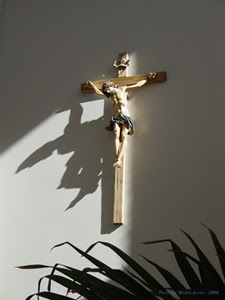 Every now and then I encounter a line I wish I had written.  This is such a line.  Faith by osmosis is dead.  If ever there was a time when cultural Christianity would prove itself unable for the task, this is that time.  Where we might have gotten away with a less rigorous, more nuanced, and even habitual faith, our age demands much more from us.  We must be ready to give answer for the hope that is within us -- even within our homes and among our family members!

Parents cannot wait for the Church to step up to the job of catechizing their children.  They must do a better job at home and by example.  The Church must not allow catechesis to be simply one course and must call the people of God to a lifelong journey of catechesis in which there is no end in sight until God calls us home.  Repentance will need to be more than a church word but a personal word that defines our daily lives within the faith before the Lord.  Our witness must be more deliberate and oblique references to the faith will not suffice.

We have lived too long with a lukewarm, pick-and-choose style Christianity.  This kind of faith will not long survive in a world where contending for the Gospel will certainly come at some cost.  If we are going to be Lutheran, we will need to be real Lutherans -- the kind who take our Confessions seriously, who speak according to the Catechisms, and who worship like Lutherans on Sunday morning.  Any other kind of Lutheranism will surely not survive the pressures of the unfriendly culture and political wilderness that appears on the horizon. The old kind of Lutheranism that was Protestantism with a twist will not survive.  We will need to distinguish ourselves not as the fearful whose goal is to survive but as the confident who believe the promises of God and who see with eyes of faith the outcome of the faith and our own future.

I am NOT talking about ramping up the excitement or the enthusiasm but about taking seriously the Word of the Lord, His action and work in the means of grace, and the intention to be the Body of Christ.  We have seen much of what we thought were friendly elements of the cultural and political landscape turn against the Lord and His Word.  That we have had our eyes opened is not a bad thing.  It is a good thing to be awakened from our complacency and to be renewed and refreshed in our baptismal identity.

The Law is not the only thing that is offensive.  The Gospel is as well.  Both offend the climate of a world intent upon pleasure at any cost and preference as the supreme and highest value.  It is shocking to speak a Law which always accuses, always convicts the sinners as to his sin, and always closes the door to self-righteousness.  It is shocking to speak of a sinful people so mired in death that they cannot free themselves, that God must become His people's Savior, that salvation is born of suffering and death, and that the freedom this Gospel bestows has a higher calling than selfish desire and self-expression.

The Church has always been a missionary enterprise -- even though it is true we have tried to forget it.  Maybe the persecution of God's people for righteousness' sake and the suffering of a people for the sake of Christ will distract us enough from the moment to see more clearly the eternal future God has prepared for us.  Maybe the worst thing for the Church and the kingdom is not a war with a culture unfriendly to virtue or to the values of the kingdom.

But do not fear and do not lose hope.  We are not fighting a losing battle when we fight the good fight of faith.  The victory is already ours -- hidden and not obvious to the eye or to the mind.  We see this victory in the cross where sin was claimed and killed, where death itself died, and where life was born never to die again.  We see this in baptismal water churning with the breath of the Spirit to grasp hold of and rejoice in this eternal life.  We see this in bread that hides Christ's body and the wine that hides His blood -- only with faith can we taste Him and rejoice in His goodness.  We hear this in the Word that is not symbol or mere historical record but living voice that speaks and reclaims, that addresses and restores the lost to life and the unworthy to an alien righteousness gifted to us in Christ.

Forty-six years ago the man who would before Benedict XVI wrote:  From the crisis of today a new Church of tomorrow will emerge—a Church that has lost much. She will become small and will have to start afresh more or less from the beginning. She will no longer be able to inhabit many of the edifices she built in prosperity. As the number of her adherents diminishes, so she will lose many of her social privileges. In contrast to an earlier age, she will be seen much more as a voluntary society, entered only be free decision . . . But in all [this] . . . the Church will find her essence afresh and with full conviction in that which was always at her center: faith in the triune God, in Jesus Christ, the son of God made man, in the presence of the Spirit until the end of the world.  (Faith and the Future)

We live in a world where the last vestiges of the sacred are being stripped away from the culture, when faith is being challenged and rejected even by those who claim to be in the midst of the Church, and when the sacred character of life is discarded for a utilitarianism that serves the whim and desire of the moment.  But the Lord will not abandon us and the cause of Christ will not be overcome.  We shall overcome.  Do not fear.  He is faithful.  He will do it.  What we judge impossible, He will bring to pass.  Do not grow weary of well-doing.  Do not given into bitterness and anger.  Perhaps now we see more clearly than we have for a very long time the nature of the battle, the stakes of the warfare, the urgency of the cause, and the victory of Christ which will not disappoint us!
Posted by Pastor Peters at 6:00 AM