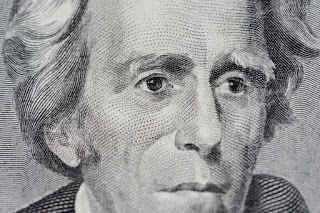 FWIW I live not that far from Andrew Jackson's Hermitage, on a street named after his daughter, Rachel, in a subdivision in which all the streets owe homage to him.  That said I can see why Tennesseans might not be so quick to rejoice over the replacement of a populist icon with another heroic icon -- this one of the Civil War (or as some down here call it, the War of Northern Aggression) and the freedom of slaves.  I have some things to say about legislating how we remember history or the honor we bestow by putting someone's face on currency but I will skip that for now.  In an age in which $100 buys less than ever, I would have put her face on a brand new $250 bill which is about what you need to purchase what $100 bought when I was a kid!

My point is that we remember figures from history in ways that forget the significant things about them or try to separate their accomplishments from their person.  Harriet Tubman is a curious hero to the liberals in the ivy league schools and feminist movement.  She was, as one writer put it, a black, Republican, gun-toting, veterans’ activist, with ninja-like spy skills and strong Christian beliefs.  She has too many black marks on her to be a modern day liberal.  She was, after all, a Republican and no liberal with his or her salt can possibly be a Republican.  Even Obama raised concerns about the credentials of Abraham Lincoln so how could he unequivocally endorse Tubman?  She was a gun toting woman in an age in which so many live in the fantasy that people do not kill people, guns kill people.  She was an activist for veterans in an age when so many wish the military would disappear or morph into a social experiment.  She was a spy in an age when cyber spying is considered a terrible problem (at least for those who do it against us) and we are uncertain of the right morality - personal privacy not to unlock a cell phone or to abandon the pretense of privacy and get all we can from it.  Finally, perhaps her greatest offense, she was a Christian -- a militant, activist of a Christian woman intent upon bringing the Gospel to every person.  Living in an age in which freedom of religion is being reshaped into mere freedom for private worship, how can we revere a woman who would argue with the liberal platform of any political party that would deny her the right to speak as a Christian and for Christianity in the public square?

Underneath all of this is that we pick and choose our heroes from the past but we sanitize the memory and either conveniently forget their foibles or use them to disqualify those whom we do not like.  This may work to pick and choose whose images adorn our currency but this is not real history and it gives us as much a slanted view of ourselves as it does the people of our past.  Harriet Tubman is a fine choice for our currency if we want to add new faces but in choosing her we must embrace the whole of who she was or her image is as fake as the images of others we revere but do not really know.

To be very direct and truthful, the only reason Harriet Tubman was selected is for the exact same reason Obama was elected President. It was skin color. It is to make an inclusive statement and even if the biography of each must be softened and sanitized. As for Obama, whose Leftist connections, lack of real political contributions as Senator, his primary concentration as community activist, his divisive and anti-white sentiments, his past associations with disreputable radicals, his past cocaine and drug use....very little vetting by his adoring media friends...incorporated and whitewashed into a false image, gave the country chaos and polarization. Obama's cavalier and imperial executive declarations to open the local ladies room to troubled men who decline to be men on any given day...and his otger bypasses of Congress and the American people should say something about the sordid nature of politics, especially today. Harriet Tubman, if she were living today, would be castigated like Clarence Thomas, Ben Carson, Condelleza Rice, and any other Black American who does not follow the the same beliefs as Sharpton, Obama, and others in the radical camp. So, we must conclude that Tubman's name came up because they wanted a Black American....but they want you to forget about her Republicanism, her values, and most of all, her Christian Faith. Her usefulness is restricted to her skin color, not the other details of her life.