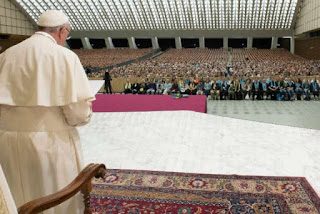 Meeting with Lutherans in Rome on October 13, 2016, Pope Francis was asked about what he likes and doesn’t like in the Lutheran ecclesial community.  The Pope said he likes Lutherans who are active followers of Christ, while he dislikes Christians who are hypocritical or who have a lukewarm faith.  “I like all the good Lutherans, eh?” he said. “There are many good ones, the Lutherans who really follow Jesus Christ. On the other hand, I don’t like lukewarm Catholics or lukewarm Lutherans.”

Imagine that.  The Pope wants Lutherans to be good Lutherans or not at all.  Hmmm.  Was he reading my mind?  Was he reading the minds of so many Confessional Lutherans?  Hard to say.  His point is well taken.  The path to ecumenical renewal will not lie with lukewarm Roman Catholics and lukewarm Lutherans getting together.  If there is an ecumenical hope, it will grow out of the desire to fully embrace the identity of both partners.  In addition, no religious tradition is helped when its adherents are ho-hum about what their church believes, confesses, and teaches.

Normally I would not comment but I cannot help but focus on the words of Pope Francis and the irony of a Pope telling us Lutherans to shape up and take our faith seriously.  Interesting. . .

In addition Pope Francis said:  "In being of service to the most needy we experience already that we are united: it is the mercy of God that unites us."  While theologians speak of doctrine, the faithful act in mercy, according to Francis.  It sounds good but in reality doctrine in not merely the purview of the theologian.  We are all guardians of the sacred deposit and witnesses to a Gospel that is certainly evident in works but no less in faithful words (sound teaching).


“The Apostle Paul tells us that, by virtue of our baptism, we all form the one Body of Christ. The different members, in fact, are one body.”  The Pope went on to say, “This is why we belong to each other and when one suffers, all suffer, when one rejoices, all rejoice (cf. 1 Cor 12.12 to 26). Let us continue with confidence on our ecumenical journey, because we know that, beyond the many open questions that still separate us, we are already united. What unites us is much more than what divides us.”

Interesting words from a Pope who as recently as 2014 republished an article written in 1985 in which he blamed Luther and the Reformation for most of the ills of society and branded them as heretics.  While I agree that there is much that unites, there is still much that divides us and as good as good works are for the benefit of our neighbor there is no less a need to confront doctrine and truth in the light of the Scriptures.

The pope met with a group of people on a pilgrimage from Germany. Were these people members of the Independent Evangelical - Lutheran Church (Selbständige Evangelisch-Lutherische Kirche - SELK)? Those would be the only Lutherans in Germany, if one goes by the partner churches of the Missouri Synod as well as the International Lutheran Council.