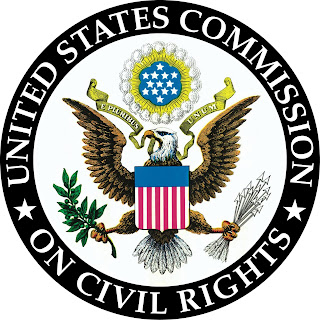 From the US Commission on Civil Rights comes the rather shocking decision that religious freedom is secondary to civil rights, specifically protecting the claims of the transgendered, among others, from religious exemption.  While this is not unpredictable, it is a surprise and, though without the force of law, it clearly defines the direction of the future.

Nearly 225 years after the ratification of the First Amendment to the U.S. Constitution, the cause of conscience protected by the principles of “no establishment” and “free exercise” may be losing support in the minds and hearts of the American people.
Appeals by religious individuals and groups for exemption from government laws and regulations that substantially burden religious practice are increasingly unpopular and controversial. So much so that many in the media have taken to using scare quotes, transforming religious freedom into “religious freedom.”

Now the U.S. Commission on Civil Rights appears to be recommending that we make it official: Our first freedom is first no more.  According to a commission report released Sept. 7, “civil rights protections ensuring nondiscrimination, as embodied in the Constitution, laws, and policies, are of preeminent importance in American jurisprudence.”

If we accept this assertion, it means that conflicts between religious freedom and nondiscrimination principles are resolved by denying accommodation for religious conscience — except perhaps in very rare and narrow circumstances.

According to the findings of the commission:
“Religious exemptions to the protections of civil rights based upon classifications such as race, color, national origin, sex, disability status, sexual orientation, and gender identity, when they are permissible, significantly infringe upon those civil rights.”
The findings and recommendations of the U.S. Commission on Civil Rights — an independent, bipartisan, fact-finding federal agency — carry weight with government officials responsible for national civil rights policy and enforcement.

This represents a significant advance for a relatively new class of folks to receive the full support and protection of civil rights and it also departs from the tradition of the past in which religious exemption was considered at least an equal, if not primary right.  What this does is marginalize all those religious institutions and churches who object on religious grounds to homosexuality or to the transgendered and gives justification for the loss of the rights of these organizations and those individuals who belong to them.  While this is certainly predictable, what is surprising is how quickly the umbrella of civil rights have come to cover the whole plethora of gender identities and, in particular, the idea that religious objections lack substance or merit for consideration in dealing with the rights of the GLBTQ community.  The squeeze is on and has been on for a while as churches are increasingly pushed to the sideline and the freedom of religion demoted in importance.  In short, there is no end in sight for the manufactured rights not envisioned by the framers of the constitution and no limit to what may trump the freedom of religion all in the name of progress.
Posted by Pastor Peters at 6:00 AM

It is so sad isn't it? This nation we love is entering a new era, an era of persecution of Christians and all politically incorrect miscreants who will not comply with an ideologically coercive social order. The Left is on the move, and they have joined with agnostics and atheists to declare that God and His people have no place here any longer....that is unless you are willing to place your faith secondarily to the state, and a historically new and diabolical state is emerging indeed.We will likely see eventual registration and licensing of churches and the removal of such licenses when a church violates transgender rules or whatever policy the state implements. We arrived at this place over many decades, and many influential citizens today have been waging cultural warfare against Christianity. I for one have no doubt that there are men and women of conscience and boldness who will confront what may become an unsettling future for the expression of our Christian religion in America. It is time to let go of apathy and indifference and contend for the faith.

Will be interesting to see how this goes (if ever it does) when Islamic faith is "infringed upon."

The U.S. Commission on Civil Rights have no authority except to spend your money holding pompous public meetings, issuing press releases, and publishing reports that are as worthless as used toilet paper. Dominated by Demonicrats and "Independents", the Commission now does little more than give aid and comfort to the enemy and betray the Constitution of the United States.

Here is the referenced Commission's report, Peaceful Coexistence: Reconciling Nondiscrimination Principles with Civil Liberties, a briefing on March 22, 2013, to hear the views of scholars and legal advocates on the scope of constitutional and statutory guarantees of free exercise of religion. The meeting heard the from eleven panelists (see their statements starting on p. 173 and their biographies starting on p. 291)

The findings are on p. 25 and the recommendations are on p.26.

One finding: [R]eligious doctrines that were widely accepted at one time came to be deemed highly discriminatory, such as slavery, homosexuality bans, and unequal treatment of women, and that what is considered within the purview of religious autonomy at one time would likely change."

The Report also stated (p. 21): "Leslie Griffin of the University of Nevada at Las Vegas Law School argued that religious liberty under the First Amendment should not be protected if expressed in conduct rather than belief, and that religious institutions should be subject to the same nondiscrimination laws as everyone else."

Here is a picture of the USCCR members:


Be watchful and regard them as traitors to the United States of America.

Here's another example of treachery against the Constitution's First Amendment coming from the USCCR Chairman.

The Chairman of the U.S. Commission on Civil Rights (USCCR) attacked proponents of religious liberty in a recent statement, suggesting that it is simply a justification for bigotry, prejudice and discrimination.

The Obama-appointed chairman, Martin R. Castro, stated [Report, p.29] that the “phrases ‘religious liberty’ and ‘religious freedom’ will stand for nothing except hypocrisy so long as they remain code words for discrimination, intolerance, racism, sexism, homophobia, Islamophobia or any form of intolerance.”

Castro further declared that “today, as in past, religion is being used as both a weapon and a shield by those seeking to deny others equality.”

“We now see ‘religious liberty’ arguments sneaking their way back into our political and constitutional discourse,” Castro said, “in an effort to undermine the rights of some Americans.”

And if you think Castro's words are traitorous, think about what Christians will face if Traitorhellary becomes President.