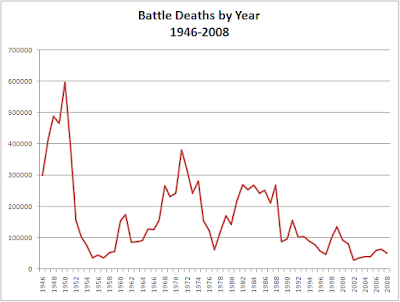 The common myth, fed certainly by the 24 hour news cycle and the need to keep us tuned into the media, is that violence, war, and terror are more today than every before.  It is a common perception but it is a myth.  Violence around the world is actually on the decline when viewed over the expanse of time. The truth is that there are less wars and less people dying in wars than there have been in long, long time.  It certainly does not mesh with conventional wisdom or with the media's constant hawking of threats but it is true.

Everyone from Glenn Beck on one side to Harvard psychology professor Steven Pinker agree, the world has become incredibly peaceful.  It just may be that today we are in the most peaceable era in the existence of all mankind.  According to Parker, "The rate of documented direct deaths from political violence (war, terrorism, genocide and militias) in the past decade is an unprecedented few hundredths of a percentage point."

Of course, the rate of violence declines but the increase in population means that there are still many people dying.  Consider that prior to 187o, there were just 50 or so independent countries and today that number has nearly quadrupled.  So there is more "friction" between the nations but fewer real wars.  Even then, the friction is not translating into armed conflicts.  Those who plot such statistics define a war as having casualties of 1,000 or more.  Sure, the armed conflicts in the Middle East has picked up a bit in the past 5-10 years, after a period of decline, but that said, the news may just give us a false picture of how dangerous the world really is.

I write this not because I think we should all breathe a sigh of relief but because too many of us have become addicted to the news, defined by our fears, and our lives shaped by threat.  I have had many people come to me who were on the verge of being crippled by their fears and have told them to start by stopping watching the news.  The news is a business and its use of technology has brought every skirmish into our own living rooms and bedrooms to the point where we live in fear of an amplified threat that is overstated and, on the other hand, we live somewhat immune to the real threats that ought to occupy our attention.

The physical threats are easier to identify but the spiritual threats are much more hidden and yet also much more real.  In our obsession with physical wars and violence, we may have grown somewhat complacent to the other side of the equation.  The loss of personal responsibility, the acceptance of a diagnosis instead of personal accountability for behavior, the victimization of our culture, the growing intolerance of those who disagree with us, and the lack of a commonly held fabric of values and history to bind our diversity together into one nation and one culture... these are just a few of the things that threaten our America every bit as much as the enemies who have their fingers on a trigger.

The peacemaking of Scripture does not paper over such real threats nor does it allow us the comfort of choosing which ills to address and which to overlook.  Now more than any other time, our culture is in need of an anchor in truth and a moral compass and Christians are uniquely poised to offer both (without falling into the trap of merely being naysayers to everything).  We need to explain and not just defend the truth of God's Word and the moral foundation built upon it.  We need to offer the real peace of God's abiding presence and abundant mercy to those who see only danger and threat in the world around them.  We also need to call us all to personal accountability and personal responsibility for the choices we make and the actions we take.

The media have not only done a great job of creating an atmosphere of fear that has distorted the reality of wars, violence, and threat.  It has also done a great job or marginalizing Christianity against the real danger to our common values and personal accountability that were once the hallmarks of our American culture and life.
Posted by Pastor Peters at 6:00 AM

I do not agree with those who say there is less violence around the world today than in previous times. The fact is that any assessment will be questionable simply because records are not accurate. Violence takes place against Christian minorities continually in Africa and in Muslim countries, and the violence in cities across America, in Mexico, in South America and Central America by gangs and drug cartels should make no one apathetic. Since history is dynamic, not static, we can most assuredly predict that a larger and more violent world war will eventually take place between the nuclear powers in the future. The casualties will be staggering and horrific. Meanwhile, here in America, spiritual warfare is being waged against Christianity, and the skirmishes are growing into pitched battles. The Left is winning at this point. Today, a Christian news source on the Internet, reported that an elementary school in Georgia issued a directive that "all Bibles, prayers, religious materials be removed from classrooms, offices, hallways." This is a news item which the mainstream media has not covered. What else is new? "Remove Christ from our schools, they ordered, and take your Bibles with you, thank you! We will have none of it here! We will teach your children what we want them to know, and our curriculum is Godless atheism. " As for the Constutution, there are many in government, academia, and media who do not concern themselves with religious freedom, and they will simply ignore it. So if you happen to have a tract or a pocket New Testament on your desk in this Georgia school, you had better remove it before the administration charges you with misconduct. We must fight this, but I wonder if some Christians have the will.

Not included in the figure are battle deaths due to non-state conflicts, especially since 2008.

Unless there are changes brought by the industrialized states, the narrative of the 21st century will be the migration of refugees from failed, oppressive states that will disrupt the economies and governments of the Western world.

It's more of an invasion than a "migration" since the immigrants bring with them the weapon of destruction, Islam.

And in the United States, giving aid and comfort to the invasion is the Lutheran Church–Missouri Synod-supported Lutheran Immigration and Refugee Service (LIaRS) and other resettlement contractors who profit from the taxpayers' pockets to resettle inadequately-screened ISIS recruits into unsuspecting and unprotected Midwest towns.

From my experience the best Bitcoin exchange company is YoBit.