The Liturgical Movement at a Crossroads. . . 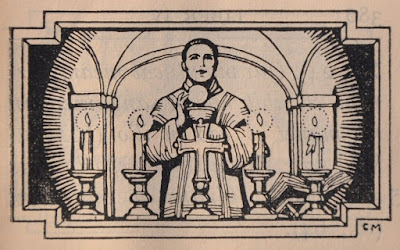 The Liturgical Movement began as a movement ad fontes, to the sources.  There was a rebirth of study and a huge crop of resources to provide us with more information than had been widely available about the history that brought us to the place where we were liturgically from the 1940s through the early 1960s.  I look over the volumes in my library with a copyright in that era and I find some splendid and rich treasures from a general liturgical perspective, from the perspective of Rome, and from my own Lutheran forbears.  Not all was good and sometimes we presumed too much from our meager efforts to find those sources but in most cases it was a flourishing of resources that fed and nourished a solid liturgical renewal.

What began at the sources evolved into something different.  For some it was an effort to recreate a pristine era in which the liturgy was unstained by the accretions of time and culture.  For others it was an opportunity to bring wholesale change to what happened on Sunday morning -- even to break with the past and promote something radically new.  For others it was a chance to bring incremental change both to purge some of what had been added and make careful and deliberate evolution of the Divine Service.

It might be said that the initial concern was not so much theoretical as it was practical -- especially for some.  It did not remain entirely practical and took on the character of an "ology" or a discipline where study of the forms took center stage from the concern for the people and the means of grace.  We saw this evolution in the Lutheran groups from the St. James Society to Una Sancta.  Rome had its own domain of the insulated scholar somewhat distant from the parish priest meeting his flock in the mass.

Now after the Liturgical Movement has come and gone and come again, we see a serious divergence in purpose and path.  On the one hand, there are those who remain in pursuit of a pure liturgy.  Others have come to see the liturgy as mere tool to be used for other purposes (diversity, feminism, GLBTQ, social justice, you name it).  Still others have re-examined the original resources and pointed out where they are lacking and attempted to find again the purest sources.  But the most helpful of those in the liturgical movement have restored this to its pastoral roots and its concern not for worship in theory but for Sunday morning and the people of God gathered around the Word and Table of the Lord.  This is where I see myself.

I am truly encouraged by the great numbers of pastors who are thoroughly knowledgeable about the Divine Service and who conduct the Divine Service with grace, reverence, and warmth.  I am encouraged by the pastoral liturgical preaching that connects the church year and the liturgy itself to the pericopes of the lectionary and weaves the whole Divine Service into one fabric.  I am encouraged by the many younger pastors who are committed to bringing their parishes into the catholic identity our own Augustana proclaimed and prescribed as the Lutheran genius.  Yet in the midst of all of this have come changes and issues that none in the Liturgical Movement could have possibly anticipated.  Who in the 1940s-early 1960s could have foreseen the inroads of evangelicalism into Lutheranism and what our people find on Sunday morning?  Who at this time period could have predicted the advent of desk top publishing and technology that would make it possible for a local congregation literally to publish its own liturgy and hymnal every Sunday?  Who would have envisioned the erosion of catechesis, of knowledge of the Scriptures, and of denominational identity and loyalty that would have left our people ill-equipped to judge what is faithful and what is not?  Who would have an idea that the internet, social media, and communication would have made it possible for people to take things from all traditions and invent their own recipe for Christianity or even substitute the virtual reality of technology for church at all?

As a Lutheran I see this pointedly expressed in the divergence between Missouri and the ELCA.  In the hymnals it is clear that ELW and LSB have different starting points and different ending points, different influences and different purposes.  That is true not only of the liturgy but of the body of hymns.  It is also true of the character and content of the worship conferences in which both groups have influence.  Think how differently the Valpo Liturgical Institute is from the LCMS Institute on Liturgy, Preaching, and Music.  Imagine how hard it is for us to even speak the same vocabulary when the divergence between the paths has become so profound!

Rome has its own twin polarities between those who guard the post-Vatican II mass against their enemies who promote a liturgical hermeneutic of continuity and seek to recover what was lost when the Latin Mass was replaced and the high altar became a table.  In the case of Rome and Lutheranism, this liturgical divergence is not without its political counterpart.  The mass has become a symbolic battlefield in which many fights are fought but often conflicts that have nothing strictly to do with the liturgy itself.  The new confessionalism of Lutheranism throughout the world is decidedly conservative when it comes to liturgical renewal just as the face of non-beige Roman Catholicism is also conservative both doctrinally and liturgically.  Perhaps this is where a new ecumenism can be born but, if that is the case, it will begin precisely where the Reformation also began -- a people and positions similar but still far apart.
Posted by Pastor Peters at 6:00 AM