Who is facing whom? 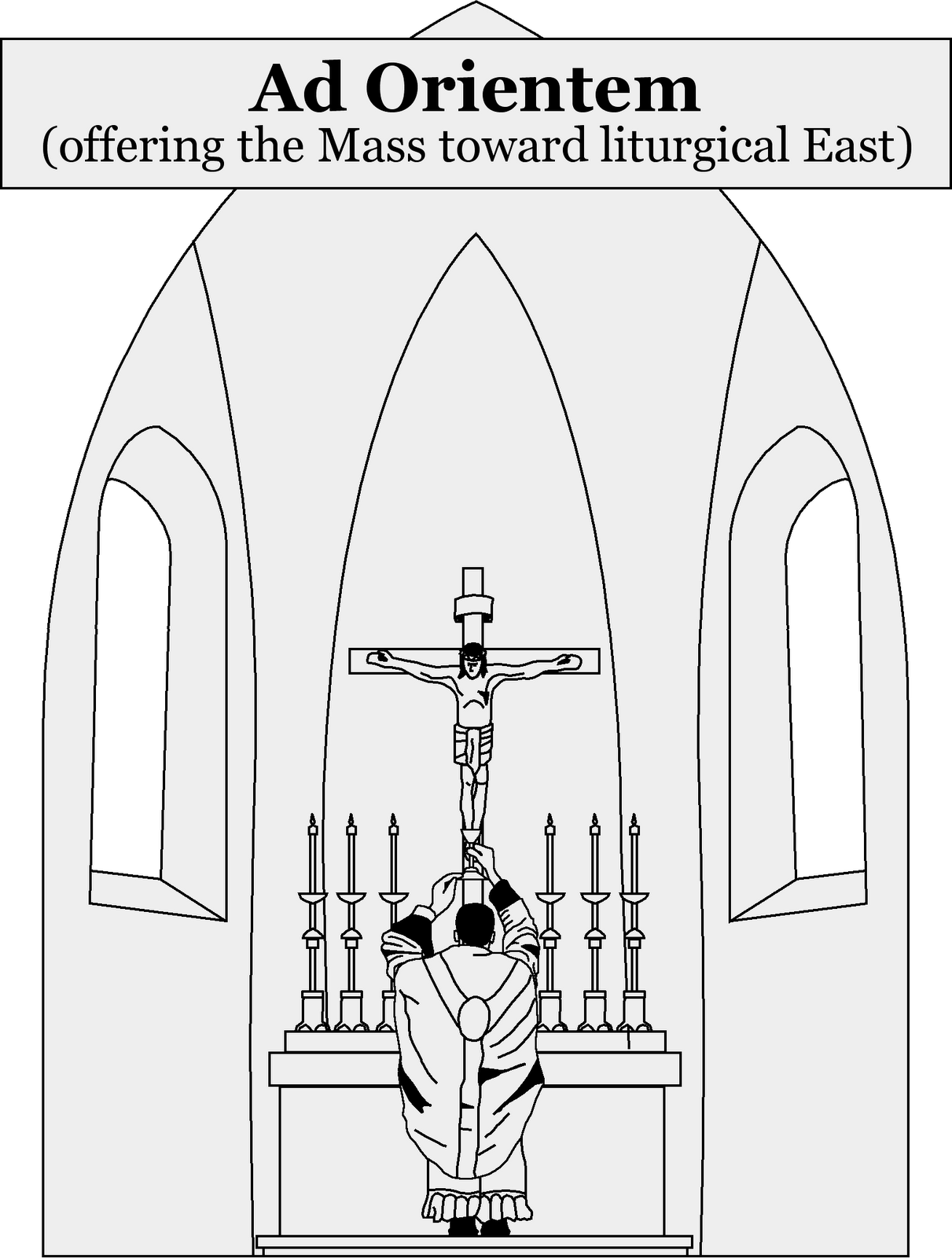 Earlier this summer Cardinal Robert Sarah, prefect of the Vatican’s Congregation for Divine Worship and the Discipline of the Sacraments, caused a stir by suggesting that the Church return to the practice of priest and people facing the same direction during the Liturgy of the Sacrament, a change the liturgical scholars describe as ad orientem.  Cardinal Sarah proposed that this change begin on the First Sunday of Advent this year.

The posture of priest and people facing the same direction in the prayer of the Canon of the Mass was introduced post Vatican II.  This versus populum position has become a big deal among those who insist on liturgical reform and those who decry the innovations of the post-Vatican II liturgical renewal.  I would suggest that the postures are somewhat misnamed.

Since the liturgy is not about us, there is no such orientation as facing the people.  It does not matter which direction the priest or the people are facing, the orientation of both priest and people is to the Lord.  Yes, I do understand the significance of the ad orientem and versus populum.  But priest and people facing the same direction or facing toward each other has marginal difference since the priest does not ever perform for the sake of a people who act as spectators.  Such is the first fallacy of ad orientem and versus populum.  The whole liturgy is toward the Lord who delights in serving us with His gifts.


The one big improvement that ad orientem might address is the problem of pastor or priest who has the mistaken idea that he is performing.  There is a continuing problem of the priest-pastor-celebrant who imposes his own personality on the liturgy.  Now that kind of personality will do the same thing whether he is facing the people or both are facing the same direction.  Yet the posture of ad orientem might discourage it a bit and for that reason we ought to give it every consideration.

The problem of performing priests/pastors and people who come to watch or be entertained is a problem not simply a matter of changing posture but of  preaching and catechesis.  This will not change by a simple reordering of who stands where but requires liturgical catechesis as well as catechesis in the faith.  If God's people are going to understand the liturgy as an act of worship that equips us for God's service, then they need faithful instruction and training.  For Lutherans this means not simply teaching them the Scriptures but teaching them the liturgy that forms the source and summit of our piety.

Part or that catechesis means confronting and deconstructing the nonsense and fallacies too many people bring to the Divine Service -- people who have no instruction to counter what they presume.   If there is a change and a pastor or priest changes from versus populum to ad orientem, that does not mean “the priest is turning his back to the people” any more that he is facing the people when he stands behind the altar.
Posted by Pastor Peters at 6:00 AM

I think which direction we face is less important to the Lord then the condition of the heart, but I personally feel it is better for pastor and the people to face the same direction, the altar, when praying together.

"The one big improvement that ad orientem might address is the problem of pastor or priest who has the mistaken idea that he is performing." Really? All liturgy is a performance of sorts, and all churches are liturgical. The issue is not whether or not the celebrant is performing, but rather it is the nature of the performance; ie representing God to the people or the people to God. It is never to be personality shtick.

THe priest is the icon of Christ, therefore he is not representing Christ to the people but is, as a matter of grace, in persona Christi.