Justice or Vengeance. . . Love or Hate 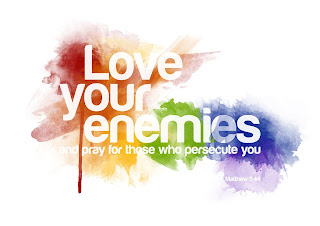 We all love it when the bad guy gets it in the end; when the school yard bully gets knocked down.  All the best movies have heroes and villains with the heroes delivering justice.  However, what we often consider to be justice is actually vengeance, driven by hate, driven by a desire to get even, to punish those who’ve done us harm.  But these things are contrary to Christ; they’re contrary to our lives as Christians, people redeemed from sin and death.  Our Lord and Savior calls us not to get even, but to repay evil and hate with love.

But you say, “Wait a minute.  What about ‘an eye for an eye and a tooth for a tooth?’  Didn’t God say that?”  Yes He did, but this isn’t what you think.  This law of retribution isn’t about revenge or getting even.  It’s about justice that seeks out equivalence.

“An eye for an eye, and a tooth for a tooth,” wasn’t a legal prescription applied literally and indiscriminately.  If a man’s eye was accidently poked out by a friend, the friend’s eye wasn’t gouged out to make all things even and fair.  If there was an accident and someone’s front two teeth were knocked out, the one who caused the accident wasn’t held down while others pulled out his two front teeth.  The law of retribution was about justice.  It treated the life and body of everyone as equal in value, regardless of their status or place in society.  And it protected the offender from excessive punishment, something we’re quite good at doling out.

In seeking revenge (our so called justice), we go over board.  Not only do we want to make people pay for what they’ve done, we want them to suffer more than we did.  We get even and then some.  Someone who embarisses us we seek to humilate and ruin their reputation.  Our brother takes a toy away from us and we inflict physical harm.  The person who cuts us in line we curse and swear, calling down God’s wrath and damnation upon them.  The person who accidentally rear ends us at the stop light we sue for all they’re worth, even if no damage was done.

All of this we do quoting “an eye for an eye, and a tooth for a tooth.”  Our sinful nature has turned this into a self-justifying phrase, allowing us to do anything and everything in the game of payback.  We usurp the law of retribution, making ourselves judge, jury, and executioner, fulfilling our lust for blood and vengeance.  This of course isn’t what God intended.

Like last week’s Gospel, we hear Jesus rightly teach His disciples the full meaning and truth of God’s commands.  He explains to them that they’re not to seek vengeance.  Christ isn’t teaching pacifism here though.  Rather, He’s calling His disciples, all followers, you and me to lives filled with generosity and love, instead of lives filled with grudges and revenge.  “If anyone would sue you and take your tunic, let him have your cloak as well.  And if anyone forces you to go one mile, go with him two miles.  Give to the one who begs of you, and do not refuse the one who would borrow from you” (Mt 5:40-42).

As followers of Christ, we are to live peaceful lives with others, generous lives going above and beyond for others.  We’re not to repay evil with more evil, but overcome it with good, with love (Rm 12:18-21).  And this extends even beyond our actions.  It also includes what’s in our hearts.
Jesus continues “You have heard it said, ‘You shall love your neighbor and hate your enemy.’ But I say to you, Love your enemies and pray for those who persecute you” (Mt 5:43-44).  Unlike “an eye for an eye, and a tooth for a tooth,” this isn’t from God.  No where did God ever say to hate your enemies.  This teaching is completely from us sinners.  It comes from our sinful desire for vengeance.

It’s easy to hate those who’ve wronged us; it comes naturally.  We don’t have to practice this.  The problem is hate isn’t just a disliking of someone.  Hate is a desire for bad things to happen to them, either by our hands or someone else’s.  Hate is what causes us to smile when bad things happen to them and say, “Good, they got what they deserved.”  But there’s no room for hate in the hearts of Christ’s redeemed.  We’ve been given new and clean hearts, hearts that are filled with love for neighbors and for our enemies.

And again, this love isn’t just a warm fuzzy feeling.  It’s an attitude of good intention that’s fulfilled in action.  This love is seen in acts of service.  We love our enemies not just in feelings, but in words and actions, doing good for them, helping them, praying for them.
But why?  Why should we love those who hate us?  This isn’t fair and it’s not logical.  It’s not easy to repay hate with love.  That’s right, it’s not easy to love our enemies, but that’s what we’re called to do, because that’s what God does.

God loves our enemies unconditionally, just as He loves you unconditionally.  Just as He gave you life and cares for you, so too has He given them life and cares for them.  “He makes His sun rise on the evil and on the good, and sends rain on the just and the unjust” (Mt 5:45b).  God cares and loves everyone equally, whether they’re Christian or not; that’s why He gave the law of retribution, to show that all human life is equal in value….And it’s because of this same unconditional, indiscriminate love that God ultimately fulfilled the law of retribution Himself when He punished His only begotten Son in our place.

We’re God’s enemies.  We’re sinners, separated from God, standing in direct opposition to Him.  Even though He’s given us life, we act as our own gods.  We steal justice away from Him.  We blaspheme Him with our words and actions, and because of this, we rightly deserve death at His hand.  This isn’t vengeance, but true justice.  The wages of sin is death, therefore we must die.  That’s fair, that fulfills the law of retribution...but that’s not what you receive.

Even though you’re enemies of God, He is gracious and merciful to you, redeeming you from your sin (Rm 5:10).  In unconditional love, He punished His perfect Son in your place.  Jesus suffered the ultimate form of capital punishment on the cross.  Unfairly, He died for your sins and God gives you His righteousness.  You’re declared innocent, no longer an enemy.  You’re covered in Christ’s righteousness and you’re perfect in God’s sight, being perfect, just as your Father is perfect (Mt 5:48).

God sent His Son to die for you, for all people, including your enemies, those who hate and harm you.  Christ’s death paid for your sins, and theirs.  God’s love in Christ forgives you your sins, and enables you to forgive those who sin against you.  It’s not easy to love our enemies, to repay hate with love, to turn the other cheek.  In fact, this may be the most difficult thing to do at times, and yet as forgiven children of God, that’s what we’re to do, and with the help of the Holy Spirit, that’s what we do.  With hearts that have been created new and made holy, with faith that knows how much we’ve been forgiven, we forgive others.  We repay hate with love, with God’s love shown forth in Christ Jesus.  In His name...Amen.
Posted by Pastor Peters at 6:00 AM