On the development of doctrine. . . 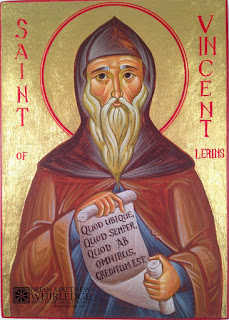 St Vincent of Lérins firmly rejected the possibility of new revelation.  “What is the deposit?” he replies: “It is that which you believed, not that which you invented.”  Yet at the same time, St. Vincent not only admits but is positive about the theological growth that confesses that revelation.  The author of the famous dictim that defines catholicity, Vincent understands proper theological development as the move to confess ever more clearly what is believed and confessed always and everywhere.  So doctrine moves from the implicit to the explicit, much the way that the Trinity, which is not new, unfolds and becomes ever clearer both in confession before the world and when challenged by heresy.  Again, St. Vincent: “By your explanations, let that which was believed obscurely now be understood clearly. What antiquity venerated without comprehension, let posterity now understand.”

John Henry Newman wrestled with St. Vincent's words and with the question of doctrinal development.  He found too narrow the scholastic idea that doctrinal development consisted of the Church logically deducing new truths from accepted premises.  Newman was much more friendly to the idea of doctrinal development that St. Vincent and yet even Newman left boundaries, insisting that legitimate doctrinal development maintains its essential continuity with the original revelation and does not exceed it.  Yet even Newman seemed intent upon reconciling doctrinal invention of the Popes, treating the Immaculate Conception of Mary (objected to by Protestants and Orthodox alike) by suggesting  that if the Apostle Paul had been asked “whether or not our Lady had the grace of the Spirit anticipating all sin whatever, including Adam’s imputed sin, I think he would have answered in the affirmative. If he never was asked the question, I should say he had in his mind the decision in 1854 in confusio or implicité” (“Letter to Flanagan,” p. 159).


An advance, then, as opposed to a change, works out an implicit but inchoate teaching, without compromising what is already “plain and clear” and all the while retaining whatever has already been established. By implication, a change violates this norm—either by introducing something entirely new, or else by contradicting what is already manifest, or even by abandoning an established definition. According to Vincent not all variations that occur throughout time are changes (which are by definition illegitimate): some of them are advances (which are by definition legitimate). The examples that Vincent gives to illustrate an advance come from the councils of the church, when occasionally it was necessary to introduce a new word “for the better understanding, never for a new interpretation of the Faith.” On the basis of this distinction, Vincent was prepared to denounce heresy. (Remember the Days of Old, p. 66)

In the end Newman, who first rejects the Vincentian canon of catholicity, ends up reinterpreting it to make room for legitimate development which, it can only be said, is left to papal wisdom to recognize and define -- something Lutherans, Protestants, and the Orthodox will dispute.  How can it be said that the claims of papal supremacy, for example, reflect the harmonious development from the early Christian position?  And the list of questions goes on -- for if there is legitimate doctrinal development that can allow for such "invention" (too strong a word?) then who gets to determine what is legitimate and what is not?  That is the big question and the hole Newman leaves.


Blessed St. Vincent of Lérins: 'Development' in the Christian Church and in her Doctrine: Development must take place eodem sensu eademque sententia [keeping the same meaning and the same judgment/opinion].  Lutherans can live with that.  Rome cannot.  Elucidation but not invention, iron sharpening iron to clarify and confess in response to question or challenge, but not novelty.  This is the opposite of the Vincentian dictim and the Lutheran claims in the Augustana!
Posted by Pastor Peters at 6:00 AM