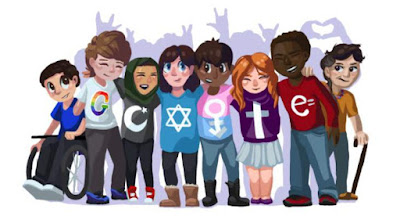 Imagine my surprise (okay, I was not all that surprised) to receive the June issue of The Living Lutheran (denominational magazine of the ELCA) and find on the cover a version of the familiar coexist logo that puts all religions on the same plane.  It was the photo for the cover story entitled, "E Puribus Unum Deus -  Out of many, one God."  The article began with a rehearsal of ELCA efforts to bridge the gap with non-Christians.  Some of the accomplishments:
The logo noted on the cover was created by a 15 year old member of Good Shepherd Lutheran Church, Monroe, CT, and featured teens with tee-shirts featuring symbols of Islam, Judaism, Christianity, LGBT pride, gender non-conformity, and disability rights.   The teen spoke of her own friendships across religious and atheistic lines and how proud she is that her pastor will allow anyone to come up for communion no matter who you are.  She was quoted as saying "Diversity is a beautiful thing."

It sounds wonderful.  So what kind of a curmudgeonly sort would say anything negative about such a kid and the cause for diversity and coexistence?  I guess that would be me.  I do not fault the teen.  She knows what she has been taught and she belongs to a church body that glories in diversity, that consistently confuses social advocacy for witnessing the Gospel of Jesus Christ crucified and risen, and insists that truth is known in bits and pieces where you find it (no church is more in the know about God and love than any other or even the non-religious!).  Certainly I neither advocate nor condone violence based upon religion.  God is ashamed of the way we have used His name to justify and advance our own prejudice and bigotry.  We all know that.  But the answer is not sacrificing the genuine truth of Christ crucified and risen in order to foster a beautiful coexistence in which no one may be right but neither is anyone wrong.  Strangely, the violence against the unborn remains safe ground, especially for a church body that finds it harder to say yes to the child in the womb than it does no to the exclusivity of the Gospel.  And that is a problem for the official line from a church body that claims to confess without hesitation the creeds and to hold to the Confessions of the Evangelical Lutheran Church.

But peruse the journal a little more and you find an article entitled "Unity in Diversity."  The article heralds the 20th anniversary of an agreement to disagree, the full communion declaration between the ELCA and three Reformed bodies.  This mutual recognition of orders, sacraments, and ministries is old news but the fruits of it have now been felt by a generation in a church body that has seen its membership decline by nearly a fifth and still bleeds off people.  My point is not to demonize any non-Lutherans but to question the idea that any church can retain its doctrinal integrity in the face of such deference to ecumenism.  Better that which unites than that which divides, they say.  If doctrine divides, then that doctrine has to be relegated to the backdrop so that unity can be affirmed at all costs.

How can any church body like this retain any sense of embedded unity except by throwing away all values applied to their doctrinal stance?    Christianity is not a movement but the faith, the only faith which discloses God as He has revealed Himself.  Ours is certainly a truth in love but can never be merely one voice among several or many.  Jesus insists that He is the way, the truth, and the life.  That no one comes to the Father but through Him.  Love for neighbor is not a replacement for this Gospel nor is it the Gospel.  Without this Gospel of Jesus Christ crucified and risen through whom any and all would be saved, love rings hollow.  When a denominational journal fails in this, it raises serious questions whether the denomination itself knows the difference.
Posted by Pastor Peters at 6:00 AM

Further proof that the LCMS-CTCR was correct in describing the XXXA as "embodying apostasy from the faith once delivered to the saints."

Thus the XXXA is no longer a Christian religious organization, although some of its congregational members may still be heterodox Christians.