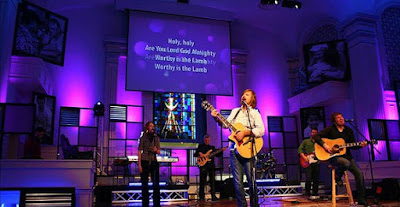 Technology begs us to follow and, too often, we do.  We rush down the untrod path of what is possible without a thought to what the cost might be down the road.  I love screens -- the bigger the better!  At least at home when I am watching Netflix or TV.  Who wants to watch a big screen intended movie on a handheld device?!  Or try to follow sports on a small screen where a bug or spot on the screen ends up being bigger than the player?! But not at church.  Give your people a break from their technology.  Don't clutter up a 19th century gothic chancel with some slick screens above or on either side (perhaps both?).  But this is not about aesthetics.  This is about the cost you pay when the hymnal is cast aside in favor of a big screen.  Far from freeing us from anything, the screen holds us captive to our technology and steals from us a corporate memory and witness handed down on the pages of the hymnal.  The cost of screens is greater than you might imagine.

You lose touch with those who went before you.  A hymnal embodies the witness in song of the saints who went before you.  The hymns collected through the ages are generally the best of the best.  They have been vetted for content and proven by usage so that they represent the best of the past.  No one is suggesting that we not add to the body of hymns we have received from those who went before us but great hymns are not revealed by their popularity in the moment.  The hymnal adds to the body of our hymnody carefully and only after a hymn has been judged worthy both in the faith it sings and its ability to be sung. A new hymnal is produced every generation or so and this prevents the songs of the people from becoming captive to one generation.  Do you want to be judged by one snapshot moment of your life?  Should we judge the faith and worship by such a moment captured in time?  It is good thing to learn the songs of the saints before you put pen to paper to write your own.  Ditch the hymnal and it is much more likely (almost universal) that you will exchange the witness of the saints before for the newest and most popular in the moment.

You lose the ability to memorize the songs.  The screen has no memory.  Those who are captive to the screen have the memory of the screen.  We know plenty of new songs through the screen -- songs that have not yet made it into print and published into a book -- but we lose our familiarity with the songs of faith we know.  Remember those movies when people were lost on some desert island?  They tried to remember the sacred texts of old and kept repeating them as they thought they went but without books they were left with a mishmash of things remembered.  Our memories are corrupted and emptied unless we refresh our memories and nothing does that more powerfully than reading (singing) from a book. How many of us can keep the great hymns in our memory without regularly singing them or reading them from the pages of a hymnal?  PowerPoint screens are great for a visual image but hard on our ability to know and recall the hymns of old and the songs of the moment.

You lose the ability to sing and the desire to sing.  Contemporary Christian music is sung best by the band and its song leader.  Unlike the metrical hymns of old, CCM is filled with accidentals and suspended rhythms and begs us to listen more than it compels us to sing.  Add to this the fact that schools do not teach us to sing as they once did and we find ourselves as people in the pew without the ability and lacking the desire to add our voices to those bellowing at us through the giant speakers that accompany those giant screens.  Volume has become the substitute for knowing the lyrics and melody.  We hear the background more than we hear the voices.  We feel the beat more than we sing the words.  The use of screens in combination with CCM begs the congregation not to join in but to clap along or sway to the rhythm of the song.  Churches have become concert halls and the music of those churches has become entertainment.

You lose the ability to carry the songs of faith with you.  Without WiFi or music on our phones, the songs of our faith are absent from where we are throughout the week.  Perhaps that is why it is so gosh darned important that we have data on those smarphones and free WiFi wherever we sip our Starbucks or eat our scones.  Though hymnals tend to be found in neat little racks on the back of pews, books are portable and do not require much technology.  Plus we do not need bluetooth speakers to share them.  Hymnals are made to be shared.  At home, in the classroom, in the hospital room, and wherever else we do.  Perhaps the greatest loss we suffer due to screens is that the hymnal no longer informs or shapes the common devotional life of the family.  Whether Lutheran or Pentecostal, the home was once a place where the faith was sung together and one of the most profound means to passing on the faith to our children was singing from a hymnal at home. 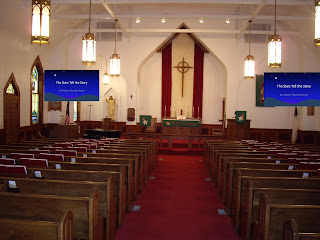 Argue with me if you want but the sad truth is that Lutheran screens are dominated not with the great hymns of old but with the newest of worship songs.  The ability and desire to sing has waned as music in worship has become more for a spectator group than a participating congregation.  The faith that once shaped us through our hymnals and informed our devotional lives at home is now informed and defined by the popular Christian artists of the sound track or radio.  Like the tendency for contemporary worship to abandon the rich and deep body of Scripture that surrounds us in liturgy, readings, and sermon and replace it with a theme text, CCM in worship has become a theme song that feeds us with little samples while the 20 course meals of the hymns with that many stanzas fed us for a lifetime.
Posted by Pastor Peters at 6:00 AM

I've heard many times from laity in several places, that when they had concerns about screens being put in their churches, they were "sold" that the screens would only have liturgy, Scripture and hymns; and not like the other churches with "entertainment" stuff. But once in place, the temptation must be too great it seems. Within a short period of time they all tell me: graphics, sermon ppt's, video clips, video of the rolling meadows and streams and such with words of the Lord's Prayer, advertisements pre- and post-service, etc. all fill the screens.

And if the service runs to long, they can put the game on.

Ironic that Martin Luther gave his congregations an active role in singing the hymnody of the Divine Service. Before that, only paid professional choirs sang in church and parishioners observed. Now the trend is to return to churchgoing as a spectator sport.
There is one other observation that can be made from experience. Much can go wrong when the church service is dependent on technology. Megachurches with a dedicated staff of techies can quickly address technical glitches and assorted difficulties and not miss a beat – no pun intended. However, for smaller churches with limited knowledgeable staff that have been trained to push a few buttons, the entire worship service can come to a standstill until troubleshooting can find and resolve the issue. Cries of “where’s the MediaShout file!” and “the left projector just went out!” can be heard across the landscape of LCMS churches dabbling with contemporary worship. One service comes to mind when the UPS started beeping incessantly and wouldn’t stop until unplugged. How embarrassing! Throw in to that an assortment of incoming text message alert ringtones going off randomly throughout the Nave and you have yourself a real cacophonic zoo. IMHO the Divine Service should be off the grid with the exception of pulpit and lectern mics and the church organ and ceiling lights and fans.

All good points posted above. Some churches today need IT people to operate the video and audio systems in place, and it is annoying to see several screens in operation during a sermon or to display the hymns. I happen to go to an LCMS which has no screens or fancy audio systems. We sing from the hymnal and actually watch the Pastor speak in real time. There is too much technology in the churches these days, but I think things will not go backwards at this time in history. People are acclimated to it in many places now.

"And if the service runs to long, they can put the game on."

Some large screen TVs have a picture-in-picture feature so you don't have to miss any game action even during the service.