Life and Technology in Conflict. . .

From an article in First Things:


Little noticed by the public, scientists have created human embryos asexually, through the same process that was used to clone Dolly the sheep. The purpose of the experiments was to obtain embryonic stem cells that would be genetic matches to the person cloned. But the potential uses of “reprogramming” technology (as it is often called, to avoid the C-word) extend beyond stem cell therapies. They include the creation of organs or cell lines for drug testing; so-called “fetal farming” (gestating fetuses in artificial wombs as sources of special-order organs); and birthing babies engineered to possess a predetermined genome. This is important stuff. As the President’s Council on Bioethics under President George W. Bush once put it, human cloning “touches fundamental aspects of our humanity,” including “identity and individuality, the meaning of having children, the difference between procreation and manufacture, and the relationship between the generations.” More, it is a key that opens the door to genetic engineering and the potential to redesign ourselves.

We have often complained that our technology is leading us where we have yet to establish values to prevent our destination from robbing us of that very humanity.  The introduction of cheap and readily available technology (the "Pill") to prevent pregnancy has had tremendous impact upon the shape of marriage and the family.  The end result is that today sex and love and marriage and children are almost independent ideas whose relationship, once sacred, has become very fragile.  The legalization of abortion has created a cottage industry for those who help women (and willing men) to discard children as if they were a hasty decision now reversed in morning light.  Though the media play it up as a right established in the wake of pregnancies the fruit of rape or other abusive context, the reality is that abortion has become merely a means of birth control, there with the "Pill", the morning after "Pill", and everything from condoms to diaphragms.  Add to this the uncertain science that sees humans as the enemy of a pristine nature and it is easy to see how the growing of fetuses for use by society is but another step. 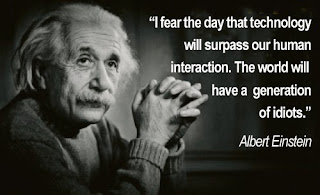 But how far do we want to do?  While there are those who insist that if we can do something, we ought to, there are also those who are growing wary of the prospect of a world in which technology informs our values instead of the other way around.  We have a history of tampering with God's creation and most all of it is to ill effect.  We have not used our technology to ennoble human life or esteem it even more highly but to make it common and ordinary.  And in the way of all of this we have not found comfort or peace or even progress.  We have found conflict that threatens the very fabric of our society, an even greater distance between the haves and the have-nots, and a world with the capacity to destroy itself now even more of a threat than during the Cold War.

The mark of humanity has always been the way we esteem life.  Is is holy and sacred, the highest of all values?  Or, is it merely a commodity to be used for purposes of gain and profit?  Clearly the issues before us are swiftly changing from the realm of the theoretical to the practical and we as Christians will be put in ever more uncomfortable positions as we ask those with the technology to pause and await the moral judgment that must be passed before we undo ourselves only because we have the ability to do so. . .
Posted by Pastor Peters at 6:00 AM