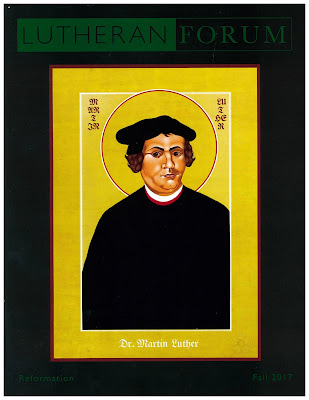 The Fall 2017 issue of The Lutheran Forum is replete with rather brief, one page observations -- all entitled Five Hundred Years Later... in obvious reference to the big Lutheran anniversary year.  I will admit to glancing at it when it came in but never got around to look at it closely.  The coffee table in my office contains the current issue of a dozen or so journals to which I subscribe so I tossed it on the stack and did not think more about it.

A few weeks ago a woman from my parish, someone rather well read and theologically astute, was waiting there to talk to me and happened upon the stack of journals.  She picked up The Lutheran Forum issue mentioned above and paged through it.  When my phone call completed and we began to talk she directed me to this issue and said that nearly all the pictures in it were of women pastors.  She wondered if there was an agenda at work in the choice of photographs.  I said I did not know.  Then I looked more closely at the issue.

Indeed there were 14 Five Hundred Years Later contributors and half were women.  Only one of the contributors was a member of the Lutheran Church Missouri Synod, and, predictably enough, it was one of the few female theology professors in the entire Synod, at Concordia, St. Paul, MN.  African Lutherans were well represented (they should be since there are so many of them).  By my rough count, six were ELCA.

There is one more thing.  The same woman commented that she found the cover art depicting Luther to be rather, well, shall we say androgynous?  I am not sure about that comment.  Most depictions of Luther are not pretty and some are downright scarey (was it not Luther who said old age makes one ugly!).

So my point. . . well, The American Lutheran Publicity Bureau was once mostly Missouri but pan-Lutheran.  Now, it seems, it has become mostly ELCA but pan-Lutheran.  I suppose it is okay; they go where the money is (don't we all).  But if they wanted at least the appearance of being even handed, perhaps they could have chosen differently.  In any case, it is a curious thing that women play so prominently in the photos and contributions given that Luther knew nothing of the ordination of women, did not advocate for it, indeed, never even conceived of it.  Apparently the whole thing is so fragile that it must be regularly pictured and featured so that those who do not ordain women will know they are not real Lutherans.  Well, I guess that is what the LCMS said of the ELCA.  Perhaps this has become a bit of a thing in the relationship between the two churches (or the lack of a relationship).  In any case, what I did not notice, one of my members did.

BTW she is not a subscriber and probably is not going to.  I, well, I will probably keep it up and see where it turns out.  Until, perhaps, retirement forces me to choose between buying adult diapers or renewing my subscription.
Posted by Pastor Peters at 6:00 AM

The American Lufauxran Publicity Bureau is Satan's tool for snaring unsuspecting, poorly-catechized Lutherans or those who are willing to schmooze with apostates.

I kinda like the guy on alpb that busts out the long Greek interpretations to deconstruct everyone's arguments and prove that every word in the Bible has multiple meanings.

The ALPB has not kept up with the times. If I were an aging baby boomer with a 1960s-1970s liberal idealist mindset, then the ALPB would be for me. The liberal Lutheran experiment has failed. Therefore, there is so much bitterness among ELCA circles. Who wants to visit a web page and watch (mostly) ELCA Lutheran pastors argue with a few token LCMS pastors about redefining the basics of Lutheran Christian theology?

Prominent ELCA theologians have presided over the redefining of 2000 years of Christianity, and they honestly cannot figure out why their parishioners respond by fleeing to other Christian denominations. No one wants to attend church to hear from their pastor why they should support issues such as Black Lives Matter, the notion of white guilt, global warming, recycling, the LGBTQ agenda, gay marriage, etc. If that were the case, then there would be a thriving church on every corner in San Fransisco and in the heavily gay areas of other cities.

This is a new LCMC church that started in a central IL town earlier this year. The senior pastor and a group of the congregation left the large ELCA church when that congregation voted to endorse same sex marriage:

Dialog with the ELCA is a waste of time. The Higher Criticism approach of the Bible is flawed and has been discredited. Perhaps there is hope that the NALC and the LCMC may eventually come around to the LCMS side of things? Why aren't more ex-ELCA congregations interested in joining the LCMS?

Anyone serious about learning more about Lutheranism should turn to slick Lutheran websites that feature confessional Lutheran pastors such as Fisk, Wilken, Rosborough, and Wolfmueller.