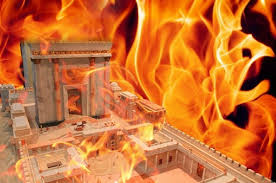 A year ago almost to the day, the Georgia Dome was imploded. Where the Olympics were held, where two Superbowls were played, where three Final Fours finished, what was then the biggest covered stadium in the world, was demolished after 25 years.  Imagine that.  But then again, we are used to it.  Life way is gone; Amazon is coming. We live in a world in which buildings come and go.  Some outlive their usefulness and are taken down.  Others fall to terrorists.  Others are destroyed by natural or manmade disaster.  We build them up, we tear them down, and we build them up again.  We are in love with this power to remake the landscape to our image.

In the days of Jesus, buildings took a long time to build.  The temple was 46 years in construction.  Timbers were hauled from far away and stones cut in quarries and then placed one on another without the benefit of modern technology and without computer aided design. Where we are impressed with new buildings, the disciples were impressed with the buildings that were there before they were born and would be long after they were dead.  We see no constant but in Jesus’ day the buildings stood for generations.

So the disciples commented to Jesus about the seeming permanence of those stone buildings in the Temple square.  Jesus knew it was all soon to pass away.  The temple made with hands, even hands that stretched over several generations would be gone and only its foundation would remain.  But there was another temple – not built with hands – that would endure forever.  Yet the disciples were not ready to hear of this.  They only wanted to know when – when will all these things take place and what are the signs that will point to them? In other words, the disciples were still focused upon building when Jesus was calling them to be focused on Him.  Could it be that we have the same problem?

The constant is not the skyline of the city or the feelings inside you or even your memories.  The constant is the Lord and His work to save a lost and condemned people.  Where we are tempted to look around us or to look inside of us, Jesus calls us to look away from ourselves or our accomplishments and to Him. “See that no one leads you astray.”  Our great temptation is not monuments to our greatness but believing in our power to tear down and make new.  This is our great temptation and what will lead us astray – not buildings but hearts that seek something new, minds that are attracted to other ideas, and voices in our ears who promise us everything but only fill us with lies.

We think that the worst thing that could ever happen is that we might not get what we want but Jesus warns against an empty religion in which everyone gets what they want, gets to do what they want, gets to worship how they want, and gets to make God do what they want.  The disciples of old thought that the world would come to an end if the great and mighty buildings that stood before they were born ever came crashing down at their feet.  We think that the world will come to an end if we cannot tear down the past and build up a new world in our own image and for our own purpose and to reflect our own values.

We are in love with the idea of a better world in which nations work out their differences and violence threatens no one, where no one is bullied or threatened by things they don’t want or like, where we can tame nature to prevent disaster, where the environment is as valuable as people, where every child is wanted, every family is happy, and every person fulfilled, where no one goes hungry or without fresh water or medical care.  It is not that these are bad things but this is not what Christ has come to accomplish.  The world is passing away and you can do nothing to stop it or slow it down or turn it around.  We are not resigned to it but look forward to what will endure – a new heavens, a new earth, and a new you.

Yet do not be anxious by the things around you – the bad you fear or the good you want to keep.  Do not surrender your hope to despair nor give up your faith in the face of trial.  The Lord is with you.  The stones of the temple may fall but the temple of Christ’s body will endure forever.  The world may be passing away but the eternal future is waiting to dawn. The Church may not be popular but she will endure; the gates of hell shall not prevail against her.

And you.  You whom the Lord has called through the voice of His Word and washed in baptismal water and forgiven your many sins and fed and nourished at His Table.  You will endure.  And those who endure shall be saved.  The world cannot hasten the day when all these things will be done nor can it bypass the time and the day when the Lord will surrender what is already passing away in order to bring forth that which is eternal.  So do not lose heart, do not great weary of well-doing, do not neglect the meeting together as is the habit of some, and do not exchange your eternal hope for a moment of fear.  God is at work in all this.

Keep your eyes fixed upon Jesus.  Make sure you know His Word well enough to spot the fakes and to uncover those who would deceive you.  Speak this eternal Gospel in every circumstance because the world cannot steal from you that which Christ has given you.  You belong to Him.  There is only one stone that will not fall and that is the stone the builders rejected.  It is the stumbling stone of those who do not believe and it is the rock of refuge on which we shall stand today, tomorrow and forever.

And you are living stones whom the Lord is building up into that eternal dwelling place, that everlasting Temple that the violence of this world cannot shake and the powers of this world cannot tear down.  You do not need to know when or how these things will take place.  All you need to know has been revealed to you in Christ Jesus, whom you know through the Word of Scripture and the means of grace.

Last week the Lord lauded the faith of the widow who gave all she had to the Temple. Now just a few verses later, Jesus says the temple will be gone.  Did that woman make a bad investment?  No, Jesus does not condemn her but lauds her faith that sees not simply buildings but the ministry that went on in them.  This is the same thing you have been asked to do in the Blessed, Chosen Generation campaign.  The building is not our goal but the work that goes on within this place.

In the end, we do not fear the fake wizards behind the curtain because the curtain has been torn from top to bottom.  It exposes those who are not real and it reveals the One who is eternal.  So keep your eyes on Christ.  Draw near with a true heart for God is with you and in you and will not now surrender you for any cause or to any enemy.  Hold fast to your faith and you shall endure and be saved.

Winston Churchill famously said that we shape our buildings and then they shape us. In other words, we fall in love with what we can do and we think what we have done is the mark of our glory.  He is surely right.  We have been undone by our accomplishments and undone by our fears time and time again.  To a people in the throws of change and decay, this is the message.  Do not be led astray.  The one who endures to the end, shall be saved.  Look to Jesus and you will be saved.  Amen.
Posted by Pastor Peters at 6:00 AM