Toward a Chinese Christianity. . . 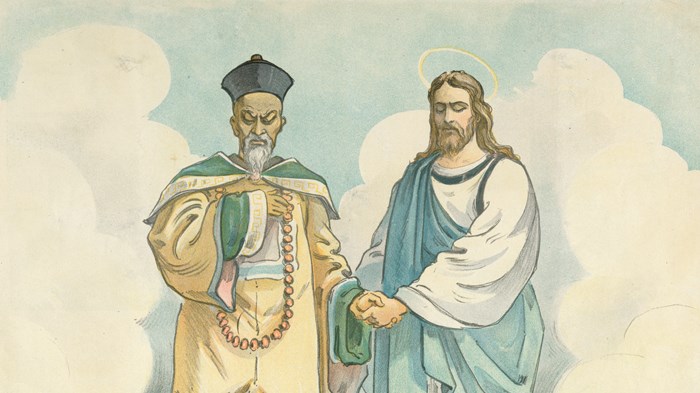 Apparently the Chinese government is moving ahead on the heels of their success with the Vatican.  This time, apparently, they are moving to transform Christianity IN China to a Chinese VERSION of Christianity, more friendly to socialism and one that has incorporated some of the wisdom of Chairman Mao into the Scriptures.  This is more than a Bible with some added material but a material revision of Christianity.

The Chinese have a plan called Sinicization with the goal of transforming the heart and soul of Christian theology and re-translating the Bible or revising biblical commentaries.  This would actually involving summarizing the Old Testament with some Buddhist additions and Confucian teachings and new commentary for the New Testament.  The five-year plan appears to be expansive, even  incorporating Chinese elements into church worship services, hymns and songs, clergy attire, and the architectural style of church buildings.  Everyone knows that between 4,000 to 6,000 crosses of state-sanctioned churches have been torn down but the churches that do have crucifixes on the inside must put up pictures of Chairman Mao and Chairman Xi [Jinping] on either side of the crucifix.  Music that begins worship will include the revolutionary songs of communist China.  In addition the state will seek to close or merge many of the state-sanctioned churches as well as step up efforts to close the more than 20,000 house churches not sanctioned by the state.


In many ways, this is even more overt and profound than the attempt of Nazis to define Christianity in a way that was friendly to Hitler and to find accommodation within Scripture for the Nazi ideology.  While hundreds of Christian leaders have condemned the effort, it remains to be seen if they will be more successful than the churches of Germany were in resisting the state sponsored control of Christian dogma, worship, and piety.  What is clear, however, is that Pope Francis recent accord with the Chinese in allowing them a role in naming bishops and exercising certain authority over Chinese Roman Catholics appears now to have been a real sell out and an encouragement to the emboldened efforts of China to do more than control the churches and to undertake an actual remake of the Christian message and identity within their borders.  All of this comes at a time when it is clear, that despite appearances, China is closing doors rather than opening them to freedom and to the West.  It also appears to justify those who suggest that our dependence upon the Chinese is providing the financial cover for their consolidation of power within their borders and their moves to strengthen their position within the world.

Of course, liberals will insist that those who cry foul are overreacting and that the same kind of cultural appropriation of the Christian faith has been done in many other places.  For the orthodox Christian community concerned about doctrinal integrity even more than personal freedom, this is very ominous.  That said, freedom is just a word unless it is accompanied by the protections of law which not only give liberty to the churches but to every believer to confess and teach without control or interference from the government -- whether in China or in the enlightened West.

Some more fruits of a Chinese Christianity and the Vatican accords. . .

It looks like the Chinese are taking a cue from Joseph Smith. The Mormons like to say that they are Christians, too. Riiiiight.