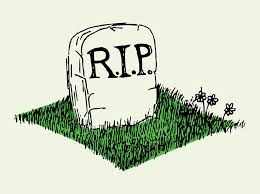 Death is increasingly the mark of our culture -- be it the funeral industry which has reshaped our practices to reflect the glory of personal preference or the abortion industry that insists that the first mark of love is not life or the self-inflicted or imposed choice of death for those whose life is not worth living or the violence that seems to mark every news cycle.  Death is the mark of our culture though we claim to promote a nobility of life.

Cardinal Robert Sarah, the head of the Vatican office for worship, once wrote that “postmodern civilization denies death, causes it, and paradoxically unceasingly exalts it.”  It is a perceptive summary of the way we deal with and fail to deal with death today.  I am sure that he would have some words for the current penchant away from the funeral and toward the celebration of the life of the deceased -- complete with humorous stories that either dismiss or do away with the reality of grief.

Certainly even Christians have adopted a pagan dualism in which the spirit is good and the body is merely a container that can be cast aside and should be so that the real me is free from all constraints.  A pleasant sentiment but that is all it is.  Like the greetings on cards or the sentimental fodder on social media, it comforts without hope and without healing balm for the wounded and broken heart.  Sadly, pastors have fed this distortion.  When was the last funeral you went to where the resurrection of the body was front and central?  Instead, even Christian clergy dance around death and its pain with the suggestion that the people are in a better place or that death has been kind in relieving their earthly sufferings or that they are surely kicking butt in heaven -- laugh, laugh, laugh.  Just as we so often fail to use the word to admit that people die (instead they “pass away, pass on,” or just “pass”), so do we fail to speak clearly the hope that we confess in the Creeds -- "the resurrection of the dead" or "the resurrection of the body."

Think of the paradox of death.  We live in a culture of death but deny the reality of death by ignoring it and its consequences. We fear the dead and silence the history that offends us, treating the past as if it were not real without our admission.  We spend all the money in the world to find the technology to prevent death and at the same time have deemed it a “human right” to euthanize and to be euthanized (a terrible word that refuses to even admit that it is about death!).  We lament the miscarriage of a child in the womb as a tragedy but promote the murder of millions of children in the womb as the first and primary right of the woman who owns the womb.  We have legalized the rental of the womb to those who want to have a child and protected with law not only the right to abort the child or prevent the pregnancy but have made everyone complicit in paying for it all - so much for the primacy of preference of values!

If we cannot deal with death and its reality, how can we speak of life and hope?  That is another paradox.  The silence that accompanies death means that about all Christianity has to offer the world is the justification and legitimization of desire and the promotion of the life you want to lead (unless it conflicts with the elite judgments of liberalism).  And so we succumb to the eulogy in place of the sermon, extolling the virtues of the dead instead of speaking clearly the promise of the resurrection of the dead that is ours in Christ, first by baptism, then in faith, feasted in foretaste at the Holy Communion, and the seal of our hope laid upon us when our breath returns to God our Maker.

The loss of the sanctoral calendar is another way that we have avoided death.  The souls of the faithful departed are not forgotten and we remember them among the saints' days and commemorations and so they become part of the liturgical and private prayer life of the Church and the faithful. So this loss is not merely a loss of a day or a story from the past but another way in which we conveniently forget that Christianity does not ignore death but meets it head on in the resurrection of Christ -- not as spirit or ghost but as the first whole man whose glorious flesh prefigures our own resurrection of the body and grand reunion with those who have gone before with the sign of faith.  A funeral is not a celebration of the life of the dead but the hope and promise that death is not what it was since Christ was raised, the first fruits of them that sleep.  We do not commend the souls to a body-less existence finally free but to the God who came in flesh to wear our sin and meet our death in our place upon the cross.  His resurrection from the dead, never to die again, is the shape of our lives and our hope and it is the comfort we have to offer a world that can little with death except normalize it or ignore it or promote it for its own ends.