A Day Bigger than Reformation Day. . . 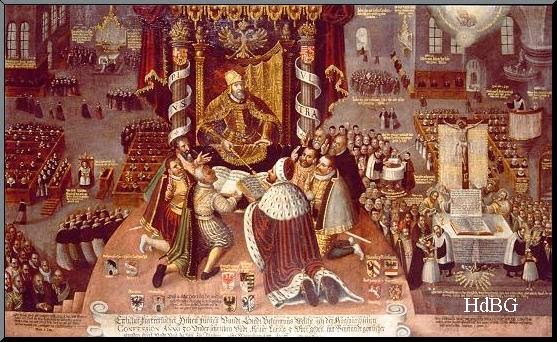 After the shot heard round the world with the posting of the 95 Theses, the Holy Roman Empire began a time of questioning, challenge, and even turmoil.  Though only 19 when he assumed the throne. Charles V was not spared a deep and profound challenge to that throne in the rise of the  Lutheran Reformation.  His desire to end the revolt was hampered by the relative balance of authority between the princes and himself.  In addition he had his own agenda that required their consent and, even more, their cooperation and finances.  Distracted by wars with the Ottoman Turks and the League of Cognac, little was done to prevent the spread of the Reformation throughout the 1520s..

By 1530 there was enough pause on the fronts to allow Charles the freedom to focus on the religious division that had arisen in Germany since the Diet of Worms in 1521.  Better late than never, Charles called an imperial Diet for Augsburg in April of 1530 to confront Luther and his agitators.

The Lutherans went to work to present their teachings.  Desiring a unified confession before the Emperor, Luther, Melanchthon, and a few other Wittenbergers had met at Torgau a month before to draft a confession now known as the “Torgau Articles.”  Luther was hamstrung by his outlaw status and was unable to travel to present this confession to Charles V so Philipp Melanchthon, a lay theologian from Wittenberg and ally of Luther went on his behalf to present their confession.  But  Melanchthon did not present the "Torgau Articles" as written.  Instead he revised them as part of a political strategy as well as a theological one.  Completed on June 23, this is what became the  “Augsburg Confession.”  Luther was on board but Charles initially refused to hear the confession.  Finally, he relented and Melanchthon read this confession before the Emperor on June 25, 1530.

Though October 31, 1517, might be the start of the Reformation, the Presentation of the Augsburg Confession is the more formal date for coalescence of individual voices into one confessional movement that gradually became known as the Lutheran Church.

With some 28 articles, the Augsburg Confession is a very positive document.  In fact, 21 of the articles were largely accepted by Rome as catholic and orthodox with only the final 7 addressing issues and calling for reforms.  So Melancthon worked with Luther and others not only to address what the reformers found to be a distortion of Scripture but also to identify this reforming work as a catholic movement, borne of the Church and living from the Church to renew what had been corrupted or distorted.  Melanchthon's many quotes and references to the Church Fathers and Church Councils from the ancient Church are meant to demonstrate Lutheran continuity and consistency with the one, holy, catholic and apostolic faith down through the ages and to imply that it was Rome who deviated from this Scriptural and confessional truth -- not the Lutherans.

Lutherans insisted that catholicity implied not only consistency with the faith down through the ages but faithfulness to the Scriptures.  Nowhere is this more profoundly shown than in the Augsburg Confession.  The Lutherans also insisted that the issues they identified and the challenges they raised showed that it was precisely a medieval distortion to this catholic faith and practice that was at fault (specifically the sweeping changes adopted in the eleventh century during the papacy of Gregory VII, sometimes referred to as the “Gregorian Revolution”).

The Lutheran contention remains.  We are not a sect.  We are not schismatics.  We are not out to begin a new church.  We are not radicals (except in the sense of adhering to Scripture and Tradition).  We are orthodox.  We are catholic.  We are renewers of the faith and not destroyers.  Perhaps if the times had allowed a real debate over these claims, thing might have been different.  But there was little desire to show the same conciliatory spirit from Charles V or the Pope.  And in the end, the Presentation of the Augsburg Confession brought no unity except to those who insisted the fidelity to Scripture is more important than fidelity to Popes and Councils.  It was a good beginning and on this day we remember with thanksgiving those who stood so boldly and yet positively for the faith as well as against error.
Posted by Pastor Peters at 6:00 AM

The presentation of the Augsburg Confession is the official "birthday" of the Lutheran Church, much more so than the 95 Theses posting and publication.

Here are a couple of inexpensive and helpful editions of the Augsburg Confession (bulk discounts available):

And for those wanting to take a deep dive into the history of the AC text, etc.

Tada!! Roman Catholic Troll here!!!!! Your arguments are old and tired No use trying to convince the willfully ignorant. Enough said.