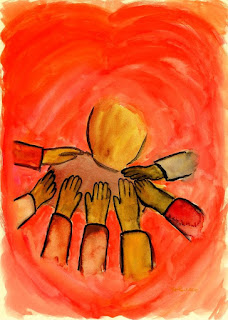 The warning against ordaining those who are new to the faith and who are new to the church has been something ignored at our peril.  Even mighty Saul went away for a time before reappearing to capture the limelight in his role as apostles to the Gentiles.  The apostles had at least three years at the feet of no less a teacher than Jesus Himself and the criteria for one who would replace Judas was that this man had been with them from the beginning and an eyewitness of Jesus.  So it comes as a curiosity when it becomes a pattern (more than once, anyway) in the Evangelical Lutheran Church in America that one with limited parish experience and even more limited experience since receiving the MDiv is elected to be bishop.  Either these are sterling candidates or else churches have other criteria to be judged more important than history, experience, longstanding reputation, and stature among the brothers.

The Rev. Yehiel Curry, Chicago, was elected June 8 to serve a six-year term as bishop of the Metropolitan Chicago Synod of the Evangelical Lutheran Church in America.  He received his MDiv in 2013.  He had worked as a mission developer (not sure exactly what that means since the term is not defined) from 2017-2013 and then pastor of the mission he developed since 2013.

The Rev. Regina M. Hassanally, the new bishop of the Southeastern Minnesota Synod of the ELCA, had 7 years of parish experience.   The runner up had 10 years (5 years in a congregation and 5 years as the communication director in the synod office). The Rev. Emily Carson, the runner up, is now an assistant to the bishop.  (Updated)

The Rev. James S. Dunlop was elected June 8 to serve a second six-year term as bishop of the Lower Susquehanna Synod of the Evangelical Lutheran Church in America (ELCA) and his only parish experience was from 2005-2013 before being elected as bishop.  He received his MDiv in 2005.  Though no spring chicken, his experience as pastor is thin at best.

The Rev. Leila Michelle Ortiz was elected bishop of the Metro DC Synod during their June 14-15 assembly.  She has served one parish as associate pastor, once as pastor-in-residence (whatever that means) and assistant to the bishop -- all since 2009.  Her experience and resume is also, well, thin.  What is more interesting is how she describes herself:


"The Rev. Leila Michelle Ortiz is a_Luthercostal; an inspired preacher, teacher, and speaker who was raised in the Pentecostal Church and addressed by the Gospel anew in the Lutheran Church. Given her spiritual formation and theological liberation, Leila dares to work with the Spirit as She restores a fractured church and heals wounded souls. Leila has a heart for serving God’s people in practical and pastoral ways. Leila is called to preach and teach in communities that wrestle with their complicity in the unjust systems present in the church and in society. She is  especially interested in co-creating sacred space with people who:"

I have written before of other candidates elected with only the most limited parish experience even if they did have more years since ordination and served in administrative posts.  I wonder then if this office (at least in the ELCA) has become largely symbolic and administrative and less oriented to the parish and to the role of the bishop as chief pastor of the synod.  Either that or the ELCA has exceptional candidates who in a very few years have demonstrated exemplary leadership as theologians, pastors, and administrators so that they won over the majority of the delegate support.

Or something else.  That something else that I worry about is that the office of bishop in the ELCA has become a symbolic office in the sense that those elected are elected precisely to be the face of change (GLBTQ issues, race issues, etc.) for a church body that has come to embrace these things over everything else as the reason for their existence and the shape of their particular ministry.  If that is the case, I fear the ELCA has drifted even further from its Lutheran identity and is seeking to make itself relevant not with the Gospel of Jesus Christ who died and rose to save sinners but as the banner bearers for the cultural issues of the day.

Apparently the warning against laying hands suddenly does not refer to those who have become standard bearers for causes that are at best alien to the Scriptures and at worse in conflict with them.  So bishop has come less to mean overseer of doctrine and life and champion of causes.  Not that this was never true but at least it was never overtly true. . . until now.

As a side note, the incorporation of gay and lesbians into episcopal offices in the ELCA continues at breakneck speed.  Guy Irwin was re-elected, Kevin Strickland was elected in the Southeastern Synod (he is married to a man), and others will surely follow.  In contrast to the slower incorporation of women into episcopal office in the ELCA, the GLBTQ ascent has happened much more quickly.
Posted by Pastor Peters at 6:00 AM

The ELCA prizes its role in the LWF as the hip, edgy, "trend setter," similar to the role of the Episcopal Church in the Anglican Communion. What's hilarious is this church body of descendants of pietist, Midwestern Scandinavians and liberal, unionist Germans trying so hard to be hipsters. It's comical. They are comical. It arouses the same level of gut level derision as Nondenom pastors with a middle aged gut and receding hairline squeezed into skinny jeans and swaying to Jesus love songs. Oh, they've read Bultmann to Pannenburg, Braaten, and Jensen, but liberation "theology," left wing identity politics, and social and environmental justice is where it's really at. Get with the times, you lame LCMS fundamentalists.

True. ELCA is a lost cause.

"The Rev. Leila Michelle Ortiz is a_Luthercostal; an inspired preacher, teacher, and speaker who was raised in the Pentecostal Church and addressed by the Gospel anew in the Lutheran Church."