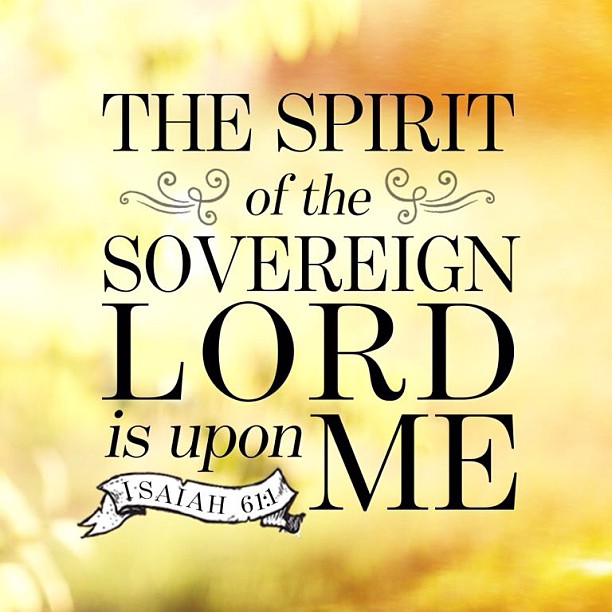 Having gladly discarded the remnants of the NIV and its tiring name for God (Sovereign Lord), I must admit that as confusing as the term was when introduced to me, it is just as confusing to know why it is good to be gone.  Poor Ezekiel, hardly known as the good news guy, suffered most from this title.  It was used more than 200 times in Ezekiel by the editors and translators of the New International Version.  So tedious a phrase and yet rather oblique.  What does it really mean?

Lutherans have learned it too well, if not the title for God then at least the poorest interpretation of that name.  We talk all the time about the God who is in control.  I have heard Lutherans say everything happens for a reason and though we do not know why now, God will tell us someday.  It is pious platitudes like this that make me want to gag.  I have heard even Lutherans discredit God by blaming him for the stupidity of man or for the effects of living as sinful people in sinful world until it just might seem that God IS to be blamed for all the bad that befalls us.  Somehow the words Sovereign Lord never fell off the tongue instinctively but the concept of a God who is large and in charge did.  I wish it had not.

In the Creed we say I believe in God the Father Almighty. . .  Now we say the creed more often that the cumbersome term Sovereign Lord passes across our lips and yet it has stuck that God is in control and can do whatever He darn pleases but it did not stick that God is Father.  You see here that Father comes before Almighty.  God cannot do what He darn pleases.  We have not limited Him but He has limited Himself.  He acts in mercy.  Even when we cannot see how His action is merciful, we trust that it is.  For God has compelled Himself to act mercifully toward us from the very first Gospel spoken to Adam and Eve until that good news became flesh and blood in Jesus Christ.  God has not stopped being Father even when we disowned Him in sinful rebellion and brought upon ourselves the curse of death.  He loved us still.  He is our Father and then He is almighty.  His almighty-ness is shown not by what He could do but in what He has done.  He has done what we could not.  He has saved us.  He became our Savior even unto death upon the cross.  Why is it we can always remember that God is in charge and blame Him when tragedy or unexplained sorrow befalls us but we cannot remember that He is our Father?

This is what Luther got.  Father, we pray, so that we might remember that He is our death father and we are His dear children.  Yes, even when we think, say, and do the same evils and manifest the same rebellious wills as Adam and Eve.  Yes, even when we are mad at God because we think He might have said "no" when we wanted Him to have said "yes."  He is still our Father.  And His almighty-ness is conditioned by His Fatherhood.  That is the Gospel.  Not that God can do whatever He darn pleases and nothing can stand in His way but that God did what He did in Christ to cover us with righteousness, to pay the price of our redemption, to suffer for our sins, and to raise us up anew as His own brothers and sisters, whom He has restored to the Father and for whom He intercedes still.  This is the Fatherhood of God at work -- not simply source of all that exists or creator of all that is or sustainer of it all but as the One who has worked through time to unfold the plan hidden from the beginning to redeem us, revealing to us love enfleshed in Christ Jesus.

Listen up Lutherans and cast aside the old haunts of the NIV.  We do not celebrate a sovereign Lord but a merciful one, one whose Fatherly love manifested in Christ shows us His almighty-ness most of all.
Posted by Pastor Peters at 6:00 AM

You have it bass-ackwards Sean. Calvinists....what can you say?

In my weaker moments I say NIV stands for "Not Inspired Version." (just kidding, sort of)

@Anonymous, I respectfully disagree with having things backwards. Also, I am not a Calvinist. The bottom line is that the Bible teaches both the sovereignty of God, and that he chooses to exercise his grace and mercy upon the objects of his creation. As a Lutheran, we can hold onto both of these things.

@Sean...God reveals, FIRST, about himself is that he is a jealous God, so deeply does He love us. The Blessed Apostle Saint John the Evangelist was given these words by the Holy Spirit: "God is love." This is the very essence of God, not "sovereignty."

It is unwise to set God's attributes against each other.

@Anonymous, what David Gray said. Again, both are true at the same time. If God is not sovereign, then he does not love. If he is not sovereign then the "love" he displays is in obligation to one greater than himself, rather than electing to love us.

Sean, you sure sound like a Reformed/Calvinist to me with your focus on "sovereignity" ...

@Anonymous, If you read my initial post above you will note that I said we celebrate both. If the initial thrust of my statement is that we don't ignore one to the detriment of the other, then I am not sure what led you to conclude that I have "focus" on God's sovereignty. Furthermore, my response to your initial reply is that the Bible teaches both, God's sovereignty and his exercise of grace and mercy. Again, as a Lutheran, I don't have to dump one scriptural truth about the nature of God to affirm another. I can hold onto both as equally true because God has revealed to us that both statements are in fact true.

Agree with Sean. God is both sovereign and merciful, and the two attributes are not mutually exclusive. How they work together is a mystery, but scripture affirms both. Lutherans embrace mystery. I will resign myself to the mystery but will affirm both, as does the Bible. The scriptures are replete with examples of God's sovereign hand in the affairs of man. Luther believed in God's sovereignty. Read Bondage of the Will, the one book about which Luther (9 years before his death) stated the following: "Regarding [the plan] to collect my writings in volumes, I am quite cool and not at all eager about it because, roused by a Saturnian hunger, I would rather see them all devoured. For I acknowledge none of them to be really a book of mine, except perhaps the one On the Bondage of the Will and the Catechism." It is a sovereign Father who appoints that His Son will die for the sins of the world. And it is a loving and merciful Father who does the same.