Of Angels and Archangels. . . 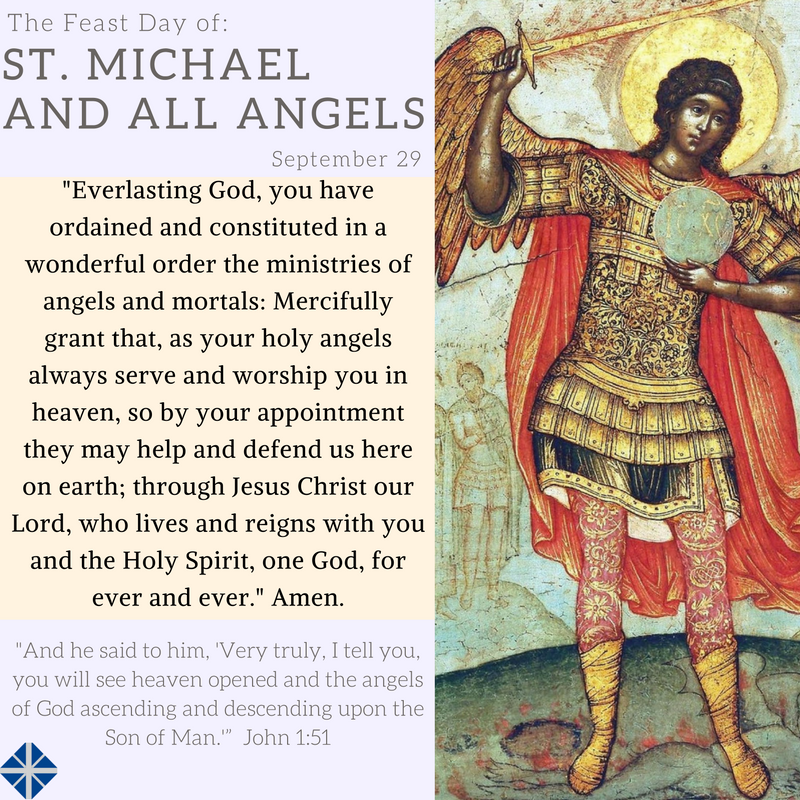 For too long we have suffered with all kinds of goofy and saccharine ideas of angels.  They have become in our minds the chubby little cherubs who send love arrows but are largely benign.  They have become mere adornments to liturgy and life.  We presume we become little angels when we die and we call obedient young children our little angels.  The angels of our imagination bear little resemblance to the Scriptures.   As we celebrate the Festival of St. Michael and All Angels (also known as Michaelmas), it might be a good time to discard these lies and legends and focus on real angels — their existence and their work.

Luther himself has spoken many words about the existence and work of the angels:  “That angels are with us is very sure, and no one should ever have doubted it.” (What Luther Says, p. 23).  Angels appear regularly throughout the Old and New Testaments, especially at the pivotal times when God acts on behalf of His people and unfolds the revelation of His Son.  We see them in the life of Christ, from the Annunciation to the Temptation to the defeat of Satan in the heavenly places in the Luke and Revelation accounts. Though it is true that angel may also refer occasionally to people and to the preincarnate Christ, there are too many other references to dismiss these spiritual creatures of God.  “He makes His angels winds, and His ministers a flame of fire” (Hebrews 1:7); “Are they not all ministering spirits sent out to serve for the sake of those who are to inherit salvation?”(Hebrews 1:10).  Angels exist by God's design and for His purpose -- to serve the unfolding revelation of His gift of salvation in Christ and to serve His people on behalf of this saving will and purpose.

The term may be angel but the meaning of that term is messenger.  Again, Luther:   “a messenger. . . Thus this name is commonly applied in Scripture to all messengers of God in heaven and on earth, whether they are the holy angels in heaven or prophets and apostles on earth. . . But the heavenly spirits in particular are called angels because they are the highest and noblest messengers of God” (What Luther Says, p. 23).  The angels are the messengers who herald the deliverance of God and when they appear they always point to what God is saying and doing.  Think how this is revealed especially in the Annunciation:  “Fear not, for behold, I bring you good news of great joy” (Luke 2:10). The angels do God's work and never pause from this holy purpose -- from their earthly assignments on behalf of God's saving grace to leading the heavenly chorus singing “Holy, Holy, Holy is the Lord God almighty.” (Revelation 4:8)  The Word on the angel's lips is always God's Word.

But angels do not always simply announce what God is doing.  They also fight against the enemies of God and of His people, thwarting the evil plans of Satan and his minions to defend His Church from their attacks. “For He will command His angels concerning you to guard you in all your ways” (Psalm 91:11). There are good angels and there are evil ones.  Christians are not captive our fears of those evil angels but we are warned clearly in Scripture to be vigilant, for “the devil prowls around like a roaring lion, seeking someone to devour” (1 Peter 5:8).   Again, Luther: “A Christian should know that he is sitting among devils and that the devil is closer to him than his coat or shirt, nay, closer than his own skin” (What Luther Says, p. 399).  Evil angels serve the devil's purpose to try to wrest us from the grasp of God's grace and from the faith that trusts in His salvation.  As Luther taught us to pray each day: “Let Your holy angel be with me, that the evil foe may have no power over me” (Luther’s Morning Prayer).  The evil angels are as frustrated as their leader for their power does not compare with the power God has given to those who do His bidding, who behold “the face of Our Lord God” and  who “stand in the presence of Him whose name is Omnipotens, the Almighty” (What Luther Says, p. 25).  Their greatest power is the Word of the Lord on their lips.  We sing this with Luther and with the generations of those who have sung with him:  "Though devils all the world should fill, All eager to devour us, We tremble not, we fear no ill; They shall not overpow’r us. This world’s prince may still Scowl fierce as he will, He can harm us none. He’s judged; the deed is done; One little word can fell him” (LSB 656:3).

In the Creed, the Church confesses not only God's creation of all things visible but those invisible, seen and unseen (angels) and in the liturgy every Divine Service the Church calls us to join “with angels and archangels, we laud and magnify Your glorious name.”   It is worth remembering that in the reform of the calendar, Luther insisted on retaining Michaelmas as a principal feast day of Christ. Today you should have heard how the Lord used Blessed Michael and the angels to deliver His people from the accusations of Satan and how the devil and his minions were cast out of heaven using the Word of Christ.

Delivered from Satan by the hand of Christ and served by His holy angels, Christians learn from them to keep the Word of the Lord upon our lips, to sing praises to the God of our salvation, and to serve the Lord in obedience and faith.  These angels teach us  humble obedience to God and how not to think of ourselves more highly than we ought.   Within those many tasks, is our care for our children, the aged, our neighbor in need, and those who suffer the afflictions of body and mind.  As Luther reminds us: “the angels do it with joy; for it is well pleasing to God.” (What Luther Says, p. 24)  They rejoice to be His servants. Within our regular gatherings around the Word and Table of the Lord, we join them in praising the goodness of Him who called us from darkness into His marvelous light, who saved us by His blood, and who has allowed us to be His people and do His work on earth as the angels do above.  “For this, now and in days to be, Our praise shall rise, O Lord, to Thee, Whom all the angel hosts adore With grateful songs forevermore” (LSB 522:8).
Posted by Pastor Peters at 6:00 AM

Công ty CP dịch thuật miền trung - MIDtrans said...
This comment has been removed by a blog administrator.
September 30, 2019 at 3:41 AM