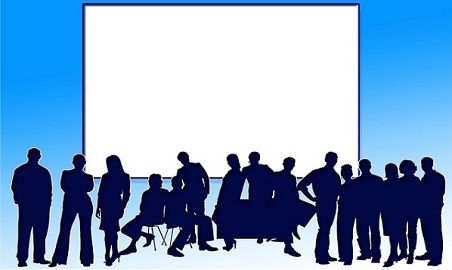 The whole nature of contemporary worship forms is a contradition.  It is an informal form which is formalized.  In other words, it is a casual thing which is forced to take on aspects of formality simply because of the scope of it all (the numbers of those attending) or the common focus upon one end.  It is, as it were, the difference between dinner in which people eat what they want alone at their tables and converse as they desire, in a world on their own AND dinner theater in which people eat and drink at their own table but focused upon the same entertainment.  Formal informality.  The goal is not to be formal but the nature of it all requires that the intentional informality take on aspects of the formal.  One person emcees the entire event.  There is a stage.  There are performers.  There is a theme or direction for what takes place.  It is informal by intention but forced to be somewhat formal simply because of what it is and the scope of it all.

Those who belong to a liturgical church but yearn for what happens in the evangelical and big box non-denominational churches have attempted to create a contemporary worship that is designed to be as minimally formal as possible.  Of course, in reality it is not informal at all.  It is scripted, planned, directed, and controlled.  The audio and the video are controlled and there is little the is as spontaneous as it wants to appear.  In fact, a great deal of work goes into making the formal appear informal, causal, spontaneous, and unscripted.  But the impression remains among those on both sides of the stage that this is casual and that the only formality permitted is the formality required to make the scripted event look casual and unscripted.

In contrast, I often describe the worship in my parish as informal formality.  It is not that we script informality but that we have an abundance of children under the age of 5 and this brings with it a certain level of informality -- even though the worship is decidedly formal, scripted by the book, ceremonial, ritual, and paced out according to the rhythm of the church  year and the liturgy.  Those who preside chant and bow and genuflect and elevate and stand certain places and hold hands a certain way.  So do many in the pews.  But at the same time, one must account for the fact that we have children whose voices are not mute, who fidget in the pew, who have to visit the restroom way too often, who sometimes munch on Cheerios, and who, although they know what is happening within the Divine Service, as still kids.  On both sides of the chancel, we acknowledge the presence of children without letting them control or direct the Divine Service.  We lead them through the Divine Service and they are absorbing what happens and learning its words and rhythm while still being, well, kids.  We are not casual about anything but we have 50-70 children at the Divine Service every week.  We are formally incorporating them into the pace and rhythm of the Divine Service while at the same time acknowledging that they are learning, they are children.

Informal formality and formal informality are not the same thing.  Formal informality is a deception.  It purports to be casual and spontaneous when it is as scripted as any high church liturgy.  It is scripted in such a way as to make it appear to be unscripted.  It is, in this respect, a lie.  Informal formality does not attempt to be anything but formal, liturgical, reverent, and ceremonial and yet it does so with a congregation of infants, children, and youth who are occasionally unscripted yet are being catechized and taught at the same time.

What I find humorous is that contemporary worship and contemporary Christian music is as well practiced and rehearsed as any liturgical service.  In fact, more so.  The liturgical service is practiced not by rehearsing its words and actions but by worshiping within its structure, language, music, and ritual.  It is practiced not by preparation but by doing and praying the liturgy.  In this respect, it is teaching the children who may seem to be casual and informal how to be formal and reverent.  It does not happen overnight.  It happens over time.  Whether you are a child in the Divine Service or a stranger to a liturgical tradition, you practice and rehearse by being there week after week after week.  It is authentic in this regard where the scripted contemporary service that tries to appear spontaneous is a deception.

As I have said before, my wandering and meandering thoughts can often go strange places. . . so it was today!
Posted by Pastor Peters at 6:00 AM