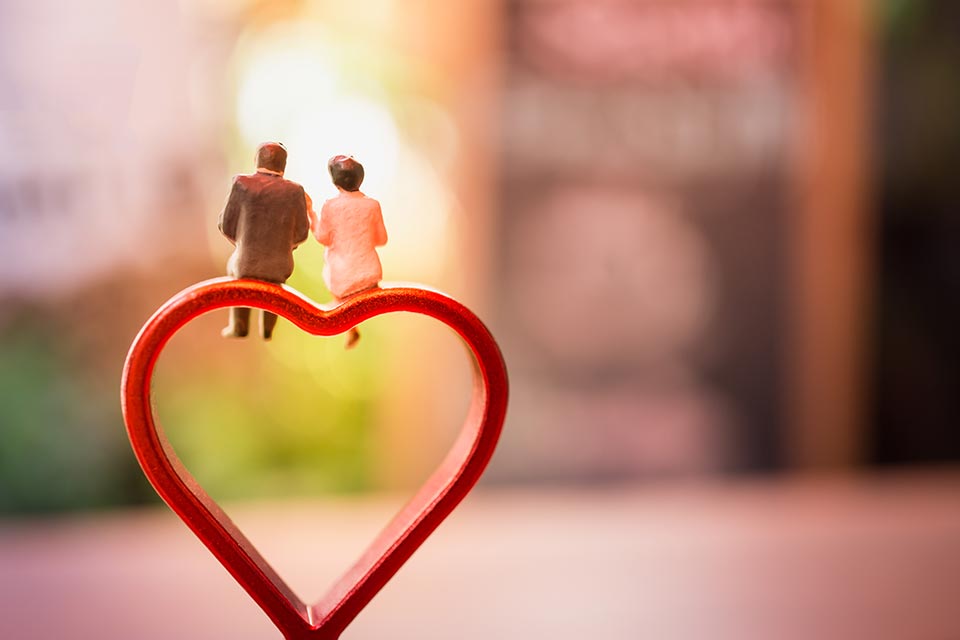 It could have been said that once marriages were arranged by families searching for that which was good for their children and if love was learned and became a part of it all, so much better, but if not still fidelity.  That model gave way to a romantic image of marriage in which people meet and fall in love and marry and somewhere along the way announce this to their families and introduce their families to each other.  Today it is less marriage than cohabitation and people try out each other like one might test drive a car, except this test drive may turn into a long term lease but still not exactly ownership.  People today struggle to find places to meet and to discern who the folks really are whom they meet (especially if the introduction first happens over social media).

In fact there is something to be said about marrying for something other than love.  Some of the most happily married people report that they did not marry for love. They may have learned to love the one they married, but that is not why they married whom they did.  They married because it became the right time for them to marry, they found people who shared their values, goals, and dreams, and they trusted these people (with their affection but even more with their futures and as prospective parents to their children).  It may sound kind of pedestrian but it does not diminish romance.  In the end, it only removes romance as the pivotal reason or factor for choosing the person whom they chose or remaining married to the person whom they married.

If there are issues we face today about love and marriage, some of those issues relate to the overwhelming burden laid upon marriage as an institution and your spouse as a person.  Today marriage itself is seen as a vehicle for personal satisfaction, contentment, and happiness.  When marriage no longer fulfills these rationales, the marriage is dissolved and the person is free to pursue another who will make these things happen.  In addition, with the shrinking number of friendships and the growing isolation of people, the pressure upon the spouse to be best friend, counselor, entertainer, inspirer, encourager, affirmer, lover, and spouse overshadows the roles and responsibilities historically expected of a spouse (partner in the responsibilities of shelter, home, life,  etc., and parent).

Love, at least the love that was traditionally spoken of in the Judeo-Christian tradition, has not been seen either exclusively or even primarily as romance but as service.  Jesus never asks us to like our neighbor but He does call us to love our neighbor, specifically as He has loved  us.  And how did He show us His love but He who should be served became the servant of us all, even to death upon the cross.  It would seem that churches have somewhat caved to the romance which is about infatuation and desire but have neglected to instruct or hold accountable those married with the love that is service and sacrifice.  It is unmistakable that this is what St. Paul is saying when he writes of submission and loving wife as Christ loved the Church.

In my own case, after over 41 years, my wife knows my faults and failings.  She may not have made her peace with them, but they do not surprise her.  They may frustrate her still but we did not marry out of any illusion of soul mate or romance that would never die.  And I could say the same about her.  What binds us together is not an idealized love but a real one which does not run from service and sacrifice.  This, I believe, is the most profound and real love there is.  Romantic love (what I mean here is the infatuation and attraction which has its source in desire) is not real.  It comes and goes.  But the marriage remains.

Some years ago I wrote of this love I witnessed in my father-in-law and mother-in-law.  He with Alzheimer's had begun to forget ordinary things and especially the more recent memories of his life.  But their love, tested and tried by the burdens of this terrible disease, did not wither or die under this new stress and challenge.  It continued to flourish.  She served him not of duty or obligation but of love and her sacrifices were willingly made in compassion and respect of this man rendered more frail by this insidious disease.  In response, he recognized this love and responded with his own devotion to her, accepting her direction, welcoming her rehearsal of memories lost to restore them as much as able, and her expectation of him to do as much as he did for as long as possible.  There is hardly a more profound and true love to be seen.  While I hope and pray my wife and I will not find ourselves in such a circumstance, I also hope and pray that we might serve and sacrifice out of love the way this couple's life together displayed. They did not marry for love but from the desire to love -- complete with all of its sacrifice and service.  Marriage was not the fruit of a love that pre-existed the vows but marriage was the garden in which love was learned, lived out, and appreciated.
Posted by Pastor Peters at 6:00 AM

Marriage between one man and one woman is God's will for us, not cohabitation outside of marriage. I think the church needs to speak to young people more diligently, and promote marriage more often. Instead, cultural and pagan values have infiltrated our society, and this problem must be addressed.

"In fact there is something to be said about marrying for something other than love."

And then there's the example of Philipp of Hesse.