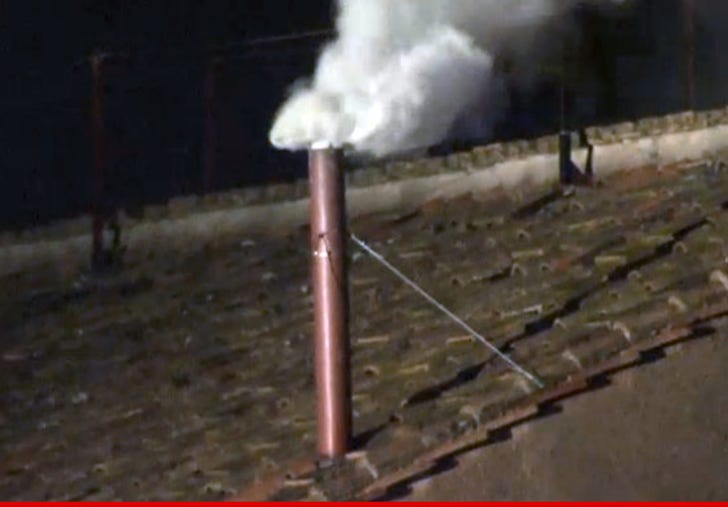 Though we have no smoke to signal the outcome, there is something similar between the election of a Synod President and the convention that follows and the conclave to elect a Pope and the flurry of activity that accompanies such an election.  Both generally are longer term outcomes.  Few popes are elected with the suspicion or hope that they will live for but a few years and few Synod elections intend or desire to see a President elected for one term.  Both have great hopes for longevity in part because in both elections there is the desire to see someone arise who will repair what is broken in the churches, heal what is divided, and give order to what is confused.  We do the same thing when we elect folks to positions of leadership in city councils, mayoral contest, governors, state legislators, Congress, and the White House.  Why would it change in the Church?

Yet there is a grave fallacy to our penchant for finding leaders who can fix us.  The fix comes from the bottom up and not from the top down.  There are no guarantees that the cream rises to the top in politics -- not in church politics or in secular politics.  While some have suggested that the Holy Spirit is guiding the hands of those who write the names on the ballots in the Sistine Chapel, Benedict XVI once suggested that the work of the Spirit is not to pick the right man but to keep the wrong one from being elected.  Congregations calling a pastor and a Lutheran Synod electing a President seek to find the godly man who will fix all that is broken and in disrepair but there is no flesh and blood that can do this (except Jesus!).  For a thousand years we have laughed at the joke that if St. Paul's credentials were presented to any call meeting or Synod nomination form, he would be the first name eliminated from the list!

We cannot afford the luxury of waiting for the perfect man to serve as pastor, bishop, pope or president.  We must take the initiative of confessing and living out as faithfully as this frail humanity may the faith where we are at.  Parishes are not saved by those elected to national or international leadership but by faithful pastors and the faithful baptized intent upon being who God has declared them to be and living out faithfully this vocation where they are right now.  That is not some hidden wisdom recently unearthed but the way it has always been.

In the wake of the confusion over two popes and the disappointment over the one who signs the documents, some Roman Catholics are beginning to look to the next conclave for a leader who can bring unity and unanimity to their church.  At best, the next pope will do no harm.  It is time to stop looking for white smoke to signal a rebirth and to work for that with the tools Christ has given in His Word and Sacraments.  Missouri Synod Lutherans need to stop beating the bushes for the right guy who will bring unity and unanimity to their church and instead for every pastor and the people in the pew to do God's bidding where they are with the resources of the means of grace God has supplied.

And while we are at it, we need to pay less attention to parachurch organizations, self-promoting gurus of growth and success, and institutes with keys to our future.

The Church is not a social organization defined by its members, governed by its elected leaders, and united by the interests, preferences, and desires of its people.  The Church exists because the Holy Spirit has called her, gathered her, enlightened her, and sanctified her through the voice of Christ's Word and the grace of His Sacraments.  We deal with sins through confession and absolution.  We are led not by the voice of reason or consensus but by the Word of God.  We are accountable to one another not because we want to be but because this is how God has ordained it.  We are not a diversity of churches each doing our own thing but one Church united by the Word, by our Symbols, by our liturgy, and by our order (especially in terms of the training, calling, ordaining, and installing of pastors).

We do not need to sit on our hands waiting for the next great demi-god who is dropped from the sky to work toward the renewal of our tired structures and relationships.  We have the resources God has supplied with His promise to work through them.  What we lack is probably what we need most of all -- confidence in the means of grace and the steadfast faith that God is at work doing what He has promised to do, according to His own timing.  So we substitute either the perfect man for the moment or our own meager efforts to grow, govern, and guide His Church and look where that has got us.  So it is time to rejoice when the white smoke signals a leader who is not the wrong man but it is also time to take up the call and do God's bidding where we are -- in the church, home, neighborhood, circuit, and district.  Then, surprise, surprise, the national church may actually improve as well.
Posted by Pastor Peters at 6:00 AM