Down the road in Nebraska (from where I grew up) a Roman Catholic parish restored its church, removing the shackles of its previous modernization, to look very much like it was.  Here is the before and after of St. Wenceslaus, Wahoo, NE. 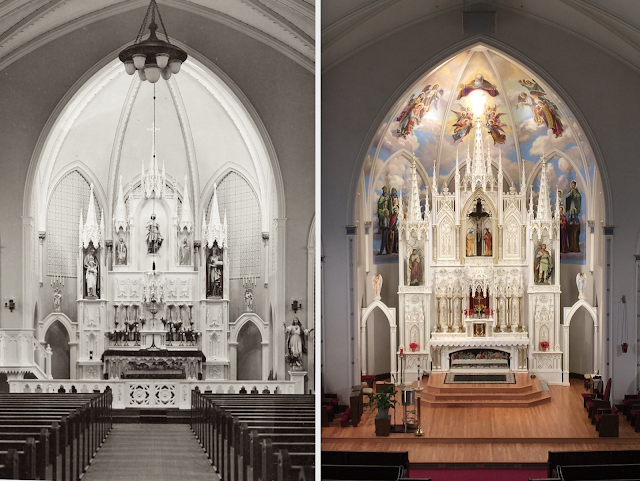 According to sources, the altar rail is also returning.  You will note the addition of figures painted on the ceiling panels and in the wall arches behind and to the side of the altar.  But do you also note what is missing?

The original church featured a raised pulpit (to the left) and the pulpit was left out of this restoration.  In its place is a rather nondescript lectern.  Some might call it an ambo but it is hardly more than a lectern.  It clearly looks out of place compared to everything else and it is certainly not what befits the ministry of the Word.  The raised pulpit may be out of fashion still in Roman church design but it would have been more faithful to restore the pulpit than to leave it out.

This was the complaint of the Reformation 500 years ago and it remains the typical complaint Lutherans have about Rome -- they continue to routinely neglect the preaching of the Word as an integral part of the Mass and this is shown here by a restoration that leaves out the pulpit.  I know that raised pulpits are not exactly the favorite of modern Lutheran restoration or liturgical design but in the first image you see the important place the Liturgy of the Word has within the fullness of the Mass while in the second photo you notice that the Word is more an afterthought to the design than something integral to it.

There are good Roman Catholic preachers and there is great Roman Catholic preaching.  But overall, this remains unfinished business dating from the time of the Reformation.  When will the Word be given its liturgical and architectural due?  I am not without the same complaint in Lutheran congregations in which the altar is minimized in size or stuck in a corner off center or treated as a glorified credence table.  We have the same problem with different execution.  The Divine Service or the Mass deserves to have the Word and the Sacrament prominently figure in the design.  It is a good restoration that might have been great.  Those who are contemplating this in their own parish should take note. . .

What really matters here? The construction of a pulpit, or whether the word is faithfully preached? How many times have preachers in impoverished communities around the world have had to stand on a dirt floor to deliver the Gospel message? We should never lose sight of the important things in life....everything else is just fluff or bluster.