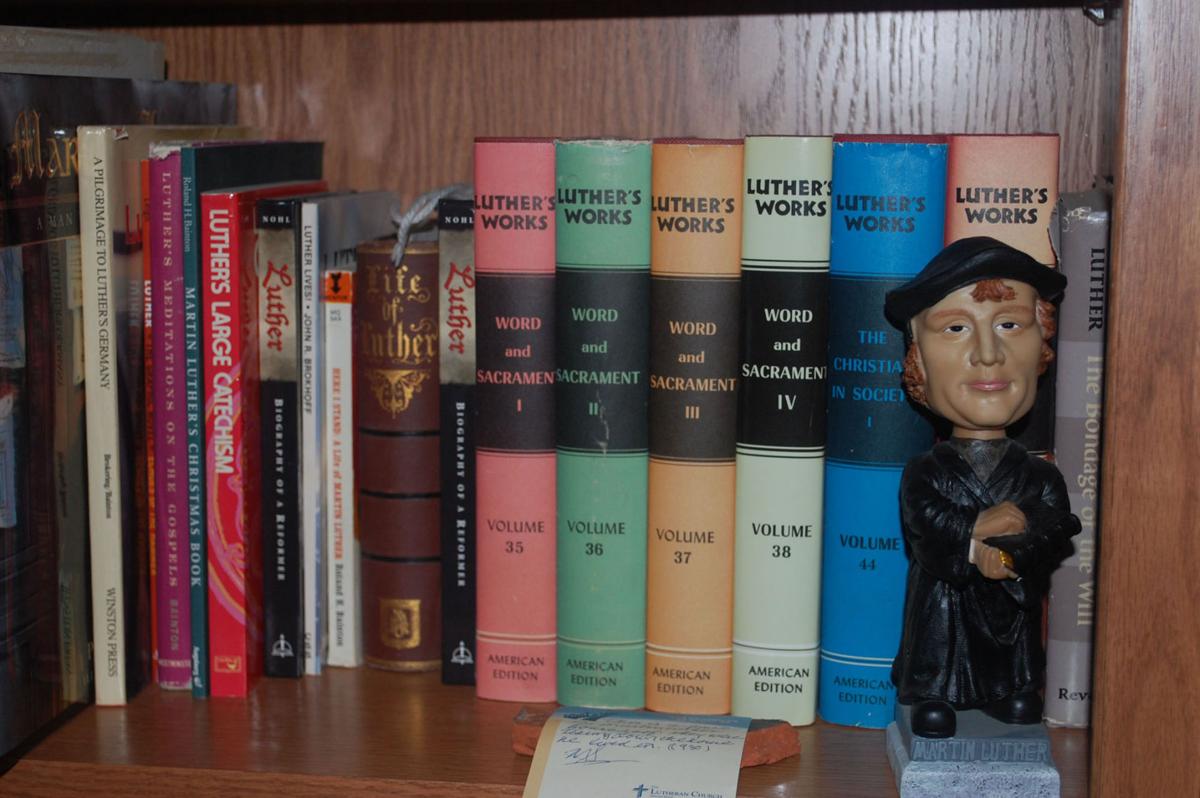 I was sitting around doing nothing much when I ventured to think a bit about Luther.  Sometimes I think I work hard and I do admit to not being much of a hobby person.  But I am a total slacker compared to Luther.  While working at his full-time job as university professor, he was also a husband and father, raising six children.  But he also had sort of another full-time gig.  At the beginning, Luther preached at least four times a week -- different sermons --  along with preparing a catechetical sermon every Sunday for his own children and others.  So every Sunday, Luther preached three formal and long (by today's standards) sermons -- on the Epistle, Gospel, and the Old Testament reading appointed for that day.  Then he preached at least once more during the week.  Oh, yeah, for some three years he also wrote a published theological work, about every other day.  Gee, I am a slacker!

Of course, we live in a different time.  Luther, as much as technology of that day aided his work, would have been even busier with a laptop, printer, internet, and social media.  Course, he probably would have been kicked off of social media pretty quick.  In any case, the manifold tools of today's technology make it possible for me to do a lot of work in less time than it took him and I still have not translated the Bible yet!  But the nature of the work has also changed.

As important as sermons are -- and they are VERY important -- people have other expectations of a pastor (right or wrong).  I preach at least once a week (even with an associate) and half the time I preach twice weekly.  And during the seasons of Advent and Lent, that can double.  That does not count the occasional sermons for funerals, etc...  Our people have come to expect sermons of substance and not brief ones either.  In the weekday Eucharist, sermons run 12 minutes or more and on Sundays 15-18 minutes.  In addition, my associate and I teach a couple of Bible studies a week.  Yet, our people, like most parishioners, expect a host of other things from their pastor(s).

I am not sure how well Luther might do with the other part of the typical work of pastors today.  Let us be honest.  Luther could speak like none of us can speak today (and still expect people to show up next Sunday).  Pastors have to be a bit more diplomatic in conveying the truths of God's Word, counseling God's people from that Word, and addressing them as a spiritual father in God's household.  It is not that Luther was without a heart -- he was a man of great compassion.  But Luther was not necessarily a man of great patience.  Like Luther we are called to be pastors of endurance but what we must endure is not quite the same.  Now, you can complain about this difference all the day long, or, you can simply accept the fact that times and people have changed.  But that does not mean we need to work less hard or that we can afford to be silent where the Word must be spoken.

As hard as it can be to write so many sermons and stay on top of Bible studies and do all the other stuff that pastors do, I think the hardest part of the job is trying to be blunt and still speak in love, trying to be honest and truthful with God's people without sounding like we are angry with them, and trying to listen when sometimes what you want to do is scream.  In short, a pastoral temperament cannot afford to be arrogant or condescending or judgmental or rude BUT the Word requires us also to be faithful, clear, and pointed in the application of God's Word to God's people.  I do not know about other pastors but this is what I sweat most of all -- speaking the truth in love to the people you fear are going to bolt and head into the arms of some church less than faithful.  But that is what a spiritual father does to the people in his household.

Pastors, we think we work hard -- and most of us do -- but let us never forget the hard work of listening to our people, discerning their needs, and addressing them as clearly and forthrightly as possible while speaking to them in love.  Of course this happens in sermons.  But it does not only happen in sermons.  Much of this happens in the regular pastoral care that occupies a good deal of our time and a great amount of our anxiety, angst, and energy.  Maybe I think too little of Luther.  Perhaps he would have done just fine in our day with a different landscape around him.  Maybe not.  Who really knows?  But as Luther worked hard for the people in his care in his day, I must also work hard for the people in my care in my day.  And so must every pastor.  But especially those who claim his legacy.

We can't really compare ourselves to Luther, Pastor Peters. He was not a parish priest, like you and me. His call to Wittenberg was to the theological professorship, and also as a member of the presbytery (i.e., the ordained clergy in that town). So he spent most of his vocational time on lecturing, research for those lectures, and writing various treatises. As a member of the Wittenberg clergy, he was asked at various times to preach from the pulpit, I think mostly at the parish church, when there was a temporary vacancy. I think the people also just wanted to hear from him from the pulpit, on occasion, because of his celebrity and involvement in public affairs. If he heard confession, led the liturgy or the hours, said Mass, or made pastoral care visits, it was a rare thing, because not part of his regular duties. Until his marriage, he also did not have the distractions of family to impact his productivity. His period in exile was a huge block of time that allowed him to make great progress on the translation of the New Testament. Other great writers and thinkers have used exile, furlough, or sabbatical to accomplish such projects (e.g., Dante)---- I do think however, that you have pointed to significant problems that arise because of our congregational polity. Since in the LCMS we pastors report to our congregations, many of them think that they can load us up with all sorts of duties, not realizing that in many situations it is just too much work to do any of it well. None of us pastors have the luxury of working only 9-5 M-F. Since layman have free time from 5-10 M-F and Sat and Sun, some of them expect their pastors to have that free time then too. The result is overworked pastors, poorly prepared sermons and Bible studies, and eventual burnout. Groups like DOXOLOGY and GRACE PLACE are addressing these problems, but I think the dynamics are typical for all congregationalist polities. ---- Pastors who serve under bishops do not have that problem--though they have OTHER problems, which I will not go into. That said, our synod-congregationalist polity has served us well. We just have to be aware of its weaknesses. Yours in Christ, Martin R. Noland