Some thoughts on youth. . .

For a long time now we have tried to entertain or distract our kids into the Church.  We put the emphasis on fun instead of holiness, on satisfying their whims instead of self-control, and in the appeal to their dreams rather than the plan of salvation realized in Jesus Christ.  And what has it bought us?  For all the money spent on fun and games, pizza and soda, and road trips to stadiums, the youth seem less connected to the Church than ever before.  This is not only about whether or not they like to go to Church but the growing distance between the faith and values they espouse and the faith and values of the Church and Scripture.  We have tried to reason them into the Kingdom as if logic could do what catechesis did not.  All of this has led them to be even more skeptical and suspicious of the Word of God, of catholic and evangelical doctrine and of faithful practice.  It has rendered the Church's most central teachings as subjects up for debate rather that truth to be met with the obedience of faith.

Worst of our sins has been to turn worship into a means but not an end, something that we define according to the dictates of our preferences and desires rather than the place where God not only makes Himself known but makes Himself and His mercy accessible.  The worship events we have planned for them seem to live on the edge of decorum and skirt the limits of good taste.  The worship and the sermon are designed to be spectacles that pump up the emotions but do little to teach the faith and bring our youth to repentance.  Good works are trivialized into token efforts that treat our neighbors as projects instead of people whom we love in Christ's name.  The end is not simply that these youth have turned on the Church but they have also turned on our most basic social and godly institutions -- like marriage and family.

We were so concerned about teen pregnancies that we failed to teach them how to love and the blessing of marriage and children.  It shows up in the young who have chosen to be sterilized and make permanent their choice not to have children -- not now and not at all.   We were so concerned about teaching them to say no to drugs that also failed to teach them how to respect and honor God's gift of life and the choice to be happy and content within the realm of His perfect love that has redeemed us.  We were so concerned with giving them self-esteem that we told them the lie that they were good and wonderful just as they are, that God loved them just as they are, and that their feelings and desires were the most important things of all instead of helping them find self-esteem in God's love and seeing them reborn by His grace to a new heart and mind in baptism.  We were so concerned with their earthly success that we valued good grades and a college education more than we prioritized their catechesis in the faith and being the good, holy, and righteous children of God their baptismal vocation promised.

Yes, we have made some headway.  Of late, we have established youth events more intimately connected to what happens on Sunday morning.  It is a good, wise, and salutary direction.  But it is a few generations too late.  We have already lost so many due to our lack of confidence in the means of grace.  Ultimately that is what this is all about.  Do we trust the Lord to do what He has promised?  Do we believe the Lord will give to us what He has said?  Do we rejoice in the Word and Sacraments that deliver Him and all His gifts to us?  That has been the problem not only for our youth ministry but also for nearly everything in the Church.  Where we have failed has been the failure of faith and with it being unfaithful to God's Word and promise. 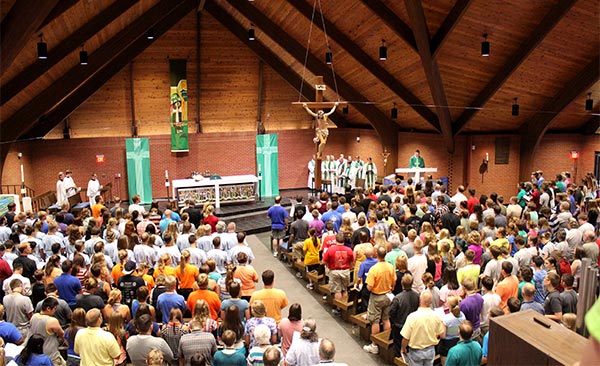