Blown in the wind... 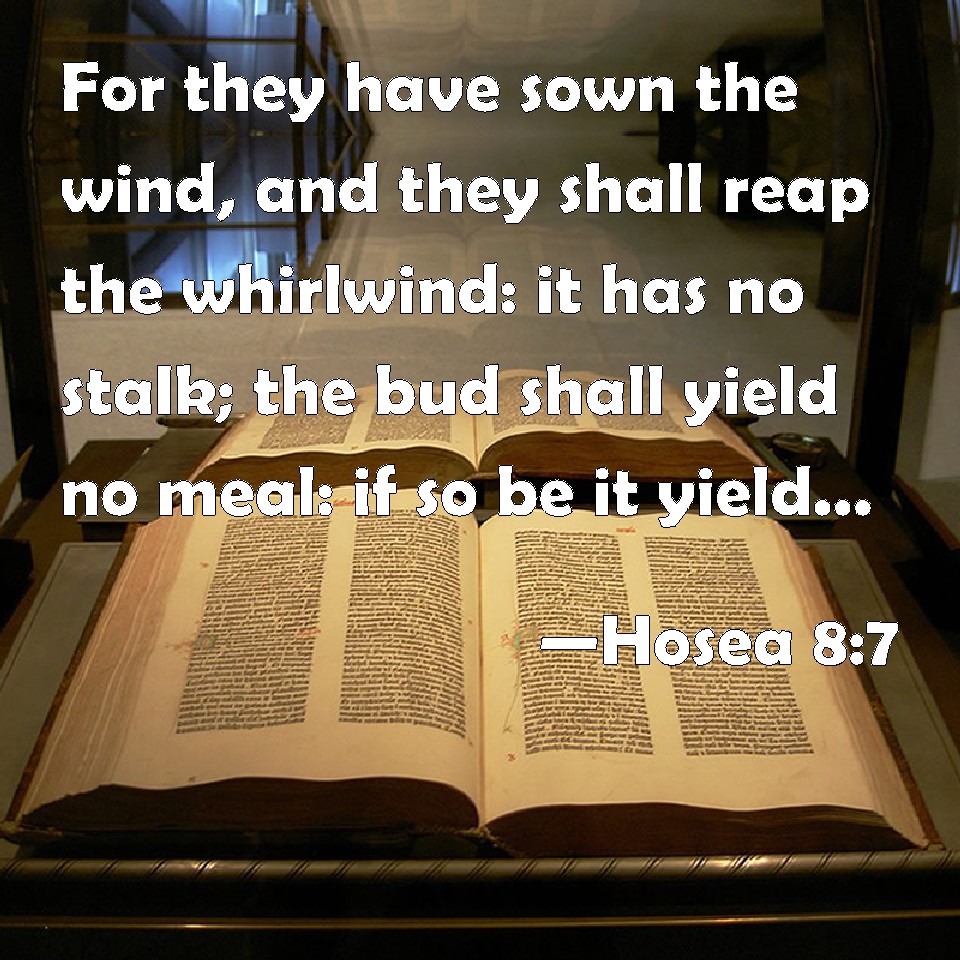 The prophet must have been looking forward to the present when he warned: “He who sows the wind will reap the whirlwind.”  Hosea could not have foreseen the future but God surely did and He has warned us of vanities that are empty and wind that sows only destruction.  But we did not believe Him.

As I find myself nearer the end than the beginning or even the middle of my stewardship of this holy office, the amount of wind that regularly blows is more than I ever could have imagined.  The whirlwinds created by such blowhards and their blows is more than I could have ever envisioned.  And with it the errors that pass as correct, the wrongs that parade as right, and the evil that is regularly called good all combine to create a real uncertainty about the future.

While I have every confidence that God is God and we are not (and this is a good thing), I also have every confidence that we have not yet seen the worst that man can invent or distort or abuse.  Every gift we seem adept to turn into a burden, every blessing into a curse, and every grace into a new law.  We cannot decide what it is that makes a man a man or a woman a woman and so our children live in the ebb and flows of our confusion, left to sort for themselves answers to these questions.  We love the vague and fuzzy speak of the woke world in which words mean what we mean at the moment and change meaning at our whims.  We have decided that reason is a hindrance and have cast off all semblance of sense and we have rejected tradition and the counsel of our sainted elders as worthless drivel.

Is this new?  I think not.  The Christian has warned for a long time that history is not reaching an apex of accomplishment, achievement, erudition, and education but marks the decline of our nobility and our utility.  Those who had hoped that the Church would give birth to a better world, a kinder society, and a tight rein upon our unbridled passions had hoped in vain.  Yet our Lord and His disciples warned us two millenia ago of this.  We were warned not to trust in earthly rulers and kingdoms and to keep our distance from their false wisdom.  We were urged not to feel too comfortable with a culture clearly at war with Christ and given an urgent appeal to stand up and stand out no matter what place we called home.  But somehow we missed the memo.

Yet the answer is neither despair nor defeat.  God has promised that His Word shall endure to the end and with it those who love and live by that Word.  We are not some delusional culture warrior who thinks that we will win and save the world from its divinely appointed end nor are we some naive soul who believes that more time will fix the ills around us and in us.  We have seen the enemy and he is us. But before you let that sink in too far, we have also seen the victor whose crown will not be diminished or dimmed by the likes of this world and its stain of sin.  We have also seen the Savior and he is not us.  He is the Son of God living in the womb of the Virgin and living out the righteous life we could not -- until He offers that life up for us all on the cross.  Yes, things are bad but we have a mighty Savior who is bigger than our sin and more powerful than the threat of death.

Man is blowin' in the wind but Christ is not.  He is planted into the ground as a seed to bring forth our new and everlasting life and our lives as a new people created in Christ Jesus for the good works that glorify Him.  The woke will win their battles and the transgender armies will prevail here and there.  At the ballot box and sometimes in the public square our voice will not count or will be silenced by those who fear the clash of a stronger idea.  But God holds this mess in His hands.  He cherishes our broken and failed lives enough to die that we might live.  He is hidden in a world where everyone shouts out their own cause but He will create the silence in which no one dare speak and then our voices will proclaim Him.  This is our faith.  This is our God.  What will win?  Not some foolish optimism that things may and shall improve nor some doomsday surrender to the forces that seem too powerful to ignore.  No, in all these things we are more than conquerors through Christ our Lord.

Faith is hard.  But the alternative is harder.  Like blessed St. Peter of old, we do not know where to go.  Christ alone has the bread of life.  Like the hungry in a bread line, we come to receive the bread of heaven and the cup of salvation and to pray, that through these means of grace, we shall not be lost to sin or fear but remain steadfast and firmly planted on Christ alone.  In our weakened states, the Spirit speaks through our groans and sighs and connects us to life that is the Light of the World.

You have summed it up cleatly and unequivocally. Thank you.