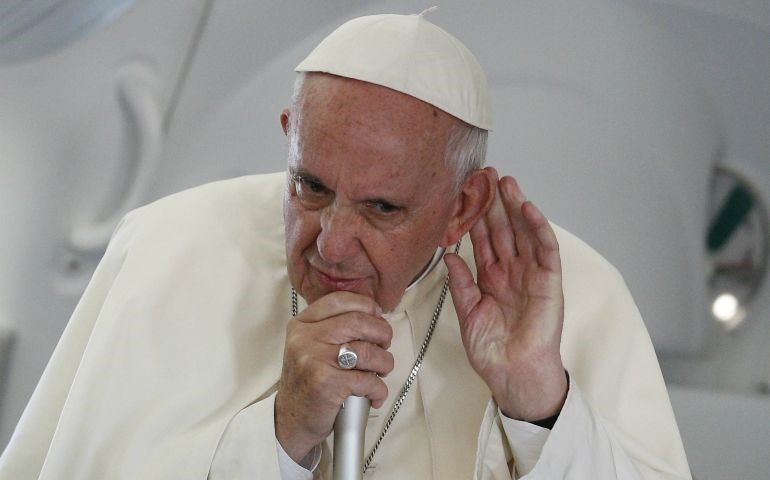 Apparently the Holy Father says that he wants the Church to be a listening Church.  Of course, he is speaking of Rome but he is not without his echos in the rest of Christendom.  He may just be playing catch up behind those who have listened so hard and so long that they have forgotten to be voices.  That is the terrible dilemma facing Christendom today -- do we listen or do we speak because you cannot do both at the same time.  Of course, we have to listen but that is the problem is to whom do we listen?  Pope Francis is not talking about listening to God.  Neither do the liberals and progressives on all other sides of Christendom talk about listening to God.  They are instead talking about listening to people -- to those inside the Church and those outside.  The focus of the ear has been turned from God above to the people around us and the only remaining voice of too many Christians is a faint echo of what those people are saying.

A few months ago we celebrated Pentecost, the birthday of the Church, as it has been called.  In the Collect and in the readings we prayed for what we heard -- for a spirit of boldness, for the truth the Spirit would make known, and for courage in the face of a world for whom Christ died but still unfriendly to His cause.  The holy boldness of apostolic voices was once the hallmark of the Church and her ministry.  Now we have become a timid Church and a hesitant people served by accommodating ministers.  The truth that was once honored by the blood of martyrs has become an embarrassment to us and we are ashamed of the God.  So we listen to the voices around us and have become deaf to the voice of God.

The Church of the early fathers was a Church born of and focused upon the Word of God.  The Church has claimed that allegiance ever since although with varying degrees of sincerity.  The Reformation was born of the voice of Scripture -- a living voice not of commands but of promise.  That is why we listen.  The voices around us complain and commiserate but the voice of God gives forgiveness to the sinner, hope to the despairing, and life to the dead.  The voices around us can speak with great detail and precision of the feelings that pass the moment and the desires that well up from within and the wants that cannot be constrained but in those voices is the only death.  It is the smiling death of a people sure they are getting what they want but still death.  The only purpose of the Church is to speak -- the prophetic voice of prophets who have learned from the Spirit to know the voice of their Shepherd and who have been emboldened by the Spirit to herald His voice among the people.

While there are some great preachers among the priests of Rome, Rome is hardly known as a preaching church.  The Reformation was a preaching movement but too many of her preachers have surrendered the pulpit for the couch and the Gospel for therapeutic deism.  We can listen all day and be the most listening Church of all but unless we are listening to the Word of God and proclaiming what it is that He has said, we are in the same darkness as the world.  God knows the hearts of men, the thoughts of men, and the works of men.  He does not need His agents to listen and tell Him what they have heard.  He needs His messengers to repeat what He has said and end the reign of darkness and the captivity of sin and the hopeless end of death.  It might be too late for Pope Francis but it is not too late for us to learn anew this ancient wisdom.