Couldn't have said it better and not even as good...

“Smells, BELLS, and Yells”…oh my 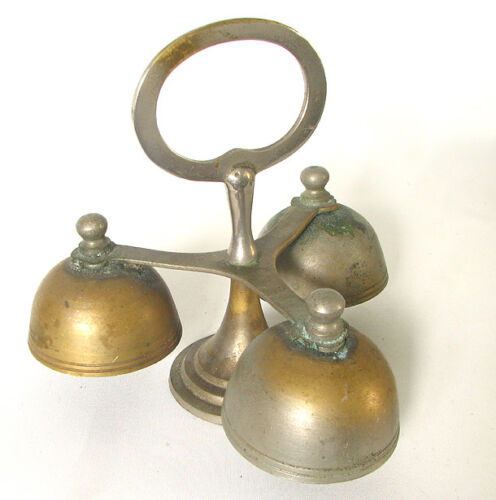 That’s usually the derogatory way of referring to a given pastor’s or parish’s appreciation for three specific church ceremonies: incense, the use of a sanctus or sacring bell, and chanting. On the second item in the list, it may indeed come as a surprise to many modern day Lutherans to learn that our spiritual forebears frequently retained the use of the sacring bell during the consecration, the chanting of the Words of Institution, in the Divine Service.

I am not exactly sure when the sacring bell began to be used, but it has biblical precedents. We might recall that in the Old Testament, the garment of the high priest had bells on it (cf. Ex. 28:33-35). It “tinkled” when he was performing his service. So when our great High Priest, Jesus Christ, comes among His own to serve them His body and His blood, it might have been almost instinctive for bells to be likewise sounded.

Luther said of this custom: "The priest's elevation of the sacrament together with the ringing of the bells, has no other purpose than to remind us of the words of Christ. It is as if the priest and the bell-ringer were saying to us all, 'Listen, you Christians, and see, and take and eat, take and drink, etc.’" AE 42:173,4. To the great Reformer, clearly, the bells chief function was to focus attention on the Words of Institution, (which words, recall, were recited sub voce in the Roman rite at the time). In the Lutheran service they are trumpeted forth and are to be pronounced laut und deutlich.

The south German, Musculus, relates his experience of the way the Saxons worshipped at the Mass he attended in Wittenberg during the meeting that produced the Wittenberg Concord in 1536: “The communion followed, which the minister began with the Lord’s Prayer sung in German. Then he sang the words of the supper, and these in German with his back turned toward the people, first those of the bread, which, when the words had been offered, he then elevated to the sounding of bells; likewise with the chalice, which he also elevated to the sounding of bells.” (Worship Wars in Early Lutheranism, p. 195).

Walter Zeeden, in his wonderful monograph Faith and Act: The Survival of Medieval Ceremonies in the Lutheran Reformation (1:100f.) specifically notes the continuation of the bells during the elevation (p. 33) among the ceremonies that Lutherans had a tendency to keep from earlier centuries in various places.

Still, one largely searches in vain for any specific mention of this ceremony’s survival in the Church Orders. Yet the very words of the Augustana about how we celebrate the Mass would lead one to expect it: “Nearly all the usual ceremonies also are preserved”(AC XXIV:2); a protestation repeated in Apology XXIV:1.

Given that, we shouldn’t be surprised by the long continuance of the custom, as witnessed by Christian Gerber in his Church Ceremonies of Saxony. Even though clearly no fan of the custom, he writes of it: “At the Consecration a small bell is rung somewhat loudly, first at the blessing of the bread, then at the blessing of the wine. This ringing has surely been retained from the Papacy. As to its purpose, that I don’t know.…” This was published in 1732, so you can see the bells persisted for quite some time in many places in Saxony, though their use as described by Luther had apparently been forgotten. (A translation of portions of Gerber’s work is available here in English: http://www.luthermem.org/wp-content/uploads/2015/07/history-of-church-ceremonies-in-saxony-bengtson.pdf)

Several modern “recreations” of Lutheran Masses include the bell at the consecration. You can hear it, for instance, in Paul McCreesh’s Bach Epiphany Mass, ringing out precisely as the words in German corresponding to “this is My body” and “My blood” are sung.

I assume, but cannot be sure, that Johann Gerhard has reference to the sacring bell when he wrote of ceremonies that, in his opinion, served little to no purpose for edification, mentioning specifically: “the priest’s lifting up the chasuble and ringing a bell under it” (see A Comprehensive Explanation of Holy Baptism and the Lord’s Supper, p. 477). However, I think the fact that he mentions it at all serves as a witness to the practice’s continuance in certain areas.

Dr. Piepkorn in his little monograph Conduct of the Service, notes: “It was anciently customary to ring the bell in the church tower a total of seven strokes, the first at the beginning of the consecration, three strokes at the consecration of the hosts, and three more at the consecration of the chalice. Later, with the multiplication of masses, hand bells were substituted. The widespread custom in the Church of the Augsburg Confession of ringing the church bell during the singing of the Our Father is a survival of this ancient custom, transferred to another element in the Service after the custom of a celebration of Holy Communion every Sunday and major Holy Day unhappily fell into desuetude.” (p. 28)

Thus, the use of bells during the consecration is a free ceremony that has Luther’s approbation, is evidenced in Lutheran practice throughout the age of Orthodoxy, and particularly in Saxony, which is the primary heritage of our Synod, and serves to invite the attention of the people to those most beautiful and important words: “My body…My blood…for you, for the remission of sins.” That Rome also rings bells during the consecration should deter us no more from this practice than from praying the Lord’s Prayer (after all, Roman Christians do that as well!).

Grant then, O God, Your will be done,
That, when the church bells are ringing,
Many in saving faith may come
Where Christ His message is bringing:
“I know My own; My own know Me.
You, not the world, My face shall see.
My peace I leave with you. Amen.”
Posted by Pastor Peters at 6:00 AM

I don’t think anyone gets that worked up over bells, except maybe handbell choirs which are kitschy in a uniquely 1980s Midwestern Lutheran way. The only issue with reintroducing bells at the consecration beyond the testimony of Gerhard that they, to no one’s surprise, serve no purpose for edification, which is after all the entire Lutheran approach to church ceremonies, is the statement by Luther that ceremonies should not be reintroduced in a congregation once they have been discarded. In practice, this means that if Luther’s retention of bell ringing for the sake of order and edification was reimagined evangelically as inviting the congregation to pay attention to the Word which had previously been spoken inaudibly, once the Word became spoken or chanted loudly as the Lutherans did, there was no need to ring a bell alongside it. If the original purpose of the bell was to signal the transubstantiation because the Verba was mumbled secretly, then any Lutheran would be hard pressed to explain much less champion its reintroduction, especially since the Saxons seemed to have no idea why they even did it.

Unless of course the motivation for reintroduction is less about Luther, whose elevation was discontinued by the Saxon Lutherans, and more about conformity with medieval catholic church ceremonies for purposes beyond order and edification. Which would be a good discussion to have.