I have never seen Lutherans kneel ever before! 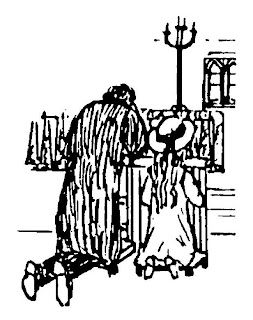 Kneeling, standing, and genuflecting -- does it matter?  Though the early Christians undoubtedly inherited from the Jews the prayer position of standing with arms outstretched, Constantine was known to kneel at his devotions and St. Augustine tells us: "They who pray do with the members of their body that which befits suppliants; they fix their knees, stretch forth their hands, or even prostrate themselves on the ground" (De curâ pro mortuis, v).

In the twentieth canon of the Council of Nicæa (A.D. 325) the fathers  decreed: Because there are some who kneel on the Lord's Day and in the days of Pentecost [the fifty days between Easter and Whit-Sunday]: that all things may be uniformly performed in every parish or diocese, it seems good to the Holy Synod that the prayers [tas euchas] be by all made to God, standing.  Apparently kneeling and genuflection had already found their way into the Divine Service.


In the West in the sixth century, St. Benedict enjoins upon his monks absent from choir to recite the Divine Office as a private prayer, not standing but kneeling throughout. So if not in public, in private kneeling was the standard posture of prayer and humility.  The practice of kneeling during the Consecration was introduced during the Middle Ages, and is in relation with the Elevation of the body and blood.

So what does it matter?  It matters not in the sense that a particular external posture determines whether or not we are heard by God when we pray.  But ceremonies, ritual, and church usages are not merely external.  C.S. Lewis makes the point in his Screwtape Letters (a book I heartily recommend) that we are not souls trapped in bodies. We are incarnate spirits. What I do with my body I do with my soul. And therein is the issue.  The very value of external postures is when they mirror the internal posture of the heart (faith).  No one would say we must (except those with canon law) but in our liberty we can and do use external postures to mirror what is (or at least is supposed to be) happening internally.

In this parish we offer the chance to kneel (that is, we have kneelers in the pews).  We may kneel for the confession and for the prayers.  Maybe we will offer more opportunities to kneel in the future.  We do not require it but it is available.  Much in the same way some cross themselves and some do not.  Some bow and some do not.  We do not despise those who do nor do we despise those who do not.  But at least let us not misunderstand or slander those who do.  In the end I think C. S. Lewis has got it right.  Worship is not just a matter of the spirit and true spirituality does not despise or disdain the material.  After all, our Lord has chosen common and ordinary earthly elements to serve as the means of His grace.  Surely bodily postures and gestures are fair means of communicating the faithful response of His people to what He, in His grace, has bestowed.

What do you think of the practice of holding one's arms outstretched in front of them ? Where can the origins of that posture be traced to? Do you think it has the same degree of legitimacy as genuflecting or kneeling during worship or prayer?

I think praying with both arms outstretched is a posture that has its origins in Judaism. I think St. Paul refers to it somewhere in his epistles as "raising holy hands in prayer." Its quite ancient, actually.

Didn't the Council of Nicea forbid kneeling on Sundays, because penitential prayer is not appropriate during a celebration of the Resurrection? Sorry, just couldn't resist bringing that up. :)

Great rubrical Judas. Maybe we should just print in the bulletin or show on the sanctuary screen:

Fortunately, the Lord looks at our
heart when we worship, not the
gymnastics of standing, kneeling,
and sitting. He warned the Pharisees
that their ritual might be correct,
but their hearts were far from God.

Quote: "Fortunately, the Lord looks at our heart when we worship, not the gymnastics of standing, kneeling, and sitting. He warned the Pharisees that their ritual might be correct, but their hearts were far from God."

So worship is merely cerebral or disembodied spirituality? It does not matter what you do, what you wear, where you are... be sincere and it's all good??? If God is so disinterested in externals, why does He demand such rigid conformity in the Old Testament? Tell me where does Jesus ever suggest that these externals were wrong or no longer count? He rightly challenged ONLY externals but never once suggested or said anything explicit about the worship of the heart being the only thing that matters. It is not a choice between but a both/and. Or why do we go to church at all. Can we not meditate upon the Word and pray in our hearts without ever setting foot in a church? Would God countenance this or did Hebrews have something to say about those who neglect the gathering together of God's people on the Lord's Day? This kind of talk befits a mainline Protestant denomination but not a Lutheran confession and practice.