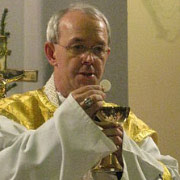 I found it interesting that Lutheran practice was mentioned by one Roman Bishop, Athanasius Schneider, Auxiliary of Astana in Kazakhstan, in support of communion in the hand.


Communion in the Hand Comes from the Calvinists

I wish it were more universally true among Lutherans and I hate to inform the good Bishop that his words may not be true on this side of the Atlantic...
Posted by Pastor Peters at 5:50 AM

When Communion in the hand was introduced into RC practice, I remember being taught that in fact there is lots of precedent in early church writings and art that this is how it was done, and that along with all the other changes to worship this change is actually a return of tradition to what it really is.

We were also taught it represents getting away from a passive idea of faith, and symbolises our participation in our own faith and the faith of the community, the distributor's action of presenting Communion with the communicant's action of receiving it.

Since being Lutheran I recognise this as a confusion of justification and sanctification, insinuating our works into his.

Yet, anywhere I have been in LCMS services, pretty much everyone receives in the post Vatican II RC mode, right along with the rest of the liturgy. Lutheranism 101 describes no other method of reception.

Well, here's a little historical perspective from the archives of our friends at EWTN.

Was it universal? The history of Communion in the hand is often
presented in certain quarters as follows: From the Last Supper on, Holy Communion was, as the norm, continually given in the hand. So it was during the age of the martyrs. And it continued to be so during that golden age of
the Fathers and of the liturgy after the peace of Constantine in 313 A.D.

And it continued to be the common practice until at least the tenth century.

Thus for over half of the life of the Church it was the norm.

An argument for the above is held to be found in a text of St. Cyril of Jerusalem's fifth Mystagogic Catechesis (21f), which he preached to neophytes in 348 A.D., in which he counsels the faithful to "place your left hand as the throne of your right one, which is to receive the King [in Holy
Communion]" (apudL'Osservatore Romano. English edition of June 14, 1973, p.6). This Father of the Church further counsels great care for any Fragments which might remain on one's hands.

Frankly, until the RC and other liturgical churches stop using the laity, i.e., "Extraordinary Ministers of the Eucharist" to distribute the whole issue is moot. If the laity are going to be permitted to distribute Holy Communion the people in the pews will find it quite acceptable to receive in the hand.

When I was growing up Lutheran we always received on the tongue.

It has been my understanding, (perhaps a false understanding) that reception in the hand as a general practice was discontinued to prevent those who recieved the host to pocket it and take it home, treating it superstitiously rather than recieving it as it was intended. Again, perhaps that is more lore than fact. Yet I am fascinated at how often dogma grows around and reinforces a practice that began for the simplest of reasons. And in this case, another practice with its own accretion of dogma (and emotional attachtments) is pitted against the other.

I am stubbornly old-new-fashioned... I prefer receiving the Supper upon the hand - even when I'm in Churches where that isn't the predominate custom. Why? The biggest reason is that I associate the hands with "touch" - and the Supper is Christ giving Himself to us in a way that all the Senses comprehend - we see, we smell, we hear, we taste... and we touch.

Of course, the big thing is that you take and eat. I can't get upset about taking in the hand as being too "Active" when if I had my druthers I would bring the Sacrament to everyone in their pew so they could remain receptive. I actually like the passive nature of the folks who can't walk well and who simply wait upon the Lord. Ah well...

It has been my understanding, (perhaps a false understanding) that reception in the hand as a general practice was discontinued to prevent those who recieved the host to pocket it and take it home, treating it superstitiously rather than recieving it as it was intended.

Yes, that was part of the reason but also that only the priest was permitted to touch the consecrated host by virtue of his ordination. My cradle Catholic husband had that firmly drilled into him by the Sisters who taught him. Of course, that only helps to perpetuate a priestly caste in the Church of Rome.

I really don't have all that much of a problem about receiving in the hand. I agree with Pastor Brown, "take and eat" are what matters. Whether we receive on the tongue or in the hand, it is the graciousness of Jesus who comes to us, not our worthiness, that is the "chief thing."

That is true -- when I was an altar boy, if the host fell off the tongue and the altar boy missed catching it with the paten, only the priest could pick it up, and only with those of his fingers that were consecrated.

However, I don't think the mistaken piety for "take and drop" is the thing here. Communion on the tongue remained the practice even after the understanding of the mass was corrected and mass itself reformed.

Nor are the ancient precedents, which are there, the thing here.

The reason behind the re-introduction of communion in the hand contradicts Scripture. The practice itself is indifferent.

The reason behind the re-introduction of communion in the hand contradicts Scripture. The practice itself is indifferent.

Yes, I understand that context.

It's also why for some Lutherans the more highly decorated a church is the more "catholic" it is when the original reason for using all those stained glass windows and statutes was to teach an illiterate population their faith.

Not that I have anything against them in our time, I think we can safely assume that most Christians can read. Proper catechization is the problem of our time.

Since the Word of God does not command which hand must put the host into the mouth, thus making the issue an adiaphoron, and in order not to yield to Romish sacerdotalism even in matters of adiaphora, a communicant may alternate at random times in taking the host either in the hand or having it placed on the tongue. Likewise, in using the common cup or the individual communion cup.

Well, that is an interesting point. We have differing opinions as to whether Lutherans should receive in the hand or on the tongue and yet we offer the Blood of Christ in the chalice and individual cups, which was also decidedly not a historic practice.

The extremely health conscious
communicant with receive the bread
on the tongue and the wine in an
individual cup.

The extremely brave and robust
communicant will receive the bread
in hand and the wine in chalice.

Anonymous, I realize that you are making a serious point but that really cracks me up :)

A lot of history here, and opinion formed from that history.

What about reverence? I grew up receiving and believing "the Calvinist way." You just passed a plate of crackers and trays of individual cups of grape juice.
You examined yourself to see if you were worthy (sigh).

All this is to say: Is is is? Is the host the body of our Lord? Is the cup His blood? Why do we kneel? Not that I fear dropping the host off my tongue, or spilling the chalice. I fear treating my Lord's body and blood with indifference or contempt.

It was my understanding that the RC instituted taking the host on the tongue because the communicants were taking it home and using it as a good luck talisman.

Anonymous, that is true but it is also a result of the growing gap between clergy and laity in the Roman church. Only the priest by virtue of his ordination was considered worthy to touch the host with his consecrated fingers.

For centuries there were three basic ways of being Christian, as an ordained cleric, a "religious" brother or sister or as a layperson. It was believed that the monastic estate was a much higher calling because it "separated" one from the world and gave the opportunity to live a truly "religious" life with the daily rounds of monastic prayer.

Well, as Luther found out so well, the world follows one right back into the monastery and even in Rome that teaching, although still formally on the books, is changing somewhat because the RC realizes with the priest shortage lay people are going to be doing a lot more church work, with the exception of offering the mass.

It is precisely because of that division of Christians into "classes" that the average lay Christian began to develop a sense of unworthiness in receiving and subsequently the Roman church had to enact the "Easter duty" whereby the lay Christian had to receive Communion at least once a year. That is a form of exaggerated reverence that speaks more of a mistaken sense of piety that seeks to "become" worthy enough to receive, which we never are.

That bishop was wrong, communion in the hand did not come to us from the Calvinists because Calvinisim has a different theology of Holy Communion than Lutherans.

"That bishop was wrong, communion in the hand did not come to us from the Calvinists because Calvinisim has a different theology of Holy Communion than Lutherans."

I don't know if the Bishop is right or wrong but I do know that Lutherans have borrowed a ton of things from Calvinists and others who have a different theology than Lutherans do. Your sentence does not make any sense.