Where does the authority lie? In Scripture or in one part of Scripture? 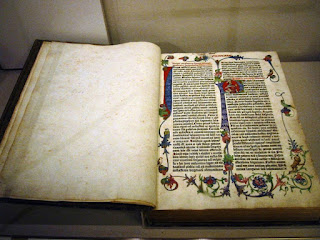 In contrast to this, the catholic faith maintains that Scripture is the voice of God.  The voice of God speaks two distinct words.  The genius of the Lutheran Reformation is to distinguish between these two words. The voice of the Law lays upon us the requirements under which we were created and which our first parents broke with, thus incurring the wrath of God and the imposition of death, decay, and disorder upon us and all of God's creation.  The voice of the Gospel also speaks of what the conscience does not and cannot know and what cannot be observed from nature -- that God determined to save His fallen creation from their sin and restore them to life from the domain of death.  This Gospel word is ours only be revelation and not by observation or reason.  This is the work of the Spirit.  In many and various way God spoke to His people of old but now He has spoken through His Son.  He did this through the Word made flesh, His Son, who as the innocent took on the burden of our guilt, paying its penalty with the currency of His own blood, and bestowing upon us unworthy sinners forgiveness, life, and salvation.  The Law speaks to protect us and order our lives in safety, to prepare the heart of the sinner for the Gospel, and finally to guide the redeemed to that which is good and right and true for life in Christ.  Thus both words work in concert for us and for our salvation.

The point is that we remain locked in the same dispute that was once part and parcel of the conflict in Missouri.  There are those who would say that the first and second readings are only the Word of the Lord in an incomplete way.  However guided by the Spirit, they remain a mix of our words to God and some of His Word to us.  The Gospel alone is the Word of the Lord without such equivocation.  As one writer put it, "much of the Bible could be described as (very helpful) words about God rather than 'the Word of the Lord.'" (Ralph Klein)

This remains the great divide among Lutherans.  When we say "the Word of the Lord" are we declaring and affirming that Scripture is the voice of God (both Law and Gospel) OR do we mean that only such words contain words from God intermixed with human words that lack such divine authority?  The latter has been the justification for many church wide decisions (I am thinking in the ELCA) to depart from what Scripture says in favor of a conclusion that fits with the principle of the Gospel (most clearly meaning freedom and that which is new, no longer bound to Biblical order, tradition, or the catholic principle).

Fortunately the minutiae of this is often lost because of the liturgical tradition in which we respond instinctively "Thanks be to God" to "the Word of the Lord."  In this way the liturgy may help to slow the decay but it surely cannot keep it from doing its destructive work.  Within the ELCA people continue to hear on Sunday, "the Word of the Lord" even though the actions of the church wide assemblies and the leadership at Higgins Road mean "well, not exactly."  In fact, there are those voices in the ELCA that have concluded that at times positions taken by the Biblical writers are just plain wrong or unhelpful or irrelevant to the contemporary issue or situation.

Those who hold to the Gospel as that which gives authority to Scripture complain that the alternative is fundamentalism.  They lament the "easy answers" that Scripture seems to give to complex questions and insist that the word of Scripture must not be allowed to trump the word of the Gospel.  In the end such leads us not to clarity but ambivalence, not to objective truth but relative truths, not to confidence but a puzzle.  They insist that the only place where the Bible is clear is the Gospel -- that which is necessary for Christian faith and life is clear -- and the rest of it relative and maybe even obscure.  What was part of the debate in the 1970s continues to frame the differences between Lutherans in America today.  Some things never change...
Posted by Pastor Peters at 6:03 AM

If Lutherans are always tempted to find a "canon within the canon" and exalt one part of Scripture in order that they may devalue other parts, I fear that the Reformers themselves may be at least partly to blame. And that for two reasons: first, with the notion of sedes doctrinae, that there are special passages of Scripture which teach key doctrines, by which the rest of Scripture must be interpreted; and second, with the notion of antilegomena and homolegomena in the New Testament, which introduces an idea of levels of authority and levels of reliability among the books of the canon.

The problem with both of these is that they say that some passages of Scripture are more Scriptural than others, and beg the question of how those really Scriptural passages may be identified. It then becomes fairly easy to transform the Christian faith into what one wants simply by moving books between the antilegomena and homolegomena categories and coming up with a new and different list of sedes doctrinae by which the rest of Scripture is to be interpreted (or, often, simply devalued).

Better, I think, to venerate all of Scripture as God's Word written, and reject any attempt to sort Scripture into levels of authority.

Levels of authority is not the question. Scripture has always been seen as having levels of authority even before there was Christian Scripture. The Law/Prophets/Writings are all Scripture, but the Law stand first in authority. That is why the readings have two selections, one from the Law, followed by another related one from the Prophets or Writings. Christian lectionaries followed that pattern too until recently -- the Gospel, followed by an "Epistle" from the other books of the Bible, usually an Epistle.

The problem is, that another authority is placed over all of Scripture, which is, "the Gospel". And "the Gospel" is a supposed pure authority not directly in Scripture but found in varying degrees in it. What in fact happens is that "the Gospel" is whatever this or that school of thought has determined it is, all the better if it is claimed to be the essential kerygma.

Thus do we have a quia and quatenus subscription to the Bible itelf, not just the Book of Concord.

It is no accident that this type of thinking re Scripture was at the same time as liturgy was being revised and expanded from its traditional forms too. As I was taught, it's all about the ongoing experience of the People of God, and what is important is to be part of that and changed by it, not to get all hung up on the expressions of any one point of that experience, either Scripturallly or liturgically.

Once you start viewing the Scriptures as just a container for the Gospel, the Scriptures are devalued. I mean, sure, I like my milk in a nice cardboard, but it's still mix if it's in one of those plastic things. And if I pour my milk into a glass, well, shoot, I can throw out the Plastic thing... it's old and outdated anyway, and I don't need it anymore.

The position of the LCMS:
Scripture IS the Word of God

The position of the ELCA:
Scripture CONTAINS the Word of God

The LCMS treats all of Scripture
as the inspired Word of God.

The ELCA picks and chooses what
it wants to believe and has wiggle
room to disregard what it wants.

Lay person here. I think of all of it as infallible and inerrant and each chapter, verse and book is likewise. Obviously, some verses are so short and contextualized that they don't have much meaning by themselves, but they are still all part of the record and cannot be disregarded, changed, etc. I think it is all or nothing. It is like court testimony where you have to tell the truth, the whole truth and nothing but the truth.