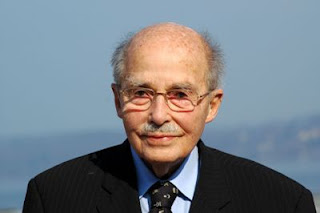 George Weigel, Distinguished Senior Fellow of the Ethics and Public Policy Center in Washington, D.C., is a gifted writer and thoughtful commentator on matters of religion and society.  He wrote these words part of a tribute to Otto von Habsburg, the last of his kind and a most notable personality.... I found them so interesting and pass them on to you here.  I knew little of him aside from a line or two in history textbooks.  Clearly there was even more to this man than his elaborate name and title....

One of the great bits of repartee in The King’s Speech comes as the maverick Australian speech therapist, Lionel Logue, is just getting to know His Royal Highness Prince Albert, the stammering Duke of York:


Logue: “Surely a prince’s brain knows what his mouth’s doing?” Bertie: “You’re obviously not well acquainted with many royal princes.”

No one could have imagined any such dialogue involving Archduke Otto von Habsburg, who died on July 4—not because the archduke was a fearsome personality, but because he was a pre-eminently intelligent and decent man.

The full name he was given at his baptism in 1912—Franz Josef Otto Robert Maria Anton Karl Max Heinrich Sixtus Xavier Felix Renatus Ludwig Gaetan Pius Ignatius—speaks volumes about the history of his family, whose rule over central Europe extended back some seven centuries. Otto might have been thought an anachronism after his father, Emperor Karl, was driven from the throne of the Dual Monarchy of Austria-Hungary in the waning days of World War I. Yet the son declined to disappear from the scene and played roles both dramatic and useful over the eight decades of his maturity.

He worried Hitler, who saw him as a potential threat to the Anschluss uniting Austria with Germany. So the Nazi Führer twice tried to meet the young Austrian nobleman when Archduke Otto was studying in Berlin in 1931-32. Otto von Habsburg not only rebuffed Hitler on both occasions, thus putting himself firmly on the Gestapo’s list of enemies; in 1938, as the Nazi vice was closing on an independent Austria, the archduke, at obvious risk to his life, volunteered to return to Austria as the head of government, to provide a national rallying point against Nazi paganism.

In June 1940, the Luftwaffe bombed the Belgian castle in which Otto von Habsburg and his family were living, just hours after the family had fled south ahead of the Wehrmacht’s drive west. Hounded by the Gestapo in neutral Lisbon, Archduke Otto and his family came to the United States at the invitation of President Franklin Roosevelt and spent the Second World War years in America. Otto von Habsburg returned to Europe after the Nazi defeat, married Princess Regina of Sachsen-Meiningen, who was working as a nurse at a Munich refuge camp the archduke visited (and whose father, Duke George III, had died in the Soviet Gulag); the couple had seven children, and lived a model Christian family life.

Elected to the European parliament in 1979, Otto von Habsburg spent 20 years as perhaps that body’s most respected member: an adroit debater in seven languages, he kept alive the vision of a post-Cold War Europe reunited as a single civilizational enterprise, built on the sturdy foundations of biblical religion, faith in reason, and commitment to the rule of law. In that sense, Otto von Habsburg was arguably the first modern “European.”

He may also have been the last. For the European Union, as it has evolved in the early 21st century, has been built around a naked public square in which biblical religion plays no role; faith in reason is faltering under the assault of post-modernism and political correctness; and the rule of law is jeopardized by what another great son of Mitteleuropa, Joseph Ratzinger, has called the “dictatorship of relativism.” In 2006, I spent a memorable evening discussing this unhappy situation with the Archduke Otto, at an Acton Institute dinner in Rome at which we were seated across the table from one another. He was not bitter, for he was a man of deep Catholic faith, and thus a man of hope. But he was concerned about Europe’s future, and his concerns have turned out to be entirely prescient.

I was also struck by the ancient rite used at his funeral -- one which accented the fragility of mortal flesh and the righteousness of God our judge.

A traditional ceremony during the funeral is when the procession of mourners arrives at the gates of the Capuchin Church, under which the Imperial Crypt lies, and the Herald knocks on the door. A Capuchin then asks “who demands entry?” The Herald responds with the name and title of the deceased. The Capuchin then responds “we don’t know him/her.” The same procedure is repeated once. Only on the third attempt, when the Herald responds with “a sinful, mortal human being”, the gates are opened and the dead Habsburg admitted into the Crypt.

HT to George Weigel at First Things and to Father Z at WDTPRS....

Posted by Pastor Peters at 6:04 AM

Ah yes, George Weigel and former Lutheran Father John Zuhlsdorf of "What Does The Prayer Really Say?" Takes me right back to my Roman days.

Before we get too romantic about Otto von Habsburg's connection to Europe's past, a little more history:

"Previously, the Holy Roman Emperor even had the power to veto a papal election and this power was reserved as late as 1904. In fact, Pope St Pius X only became pope because Emperor Franz Joseph of Austria (1848–1916) vetoed the papal election of Cardinal Mariano Rampolla to the throne of St Peter. So the votes turned to Cardinal Sarto...he who became the great Pope Pius X.

Yesterday, the Catholic Church buried the legitimate heir of the Holy Roman Empire.

Crown Prince Otto von Habsburg, may he rest in peace, is not only the son of an Empire, he is the son of a Blessed of the Catholic Church. His death marks the end of 1,200 year era in Christendom. In fact, his death solemnly signifies the official death of medieval Christendom. He is the first legitimate heir of Charlemagne's Catholic throne - but the throne has remained empty from 1922 till today."

Now, as a German I have a keen connection to the histories of Austria and Germany. Considering that much of European "Christendom" came about by the power of the sword – for example, the pagan Saxon Widukind was given the choice by the great Charlemagne (for whom I also have deep admiration as a man of many attributes) of accepting baptism along with his people or else, off with their heads – is "Christendom" really what Jesus had in mind when he said "My kingdom is not of this world?"

I, too, mourn the passing of Otto von Habsburg as a man of excellence in many areas and consider the European Union to be far from admirable. But Christendom? Perhaps God has other things in mind. I think the late Dietrich Bonhoeffer understood that as his own life was sacrificed in the struggle against Hitler.

But Pastor Peters did not say anything but he found this passage of an era "interesting" and left the post to stand without comment.

Just by the length of his name one can surmise that there is far more to the man and his connection to European history than meets the eye.

Which Americans are not always aware of (and I am decidedly NOT applying that to Pastor Peters), history being a rather weak subject these days. Lutherans have a stake in this history as well. It's the difference between the Theology of Glory and the Theology of the Cross.