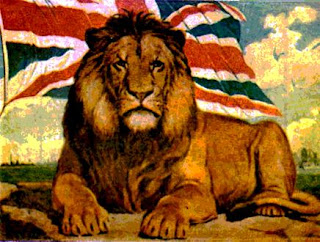 John Stephenson has touched me with a heart felt post on England and a call to pray for the nation, culture, and people whose history has been so intertwined with our own.  As something of an Anglophile, I warm up to the rich images of England, to the classical sound of the BBC and Choral Evensong, and to the rich tradition of (at least the higher end) of Anglicanism.  But there are words of warning about the future of an England in which Christianity and its history are being excised from the culture and soul of this grand nation.  It makes me sad to think of where this will end up.

These are just a few of the stunning facts that give sobering pause to the real state of England today.  Behind the wonderful and pastoral images of the countryside, behind the rich tradition of cathedral and country parish, behind the monarchy and its history, lurks a secular nation casting off every vestige of its Christian past.  Whose agenda is at work?  Who will be left to say "enough already."  To whom will this secularism be exported?  How far behind are we?  What we see in England is a preview of what is happening among us.  Let us pray for England, indeed, for all those determined to treat Christianity as a disease to be cured!

PS... After posting this I read about the police in the UK forcing a man to take down a Bible display in his own cafe... read it here.
Posted by Pastor Peters at 6:03 AM

It is quite ironic that the biggest defender of English culture and the Church is an immigrant, The Ugandan born and raised Archbishop of York John Sentamu.

The average church attendance in
England for the past decade has been
between 4%-7% of their population.

This is a good indication that the
secular view point of life now
dominates their culture. If on
average only 5 per cent of a nation
worships the triune God on Sunday,
then they have a spiritual crisis.

In the words of Mark Steyn: "In cutting off two generations of students from their cultural inheritance, the British state has engaged in what we will one day come to see as a form of child abuse, one that puts a huge question mark over the future. Why be surprised that legions of British Muslims sign up for the Taliban? These are young men who went to school in Luton and West Bromwich and learned nothing of their country of nominal citizenship other than that it’s responsible for racism, imperialism, colonialism, and all the other bad -isms of the world. If that’s all you knew of Britain, why would you feel any allegiance to Queen and country? And what if you don’t have Islam to turn to? The transformation of the British people is, in its own malign way, a remarkable achievement. Raised in schools that teach them nothing, they nevertheless pick up the gist of the matter, which is that their society is a racket founded on various historical injustices. The virtues Hayek admired? Ha! Strictly for suckers."

One of my favorite paintings is The Secret of England's Greatness by Thomas Jones Barker. It depictsQueen Victoria giving the Bible to an African chief. He had marveled at all he saw in England and wondered how they built such a great place. Her response reminds me of Psalm 127.