What's up with those Mormons? 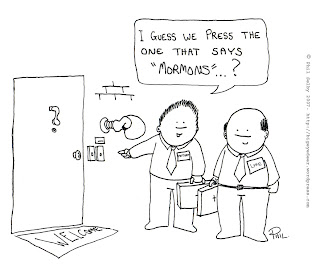 It seems the Mormons (Church of Jesus Christ of Latter Day Saints) wants us to believe that they are nothing special... What's up with that?  Read from USA Today:

The "I'm a Mormon" campaign — mostly TV spots and billboards — will encourage people to learn about Latter-day Saints by visiting the mormon.org website, which features video profiles of thousands of Mormons from around the world.


"These are real people," said Cindy Packard, the LDS Church spokeswoman for the metropolitan Phoenix area. "There are no scripts, no fake stories, no wardrobe, just real people talking about their lives." Visitors to the website can also chat live with representatives who can answer questions about the Mormon faith and check out a list of common questions about church doctrine, such as "Are Mormons Christians?" "Why don't Mormons drink coffee, tea or alcohol?" and "What do Mormons believe about the Bible?"

The rehab of the Mormon brand has been going on for some time.  Why, even Pat Robertson believes that Mormons make outstanding Christians.

In an interview published Saturday to mark 50 years of Christian Broadcasting Network, Chairman Pat Robertson said he liked Mitt Romney’s politics and saw the Mormon presidential candidate as an “outstanding Christian.” Although many evangelicals are skeptical of the Mormon faith’s claim to Christianity, Robertson called former Massachusetts Governor Romney an “outstanding Christian” in an interview with The Associated Press. But when asked if he was alright with a member of The Church of Jesus Christ of Latter-day Saints in the White House, the 81-year-old head of the television network refused to answer.

So the politics is making headway in this effort to make Mormons mainstream Christians.  Whether or not you are for Romney or Huntsman, their Mormonism has brought this publicity shy group to the forefront of the news.  I recall reading a survey of the stranger of Mormon beliefs and questions asking if you would vote for someone who believed in wearing special underwear or that humans came from alien life forms, etc.  Apart from these sensationalist things to ridicule and the monologues of late night TV hosts, there is a real question about Mormonism and its attempt to become part of the fabric of mainstream Christianity.  I am not sure how successful the candidates will be, but I for one have some pretty severe misgivings about the tendency to call Mormons Christian or the place them under the umbrella of Christian churches.  I suppose I will be called "Mormophobic" by some but it seems to me that this is a kind of bait and switch tactic -- sure we are Mormons, we are your neighbors, and we are Christians just like you.... until you dig a little deeper anyway. (BTW didn't we LCMSers try that tactic with a national ad campaign some years ago?!?)

What do you think about this movement to make Mormons mainstream?

Clearly, 21st Century Mormons want to appear to be mainstream Christians, and their latest web & media campaign is working hard at addressing this. But their documented teachings say otherwise. What makes it difficult to discern Mormon teaching from Christian teaching is that they use common Christian terms but with often very different meanings and contexts. (Good stuff on this at Mormon Research Ministry) The challenging question though is: If we choose not to call Mormons "Christians" because of their emphasis on meritorious righteousness, what do we call the currently popular varieties of Christianity that teach something other than "by grace alone"?

This does all sound a bit familiar, though I think the LCMS's ad campaign was to introduce the viewing audience to their neighbors, the Lutherans because no one really knew who we were. The LDS church is on the other hand attempting to separate themselves from the rather infamous past of Joseph Smith and Brigham Young, from their reputation of illigal and dubious practices such as polygamy and obsession with geneologies; the secret rituals and perhaps even the saccarine facade of Donny and Marie. My wife was raised as a Mormon and she never fails to wince whenever she sees these ads, for all they really are is painting a nice face on the devil's lies.

Every time I see a Mormon commercial, I am impressed. Yes, I know of the problems with their theology. But, their commercials are extremely effective on an emotional level. This is a concern. Do Christians know how to battle this type of doctine?

It Seems the Mormons are special ... Yes!
They have a great faith, love and charity to others! I have Mormons friends and neighbors, and I love them!