40% of Americans Have 1 Child or Less 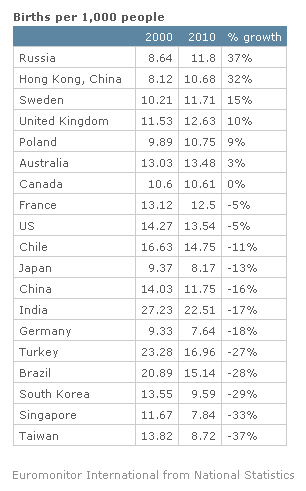 We have oft opined about the lack of children in modern families and, specifically, in Lutheran households.  Now some numbers to back up the dramatic shift. You can read the whole article here.

The latest numbers suggest that an amazingly high percentage of women today—18.8 percent—complete their childbearing years having had no children. Another 18.5 percent of women finish having had only one child. Together, that’s nearly 40 percent of Americans who go their entire lives having either one child or no children at all.

And it's a big change in behavior from the recent past. There have always been people who lived without having children—either by happenstance or by choice. But for all of American history, the numbers of this cohort were fairly small. In 1970, for instance, just about 8 percent of women completed their childbearing years with no children. (And only about 11 percent of women finished with only one child.) Over the next 40 years, those numbers rose almost without interruption. (The numbers ticked backward only once, in 2002.) This dramatic increase in childlessness—the number more than doubled—took place in just two generations and came at a time when medical advances were drastically improving the odds of infertile couples conceiving.

The point of this is that the choices made by folks who decide NOT to have children dramatically alters the expectations and choices of the children who are born.  The article relates that in Germany (further along in this trend than America) fully one of every four males believes that being childless is always the preferential option.

The aging of populations is related to the fact that people live longer, to be sure, but it is made even more profound by the growing lack of children within those populations.  We are at the cusp of seeing a huge number of boomers head from active full-time employment to retirement and the numbers of active workers whose taxes will enable the retirement and medicare checks to be cashed is in decline.  It is a political hot potato but the urgency of this problem grows daily.  I posted the unbalance of our clergy toward the pre-retirement years and we have long lamented the declining numbers of children in the church (as well as those outside the church).  It is an urgent problem for the Church as well as society in general.  It is not merely a statistical issue but the expectations of our children and youth are shaped both by the overt and subtle influences of those around them.  I find it even among catechism students.  Marriage and children are not the high priorities or life long goals once so commonly expressed by those on the verge of their teen age years.

I am not chicken little and I am not saying the sky is falling but merely pointing out that there are trends here of which we cannot afford to be ignorant...

BTW you want some more statistics to ruminate upon?  Try these:

Still, if all the people who are by psychological inclination averse to having children don't have any, who will be left?

Ah, those who like kids and want them despite social pressure aimed at reducing family size. Also, those who have only one partner in their entire life have the most children. So, there could be a robust rebound. We will have to wait and see (don't you just hate having to be wait?) and we will have to be faithful even though things are not as we like.