The Word was made FLESH... 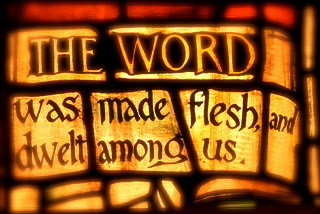 Drive through town and you find all sorts of signs telling to keep Christ in Christmas.  We have made it a quest to rescue Christmas from materialism.  All our bumper stickers and law oriented signs demand that Christ be kept in Christmas with all the moral outrage of a people who believe that Santa and presents have stolen the holiday from Jesus.  Perhaps they have. But it is not without its irony that while we are trying to keep the material from taking over Christmas, Christmas is about God's embrace of the material.  The Word became flesh.  There is nothing more material than that.
The Word became flesh.  Or, incarnation.  Before this God could never be seen in the material.  He might appear as something but did not take on any material form.  God is spirit, Scripture says.  In fact, it is not only that God is spirit, it is that flesh almost became equated with something evil or at least less noble than spirit.  Flesh became a piece of smelly stinky clothing that no one pure and clean would put on.  But God did.
Spiritual things have long dominated our ideas of religion.  We have often spoken of the body as if it were a prison holding the spirit in and the job of religion to set the captive spirit free.  Sadly, I even heard this from a pastor in the aftermath of the Sandy Hook shootings – talk of the slain children being set free to become stars and angels.  What consolation is there in that?  The consolation comes from God taking on flesh and all its weakness.
God created Christmas by embracing the material of our flesh and blood in order to save us.  The dust and minerals and water that make up this body became the temple of the most High God.  That is what Christmas is.  Far from God disdaining the material, He took on our material flesh and blood to become our Savior.  He became flesh to save our flesh from our fleshly sins.
The Word became flesh, that the flesh might become divine.  Let me say that differently, God descended to us wearing our human frame so that in Christ we might ascend to Him and be received into His divinity for eternity.
The problem with religion is that it is mostly our attempt to ascend to the heights of heaven to be with God, the tower of Babel approach.  But there was never and still is no chance that we can ever ascend to God.  We are rooted and planted in sin and its death.  We are captive to the chains of our mortality and unable to free ourselves.  If religion is to free us from the material so that our spirits can ascend to God, there is not a hope in hell for any of us.
But, if faith is in the God incarnate, the Son of the eternal Father who also became Mary's Son, then this salvation is not only possible, it is our true and blessed possession by faith.  God brought heaven low that we might be lifted up.  And this is still what happens in worship every Sunday morning.  We do not ascend to God, but God brings heaven low to us and we glimpse its glory in the forgiveness of our sins and we taste our future in the bread which is Christ's body and the wine that is His blood.
Repentance is not making us feel worse about ourselves.  Repentance is facing the truth.  We cannot ascend to God.  Our hope lies instead in the God who descends to us, who is incarnate in our flesh and blood, to live as one of us yet without sin, to die in our place the death of sin, and to rise to bring us with Him to heaven and the eternal place He has prepared for us.
The glory of God is in flesh and blood – that is the surprise of Christmas. That is also why the Sacrament of the Altar is so connected to Christmas.  As Christ became flesh for us, so now does He make Himself present in the material of bread and wine.  He comes to us and meets us where we are only to raise us up by His promise to the future we eat as foretaste right here, now.      Whether we read Christmas in the wonderful details of Luke's story as we did last night or whether we read Christmas in the poetic description of the Word made flesh as we read this morning from John, the message is the same.  God does not disdain the material but enters the material, takes on flesh and blood, to save us and that our mortality might be swallowed up in His divinity forevermore.  The Word became flesh and dwelt among us full of grace and truth... and through this incarnation, we are raised up to heaven and its glory, taken up into God's deity, to dwell there in Him forevermore.  Amen
Posted by Pastor Peters at 7:15 AM

The circumcision of the spirit; suggests that the letter was corrupted by its very nature; while not excusing man.

Excusing man after Calvary of course; provided that man arise above his base nature with the atonement of Christ.

I still recall Scaer's wonderful Christmas Chapel sermon in which he said "God drafts an unbelieving world to acknowledge the birth of His Son into the flesh."