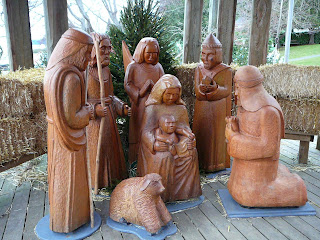 Terry Mattingly, always a thoughtful writer, has written of the decision of the Santa Monica city government to prohibit all private, unattended displays in the city park.  TMatt cannot figure out why this is such a big deal (repeating a past point): I, personally, have never understood why so many religious believers think it is so important to have a creche on the lawn of their local government’s secular headquarters.

Well, I do not think that the point is that such religious displays HAVE to be held.  What is significant is when they are prevented from being placed on public land.  The issue is not that we have to make way for such things but when clearly established tradition (in this case nearly 60 years) is overturned, Christians get touchy. Anyone would.  It is like being told you can do something for most of your adult life and then suddenly being told, "No, not now.  Not anymore."

I am not sure that the issue ever was that churches demand for the creche or cross or commandment tablets to be displayed.  I, for one, would think that to insist upon that right out of the blue would constitute a somewhat suspicious challenge to precedent.  However, when the precedent is allowing or approving and then suddenly to disallow such religious displays, that does constitute a narrowing of the religious rights once exercised and a denial of the tradition of the past.

As only one Christian, I can understand that the government may not want to grant such rights given the present climate and the judicial precedents there.  What I cannot understand is ending such long standing tradition or abridging the rights of Christians to do what they have always done.  That smacks of a whole nother thing (as a friend used to say).

Surely it would be better to grandfather in such long standing traditions and to make future practice more discrete.  Unless, of course, the desire is secretly to banish religion to the barren nether region of private feeling.

That said, I do surely agree with Terry that it is a mixed blessing when courts have decided that the creche or cross can remain because they carry no religious significance.  When that happens, it might be time for the churches to refuse to allow them to be used unless and until that religious significance is acknowledged and affirmed....

Just thinking... and you know how dangerous that can be!

I long felt a sense of loss as Christmas Carols left public schools and Christmas plays became holiday celebrations. As you noted, public displays are allowed in some places because they are considered to be of no significance. I wonder what the importance is in fighting for something, only to have it declared by some politician or judge to be insignificant.

What is sad, to me is that folks believe that we should, or are even able to add to the Word so as to make it appealing, somehow to the world, at large. Don't we make the Word less significant when we do anything to alter it in order to try to make a congregation appealing to the public?

We enter into a new church year, tomorrow. Let us pray that our congregations support our pastors in first and foremost tending the flocks to which they have been called, and properly preach The Word and rightly (ritely) administer The Sacraments.

Let's leave the government to its role.