Good words from an Orthodox homily.... 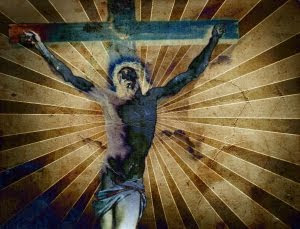 He who was eternally begotten of a Father without mother,
was begotten in time of a mother without father.
He whom the heavens cannot contain,
was held within the womb of a woman.
He who nourishes all creation,
was fed on milk.
He did not come because we were worthy,
but because we were dead, in trespasses and sin,
held by Satan in bondage to sin.
He did not come because we sought him, or wanted him;
he came because he is good and loves mankind,
because he saw his work falling into decay,
and willed to raise us to life,
to forgive our sins,
and restore his image and likeness in us.
He won us for himself, by active, patient love,
by taking our guilt and sin on himself,
and by pouring out his holy, divine life into death.
He rose from the dead, trampling down death by death,
and to those in the tombs bestowing life.
He ascended into heaven, that he might fill all things;
he poured out the promise of the Spirit from the Father
upon his waiting Church.
Now the Holy Spirit works in the Church, bringing us through the Son to the Father.
The Holy Spirit indwells us, and so we are God's holy Temple.
He births us in holy Baptism, he anoints us with holy Chrism, he makes the bread and wine to be Christ's own flesh and blood so that we might receive Christ,
and with Christ, forgiveness; and with Christ, eternal life.
Let us not forget how great a price was paid for us, beloved;
let us not forget to what end it was paid.
Christ did not suffer to make us happy, to give us our “best life now.”
He did not die to give us an excuse to wallow in sin and self.
He did not rise to give us this life, extended out forever.
He suffered to give meaning and purpose to our suffering;
He died so that we might die to sin;
He rose to give us his own divine, indestructible life.

It's through much suffering that we enter the Kingdom of God;
it's through dying to sin that we are free to serve others;
it's through sharing his own indestructible life that we truly know God.
HT to Fr. Gregory Hogg
Posted by Pastor Peters at 6:00 AM