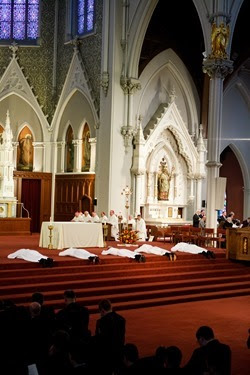 I cannot help but be moved in witnessing the ordination rite in a Roman Catholic diocese.  There is something striking to see those being ordained to the priesthood laying prostrate before the altar, in submission to Christ and His Church.  Oh, I am sure that someone will comment negatively about this or about the way I react to that symbolic posture.  Sure, we don't have to do it but we don't have to eat like we do or live in nice homes or drive nice cars or take up expensive hobbies, either...  So, if you will, grin and bear it.  My point here is not about Rome and not about the priesthood and, no, I am not planning a swim across the Tiber.  I just like the powerful symbolism of men whose posture of prostration befits the posture of the office they will bear.

Postures have meaning.  We stand when the flag goes by, we put our hands over our hearts for the national anthem or the pledge of allegiance.  We used to stand when a woman entered the room (I still think it only polite).  We do all sorts of things we do not have to do and we do them because of the symbolism.  That is not a bad thing.  In fact, it is not only not bad, it is a good thing.

Funny how it is that we could evolve from a Judaism in which postures, gestures, and ritual would be so common to a Lutheranism in which less is more.  Honestly, I think it has less to do with our dislike for things katholisch (which is no small matter) as it has to do with the fact that we don't like doing anything that is not convenient, comfortable, easy, and fits our whims.  We complain all the dang time about how often we stand up, sit down, kneel, stand up, sit down, kneel, stand up, sit down, and kneel -  all the while the stats say our lifestyle is too sedentary, we exercise too little, and we are too fat.

I sometimes lament how cerebral worship has become (I am not excluding emotion from that word though some do).  It is cerebral and feeling oriented as well as me centered.  Perhaps that is why I find the image of priests laying prostrate while being ordained a compelling visual symbol of the undying devotion to the Lord which should not be reserved for the ministers but should belong to all the baptized.  Maybe it is just me but sometimes I think we act as if the faith were mere window dressing on our lives and not the central identity of us as people.  We take things so casually -- except the things that relate to ME.

If I said to folks we were to kneel without cushioned kneelers, the complaints would not end.  If I suggested that we might lie prostrate before the Lord, folks would bolt the church as fast as possible.  Now, mind you, I am not saying we should, only lamenting that we all find it easier to express a piety which fits our likes and stays within our comfort zone.

As an example, we had a couple of baptisms and a confirmation one Sunday a while ago.  Two children from the same family and a youth whose parents were moving before the regularly scheduled day of confirmation... so, yes, it did add about 10 minutes on the length of the service.  Funny thing was that I had two different people comment that we said the Our Father twice that Sunday and we confessed two creeds -- a waste of time in their minds and not very efficient.  Once was deemed more than sufficient!  Ah, yes, we would not want to over exert ourselves... not even for Jesus.

Well, I have finished my rant and turned down the snark.  We can all breathe easier now.... but I still find the photo compelling.... as I think back to the Sunday 33 years ago to this very day when I was ordained...  Wow, I was barely 26 years old and now the anniversary is 33 years!  God must be patience and merciful to have accepted the service of one as flawed as me.  If you have a young Pastor or one new to the office of the ministry, say an extra prayer for him today... and for me, if you can spare the time...

Rejecting the significance of physical aspects of worship is essentially a Gnostic position. The first time I ever encountered an argument for the importance of physicality in worship was in A.W. Tozer who made the case very well but who has been ignored by his church.

Blessings on the anniversary of your ordination. And though few may listen, keep proclaiming the pure Word of God, just as you are doing. "Rise again, ye lion-hearted...."

David, was I making an argument for the importance of physicality in worship OR was I merely commenting on how visually striking the posture was? I do not believe I was advocating that we must or even should take it up for ourselves. I was, however, complaining about those who complain about posture in worship and who prefer simply to sit and ponder in solitude. I did not realize I was a Gnostic.

I didn't argue you were a gnostic unless you were actually rejecting the significance of physical aspects of worship (which is different from saying that we must ape that particular Roman practice). You don't seem to be doing that unless I'm missing something. I grew up in a tradition that did reject the idea that what we do with our bodies in worship was consequential (i.e. kneeling, etc.) but what mattered was what we felt in our hearts to the exclusion of what we were doing with our bodies.

I believe one of those new-made priests is barefoot, also. Additional symbolism.

Coming from Evangelicalism, which is much more Gnostic than they realize, I agree. Posture and symbolism do reflect our attitude. Why else do business people go to seminars on body language?

As for saying the Our Father or Creed twice in one day, that shows they do not remember the Catechism. I wasn't taught it, can't repeat it from memory (yet), but I do seem to remember Luther suggesting we start and end each day with the Our Father, and the same creed.

The evangelical dislike (dare I say hatred) for "vain repetitions" (they are the Lord's own words, for Pete's sake!), and "empty symbolism" (what do they think their Lord's Supper is?) only shows how much we really hate and fear our God.

There is a perverse, sinful heart in each one of us. We will struggle till our death or the Lord's Return. If we don't love perfectly, what do we call it? It ain't apathy; I'm not sure that word is in God's vocabulary.

And you didn't even cover the other swing of the pendulum, Fr. Peters. What of those (us) who may do these symbolic gestures and postures for the wrong reasons?

"Preach the Gospel at all times, use words if necessary!"

Religion is not aspiration, it is not temperament, it is not subjectivity, its roots are in God moving to man more than man moving to God. Peter Trylor Forsyth

David - reread your post. Sorry I must have been reading in German to have misconstrued what you wrote.