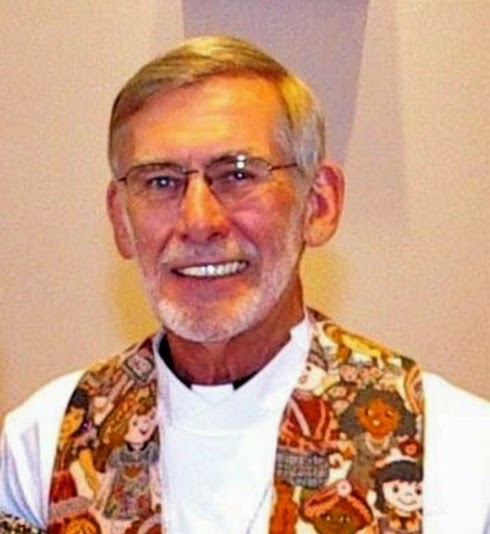 In 1978 I was awaiting the second most important news of my career -- where I would serve my vicarage (3rd year internship from seminary for all you who don't know the lingo).  As I watched the procession of District Presidents into Kramer Chapel, I watched in horror at the sight of gaudy sport jackets, wild ties, and leisure suits. . . and then one guy in a three piece gray suit with a full clerical collar.  He had a beard and long hair and I knew nothing of him (he was a very new District President) but prayed he would be the bishop of the district where I would serve.  In an odd turn of fate, he was.  His first words to me announced that my supervisor (loosely called bishop in our parlance) had just died within hours and I would go to the congregation alone, supported only by neighboring pastors.  It was overwhelming to a seminarian facing a congregation with nearly 800 in attendance and 600 in Sunday school but he was always there to gauge the landscape, guide me with his wise counsel, guard me against hurt or error, and give me praise for my meager triumphs.

My wife and I sat in the parking lot of St. John Lutheran Church on Greene Avenue in Sayville, Long Island, New York, with a U-Haul hitched to the car.  We got there too early for anyone to greet us.  It was a beginning filled with fear.  We were alone for months until the pastor they had called (the Rev. George Finsterle) arrived but we were not alone.  The Rev. Ronald F. Fink was an LCMS District President who took his episcopal responsibility seriously.  Never mind that this Atlantic District had just suffered the removal of its former DP, the loss of 30 congregations in the LCMS split of the 1970s, or that this guy was young and inexperienced in the ways of Synodical politics, he had time for lowly Vicar and his wife.  A lot of time!

The vicarage year came and went and the most strenuous moment of a pastor's life was again upon us -- it was placement day and we would hear where the Lord of the Church had decided to send us.  The familiar face of Bishop Fink was there to tell us where we were going (it was hard to find on a map but it was there, halfway between West Point and Albany, in the Catskills).  At my installation he went into the woods around the church and picked up an old pine branch.  He handed it to me with the words "Guard the flock over which the Holy Spirit has made you overseer (bishop)."  It was not a pretty stick but a working staff -- something to remind me that the bulk of the pastor's work is not pretty but messy.  That stick is 34 years old and every now and then I carry it in to remind me and the people of that day, of the charge, and of the grace of God in which both of us trust.

Ron was a frequent visitor to our home -- well, lets face it, Ron was on the road all the time.  He put more miles on his car in a year than most of us put on a vehicle in five years.  He always wanted to know how I was going, how my wife and eventually kids were doing, and how the parish was doing.  He listened to complaints, gave wise and godly counsel, preached in my parish often, heard me preach often, and was a combination mentor, bishop, and friend.  I always felt bad for Millie and the kids since he gave himself so freely to his pastoral vocation but I think he gave himself as fully to them.  We were no strangers to his home or to his pool.  I learned to make a martini to his liking and we ate many meals together, went to many meetings together, and worked together on many different projects.

When he took a call to Orlando, Florida, I knew things would never be the same again.  And they were not.  I knew and know his successors (Zwernemann and Benke) and they did and Benke still does a good job but Ron Fink remains the epitome of bishop for the Atlantic District.  I have known other DPs over the years and all of them were and are sincere and gifted people but Ron Fink remains the benchmark of pastoral care, episcopal ministry, and faithful DP.

So when I heard that Ron had died, a part of me died as well.  He was my first and best bishop, an honorable man, a faithful pastor, and a great friend.  It had been a few too many years since we last spoke but it really never occurred to me that this day would come when no call could be made.  I will miss him in more ways than I can write here but the impact this man made upon me as a new, green, and terribly inexperienced pastor will never leave me.  Thank you, Bishop, and may your soul rest in peace according to the mercy of God....  I know the picture below is old, but it is the way he looked when I first met him. . .

A wonderful remembrance for a true saint.

Rest in peace, precious friend but more than a friend, our pastor emeritus. Just a poor parish priest! I should be so poor!