Not the first victims of our technology. . . 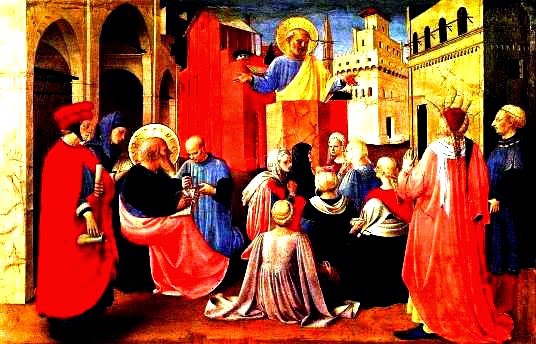 A friend sent me a link to Father Hunwicke's blog and specifically to this posting on the struggle to retain historic orders when new technology (in this case the printing press) had made innovation and deviation not only possible but fashionable.

There are two pervasive myths about S Pius V's liturgical interventions which will doubtless go on being purveyed until the Eschaton.
(1) That he suppressed the local rites of the Middle Ages, only permitting the survival of those which had existed for more than 200 years. He was a centraliser and a standardiser.
(2) That his actions, following on from Trent, are closely analogous to, and provide a close precedent for, what Paul VI did after Vatican II.
Each of these myths is a travesty of history. Each results from a reading of History with the hindsight of knowing What Happened Afterwards, instead of trying to understand events in their own historical contexts. Since devils reside in details, and since I have written before about what he did with his Missal, I shall focus today on what he did to the Breviary.
The papal document Quod a nobis, which introduces the 'Tridentine Breviary', repays careful reading. The Divine Office put in place by Gelasius and Gregory and reformed by Gregory VII had, S Pius tells us, diverged ab antiqua constitutione. So the pope wishes it to be recalled ad pristinam orandi regulam. Some people had deformed this praeclara constitutio by mutilations and changes; an awful lot of people (plurimi) had been seduced (allecti) by the brevity of a Breviary produced by the Spanish Cardinal Quignon. Even worse, in provincias paulatim irrepserat prava illa consuetudo ["that depraved custom"], namely, that bishops in churches which, from the beginning, had used the Roman Office, were producing privatum sibi quisquam Breviarium.
What S Pius V is dealing with here is the chaotic liturgical result of a century of printing. It may be difficult for us to appropriate imaginatively the differences that this invention made. Only in the age of this new technology could trendy clergy buy and use in vast numbers the new slick and fast Quignon Breviary; only now could meddling bishops, full of Good Ideas, thrust their latest clever novelties with ease upon their helpless dioceses. The words of S Pius seem almost to describe the chaos which was to follow under Pius XII and his successors: "Hence the total disruption of divine worship in so many places; hence a complete ignorance among the clergy of ecclesiastical rites and ceremonies; so that numberless ministers of the churches carry out their duty unbecomingly, not without enormous offence to the devout".
S Pius was reacting to to this technology-driven chaos by a reinstatement of Tradition; by the elimination of novelty and by a return to what had been received. Hence, he provided a form of the Roman Breviary carefully emended by the best scholarship available to him. It was, of course, a paradox that his reform was itself carried through by the use of the same technology which had created the problem!! But that paradox does nothing to change the fact that his action was an assertion of Tradition, a repression of innovation.
S Pius V's reform was thus an act of deliberate and profound conservatism. This is shown by his treatment of local usages which dated from well before the invention of printing. . .   [read the rest here]

It was fascinating to me to think of the church in the century following the invention of the printing press having to deal with the same issues of technology that have erupted since desktop publishing.  Here, however, the direction of the church is interesting -- technology breeds innovation, novelty, and invention but the role of the church is in preservation, slowing down the pace of change, and acting as sentinel when the technology gets too far ahead of the church.  That is surely the same struggle we have today.  But, like then, the complaint is centralized authority, the desire to dampen down creativity, and the risk of becoming irrelevant to the progressive world around you.  As it has proven so often, antiquity and a hermeneutic of continuity is hardly a danger to the faith once delivered to the saints and faithfully passed down to the generations that follow but innovation, creativity, invention, and novelty ARE a real danger to the faith.  So I would caution against labeling everything the same -- some preserves and some departs from the tradition of the fathers and this is where we need to pay great attention.
Posted by Pastor Peters at 6:00 AM