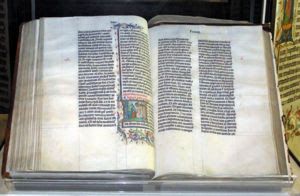 Catching up on some reading, I read the brief column by my esteemed Canadian Lutheran friend, the Rev. Dr. John Stephenson, on the evolution of our view of the word inerrancy.  It is an interesting read.  (BTW if you do not subscribe to Logia, this is one journal to which you need to subscribe and read.)  He begins, of all places with the Roman Catholic Catechism of the Catholic Church (1992) and its own quote from Vatican II's Dei Verbum.  It is a wonderful place to begin:

"The Christian economy, therefore, since it is the new and definitive Covenant, will never pass away; and no new public revelation is to be expected before the glorious manifestation of our Lord Jesus Christ." (#66)

The subtitle before it says simply There will be no further revelation.  St. John of the Cross comments on Hebrews 1:1-2: In giving us his Son, his only Word (for he possesses no other), he spoke everything to us at once in this sole Word - and he has no more to say.

Dr. Stephenson well reminds us that there was a day when Roman Catholic, Protestant, and Lutherans were more or less united in such a statement but no longer.  Rather than herald such convictions, statements such as these have become embarrassments of many of their modern day heirs and require some level of explanation and redirection to allow them to stand at all.  In the Roman Catholic Church, in most of Protestantism, in much of Evangelicalism, and in continental and ELCA Lutheranism, such a view of Scripture is regarded as foolishly naive.  We have become to sophisticated to espouse such doctrine.  So far has liberalism ingrained itself into Christianity that we are no longer sure the Word of God belongs to the Lord, that the Word we have now is anything remotely like it was originally, or that it is anything but a plastic text that evolves, changes, and speaks differently to different people and different times.

Dr. Stephenson chronicles the history and he does it far better than I am able so I will not comment there except to say read his words!  What I will commend on is how things have changed.  Many Christians are no longer comfortable with the very word inerrancy.  While it might have a more recent pedigree among us as Lutherans, it is still a good word and it speaks solidly of our conviction and the reality of Scripture, the written Word of God.

While it might be said by some that Scripture's history and reliability is questionable, this is a modern view that stands in stark contrast with the majority of Christian doctrine and teaching only 50-75 years ago.  It reflects the imposition of doubt upon something that no one doubted from the earliest of times.  Scripture was merely accepted for what it was and is -- the infallible Word of God.  Now the Bible is under assault from within and from without.  Historicity is considered an antiquated concept and we are assured by many teachers today that it does not matter if the Scriptures are true in the sense of fact, their truth is an article of faith divorced form factuality or historicity.  Such a view is not only foreign to the Church prior to the 19th century, it is alien to St. Paul who insists that Christ's resurrection from the dead cannot be myth and salvation remain standing.

You can argue all you want over the word inerrancy but the catholic doctrine and treatment of Scripture affirms the truthfulness, factual basis of, and historicity of Scripture (unless it clearly tells us otherwise).  It may be quaint to speak of Adam and Eve as historical people but it is the company of Christ Himself and His disciples to believe, confess, and teach this.  It is neither fundamentalistic nor sectarian to acknowledge Scripture with terms such as inerrant or infallible.  This is the way every authentic Christian understood the Word of God until at least the 19th century.  We will be held accountable with whom we choose to stand -- with Jesus and His Church consistently through the ages or with modernity and its allergic reaction to the very idea of truth and fact and history.  Dr. Stephenson is right to remind us, inerrancy was once not a dirty word but a word we shared in common as we together acclaimed the Bible to be true and without error, trustworthy and reliable.

What is remarkable is that despite 28 editions of the Nestle text of the Greek New Testament and the remarkable find of the Dead Sea Scrolls and their confirmation of the Old Testament, scholars seem fascinated by the miniscule number of words in dispute over a text, a history, and a content that remains surprisingly consistent, despite generations of hand copying, the advent of the publishing industry and its desire to put to press new and different, and even the internet age in which no text is immune from the tinkering of scholar or amateur.  We do not have a text which causes us to doubt or fear, we have fears and doubts in search of legitimacy.  So deeply have we marked our departure from the saints before us that we snicker at the idea that the Bible is inerrant or infallible.  Perhaps because we have already decided God is neither of these, we are sure that His Word must not be either.  And God laughs at our haughty pride.  For it is written, I will destroy the wisdom of the wise, And the discernment of the discerning will I bring to nought.  I Corinthians 1:9.