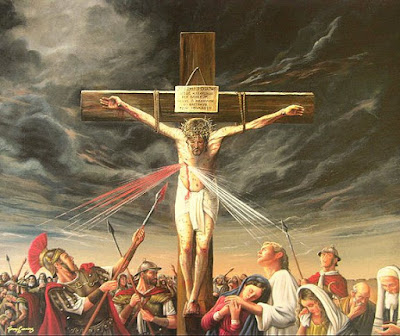 Sermon for Mid-Week Service, based on Luke 18:1-9, preached by Pastor Peters

Two men went into a bar.  Oh, wait, wrong story.  Two men went up to the temple to pray.  This is not a story at all.  This is exactly how things work in the kingdom of God.  Two men enter the House of God to pray.  Both are entering confident of something.  The Pharisee is confident that he is good enough for God.  More than that, he is better than the other fellow who is also praying that day.  The publican, better known as a tax collector, is also confident.  He is sure that he is unworthy of God’s ear or God’s answer.  He is better than no one and worse than all.  He cannot ask God for anything but mercy.
In the end it is kind of ironic.  The temple where these men pray is certainly a house of prayer but they are focused on place in that temple known as the mercy seat.  It lie hidden behind a curtain that was approached but once a year, the day of atonement, Yom Kippur.  On that day the sacrificial blood was sprinkled and the sins of the guilty were forgiven – not because they earned it or deserved it but only because God’s mercy counted this blood as a type of the blood that was to come – Jesus’ blood – that would forgive the sins of the world.
The day when these two men went up to pray, the curtain was closed.  Only the clouds of incense rising from this holiest of holy places gave clue to what was there.  This was not the day of atonement but the incense of the prayers of God’s people was both occasioned by this mercy seat and because of what took place on that mercy seat.
The Pharisee was oblivious of that.  He did not need it.  He was satisfied with his own righteousness and believed that God was happy with him as well.  The mercy seat was all well and good but others needed it more than him.  Thanks be to God!
The publican, however, was there only because the mercy seat was behind that curtain.  He knows that the unique character of God’s House is the mercy signed in blood.  He is a sinner, to be sure, but he is a sinner who knows the heart of God.  He is wise unto salvation because he knows that virtue counts for nothing before God.  Hope lies only in His mercy.
The Pharisee is confused.  He believes that is the world thinks you good, you must be good and God will judge you in the same way.  We are often confused by this.  We think that salvation is for those who have lived a good, Christian life.  We think that the path to a clear conscience is through doing our best all the time.  We think that our earthly success is the result of God’s own approval.
The publican sees God clearly.  It has left him miserable, ashamed, and without any hope EXCEPT in the mercy seat.  He knows that he has nothing to commend him before God, no clear conscience to allow him rest, and no comfort from his earthly success to console him.  But he does know God, he knows God’s heart, and he knows God’s promise.  He has heard the Scriptures.  Return to the Lord, Your God, for the Lord is slow to anger and abounding in steadfast love and with Him is plenteous redemption.  Christ has not come to justify or commend the righteous but to forgive the sinner and redeem the worthless to eternal life.
So, why are YOU here.  Have you come to have God commend you or because this is where the mercy seat of the altar is, where the body broken on the cross and the sacrificial blood shed is given to you to eat and drink?  The only reason we are here is because Christ the mercy seat is here, whose blood washes the dirtiest sinner clean and whose grace redeems the most worthless wretch to everlasting life.  As often as you eat of this bread and drink of this cup, you proclaim the Lord’s death until He comes.
The worship of God begins with knowing His character and ours.  That is what the publican knew that the Pharisee did not.  The Pharisee knew neither who God is nor whom he was.  So he got it wrong on all counts.  He was not righteous and God was not patting him on the back.  But it is a comfortable lie.  And oh how we love comfortable lies.
The uncomfortable truth is the what publican knew only too well.  He knew God was holy and righteous and could not abide sinners.  He knew he was just such a sinner who was without hope or consolation from such a righteous God.  But he also knew God was merciful, that He forgave the sinner who neither excused nor justified his sins.  This publican knew that the mercy of God triumphed over His justice.  He heard the voice of the prophets speaking in promise of the Lamb of God who takes away the sins of the world.  And he was bold enough in faith to ask from God exactly what God had promised.
So do we come.  We are the uncomfortable who find our sins unbearable even though we fail to stop sinning.  We are the uncomfortable penitent who lament not only our sin but our helplessness to save ourselves.  We are the uncomfortable trusting not in ourselves but who believe that blood of Christ still cleanses us from all sin.  And if we come like the publican, we will go home forgiven, righteous, and at peace.  So join me in your heart as we echo his words: God, be merciful to me, a sinner.  Amen.
Posted by Pastor Peters at 6:00 AM