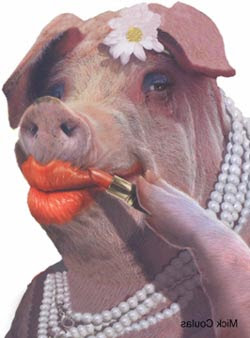 We do a fine job of putting make up on evil, lipstick on a pig, so to speak, that masks and hides the true nature of the evil that is present.  We do this for a variety of reasons.  Few of us really wants to believe that evil is truly evil (we prefer to think of it as ignorance awaiting enlightenment or error awaiting correction).  We also want to believe Satan's lie that down deep we are good, those around us are good, and even our enemies are good.  Since Star Wars we are tempted to believe that the dark side is really a wrong choice that can be undone (if not easily than with some serious work).

That is what we want to believe.  But it is not the truth.  For example, Planned Parenthood has been exposed over and over again for its callous talk of selling the body parts of aborted babies and yet many -- too many -- are intent to believe that this is not as bad as its sounds.  When we watch the gay pride parades with their focus on the flamboyant and erotic, we should believe that same sex marriage is more about changing marriage than opening its societal and governmental benefits to same sex couples who want a traditional marriage.  When we shrug our shoulders at the rise of cohabitation and its acceptability in modern society, we want to believe that these are good people who are just trying to save money or plan for the wedding of their dreams.  When we hear all sorts and kinds of talk about tolerance among the various religions of the world we think it is about the laudable goal of reducing inflammatory rhetoric or getting us to be good neighbors but then we discover its real intent is to rob truth of its truthfulness and leave us with competing private sentiments buried too deeply inside the individual to affect the direction of the community or nation. We want to believe that a little instruction or correction will deal with these evils.  That is not true.

There is evil in this world that does not want anything but to destroy God and His people, to tear down the fragile fabric of our morality and to expose the deceitful lusts of the heart to the light of day with the freedom to do evil without consequence, guilt, or shame.  Evil wears masks, make up, and hides in respectability but this is exactly what makes it so dangerous.

A million years ago The Exorcist thrust upon the scene with its horrific portrayal of demon possession.  We rested somewhat secure in our beliefs that evil revealed itself to us in unmistakable shapes and forms.  It was a lie.  The devil never unmasks himself.  He must be unmasked by the Truth.  In confronting demons, Jesus first acted by exposing them, calling them forth from their hiding places, and forcing their darkness into the light.  That is the thing we need to do in His name in our own age and time.

Pray that we will not lose our nerve.  Pray that we will have the courage to confront darkness and expose evil for what it is.  For if we fail, many more will be taken in by its rotting heart hidden in the face of our own wants and desires.  Christ has not only unmasked evil but given us the Word of Truth so He might continue to unmask and expose evil in our own age and time.  The folks who are taken in by evil might be mistaken or naive but the evil that entices them and us is not simply mistaken or naive.  It is the enemy of God and His people roaring about like a lion seeking whom he may devour.
Posted by Pastor Peters at 6:00 AM

I also worry, not so much about the Church being immured to this present evil world, as that we will simply become immune, uaffected, desensitized. I fear this has almost become the case with cohabitation; if God's Word (Truth) is not applied to these evils, they will only grow, and Christians will become like a bunch of naked mole rats, with skin insensitive to pain/evil.