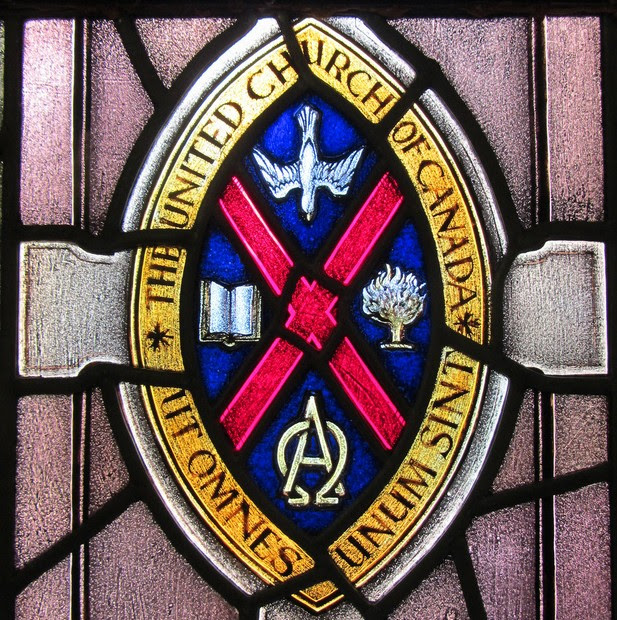 For the uninitiated in Canadian churches, the United Church of Canada is the largest Protestant Christian denomination in Canada (second largest church after the Roman Catholic). It was a merger of four Protestant church bodies in 1925:  the Methodist Church of Canada, the Congregational Union of Ontario and Quebec, 2/3 or so of the Presbyterian Church in Canada, and the Association of Local Union Churches (which I know nothing about). In 1968 the Canadian Conference of the Evangelical United Brethren Church also joined.

As is the case with many, if not most mergers, the resulting church was more a mixture of minimums than maximums of doctrine and practice.  The fruits of that are now being realized as it must figure out what to do with an ordained United Church minister who believes not in God nor in the Scriptures but who is unwilling to go quietly.

At her West Hill church, Rev. Gretta Vosper believes, and her congregation supports her, that how you live is more important than what you believe in.  She was ordained in 1993 and believes that most church doctrine is the result of an outmoded world view.  She believes that Christianity has betrayed its beginnings and built a doctrinal system on mythology -- minimizing the most important things of changed behavior and love.

In 2008 she did away with the Lord's Prayer and lost two thirds of her congregants.  This year she pushed her denomination's leadership when she equated the Muslim extremist attack on Charlie Hebdo with the same kind of misguided actions done in the name of the Christian God.  The problem?  The UCC had never investigated a minister before.  They had no idea how to review whether or not Vosper was failing her ordination vows affirming faith in the God the Father, Son, and Holy Spirit.  More than this, the UCC has always priced itself on tolerance, diversity, and inclusiveness.  How far can a minister go and still be considered within the pale of UCC teaching?  For her part, Vosper is intent upon forcing the denomination to act and insists that if they are no longer welcome within the church, it is because they have "defined us out of it and not because we have defined ourselves out of it."

And that is the point.  We ARE accountable.  Those in the pew and those in the pulpit.  The baptized to their baptismal creed and faith, the confirmed to their vows and promises (to suffer all even death rather than fall away from it), and the ordained to the confessional standard, doctrine, and practice of their church.  It is precisely this accountability which we fear today -- both those exercising oversight and those under their supervision.  But this is in essence the core and foundation of our life together.  Without this, there is nothing to bind us more than sentiment and feelings.  Am I my brother's keeper?  You bet you are.  If you love your brother or sister, you will call them to account -- not as an act of judgment but as an act of the highest form of love.  As a father disciplines his children, so the Lord chastens those whom we love.  This is not the realm of our own arrogance but the very nature of our life together and the test of true love.  Pastors will welcome this and the people of God will likewise rejoice in such love as a mark of the true church and not simply a fellowship of diversity, tolerance, and sentiment which too many churches have become.

I have no idea how the Canadians will do.  I know that my own LCMS has held one of our pastors accountable and it has caused ripples among us.  Failure to act is equally as dangerous as acting arbitrarily or unfaithfully in the role of supervision and oversight.  Until we learn this, our churches will bleed truth until there is nothing left worth believing.  I fear that the United Church of Canada may already be there.

Efforts to achieve unity for numerical strength where there is no doctrinal agreement are bound to fail in just this way. The hodge-podge of denominations that came together to form UCC had no chance from the very beginning.

Why must we bring together disparate groups, under the guise of Christian unity? Christ did pray that all may be one, but His prayer was that we all have the correct faith and understanding which leads to natural unity. Forced unity is of man, not of God.