Rethinking some things about hymnody. . . 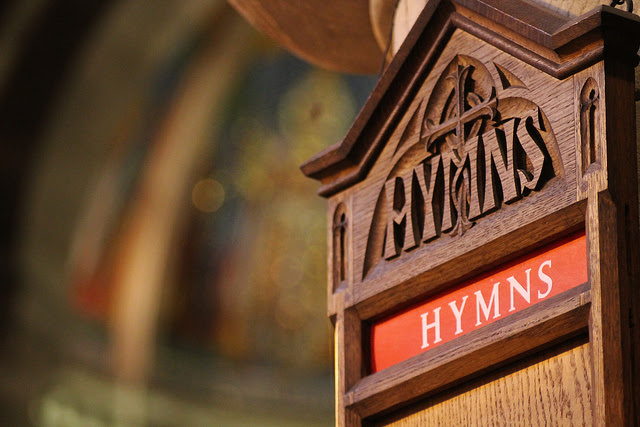 One of the great fruits of the introduction of the 3 year lectionary has been the flourishing of new hymns written to accompany the lectionary texts not previously heard on Sunday morning.  I remain encouraged and enthused by the many and profound texts and tunes that were given birth by the inclusion of so many new pericopes in the Divine Service.  We can and should be grateful for this new birth of hymnody.  Sure, there are those who complain that not all new texts are sturdy nor will all endure.  This is surely true and yet it is not always apparent which texts and tunes survive and which fall away.  Some of these lesser children of the lectionary have endured way past their prime (at least in my estimation) and others have fallen into obscurity before they were given a real chance.  Oh, well.

Though I have lived in tension with regards to the 3 year lectionary vs the historic or one year system of readings appointed for the Sundays, one of the magnets that continually drives me back to the 3 year is that rich flourish of hymnody that has accompanied the move from a one year to a three year system of repeated readings.  That said, I do note that there has been a cost and a high one.

Part of that cost has been the almost universal idea that hymns are primarily, if not universally, appointed to fit the lectionary.  This idea is so pervasive that many of those planning the hymns to be sung find it hard to justify the appointed Hymns of the Day precisely because they do not see the direct textual connection with the readings appointed for that day.  It is true that some of them, many of them, perhaps, are thematic more than textual with regard to the appointed pericopes of the day.  While it is good that we weave together hymns using the readings themselves to draw everything together into a fabric, it is also true that many of the good, even great, hymns of old simply do not relate to a specific text and have fallen into lessor use or out of the realm of the familiar within most congregations.

Lutheran hymnals since the move to English have always struggled with what to do with the hymns of their heritage.  Many of them were non-liturgical (not tied into the lectionary or particularly to a season of the church year) and some of them were a little to directed toward us than we feel comfortable in our God directed idea of Gottesdienst.  Survey after survey of use has shown that our people tend to like and sing more American and English hymns than the Lutheran hymns of our heritage -- almost to the point that we have become strangers to the hymnody that flourished in the post-Reformation period.

The great hymnwriters of old, like Paul Gerhardt, are often unknown to Lutherans today and their hymns (complete with many more stanzas that folks tend to want to sing) are also strangers to our people and to what we sing on Sunday morning.  The hymns we have included have generally been cut and pasted to reduce 12 stanzas to 5 and 20 stanzas to 7 -- thus eliminating some of the hymn's developmental logic and witness.

The absence of a family altar where the family sing hymns in the home, the lack of hymns such as these in use for Sunday school openings, and the virtual absence of the daily offices from parish life have conspired to remove from us part of our best heritage of hymnody and devotion.

What can we do about it?  We can re-introduce our people to their heritage.  Matthew Carver has certainly done a bang up job of translating hymns not previously accessible in English (with all their wonderful peculiarities and many stanzas).  Some hymn writers are becoming more attentive to the need to translate and recast these songs of our past.  The gift of desktop publishing has placed all of their efforts within our reach.  So let us try to reacquaint our people with these strongly vocational, manward oriented, and richly ornamented songs of the faith that are both theologically faithful and rich while also profoundly poetic.  In any case, I am reminded that these sturdy hymns of old deserve a wider usage and will try to keep that in mind as I plan the hymn calendar for my own parish.
Posted by Pastor Peters at 6:00 AM

The reality is that some of the old Lutheran hymns are indeed too long, and many congregations do not have musicians who can play them on the organ. In some congregations only the very oldest members are familiar with the melodies. . Also....it would be difficult to re-introduce some of these hymns to a younger generation of Lutherans. We should be selective about retaining which hymns to use, and which ones must go to the archives. We cannot just sentimentally return to the past. We will be truly blessed to carry forward the core principles and doctrines of the Lutheran Church, but by nature of time...some of our hymns are like old relics and artifacts. We can safely modernize our music carefully, rewriting and revising language which worked well in the past but is no longer feasible for today. It is not a crime or a sin.

Today at church we sang 3 Lutheran chorales, and 1 jaunty tune from the Methodist Harmonist. Lutherans have always had an eclectic and ecumenical bent when we practice hymnody. So much of Luther's hymns can be found to be evangelical amplifications of even older Latin texts and tunes. Even though the Methodist hymn is from the sectarians with whom we have no shared history at all, this hymn has always been a favorite. I sang it with gusto, sigh. But similarly, I and the congregation sang the Lutheran chorales just as well.

The last hymn, was to the tune of "Wachet auf," one of the queens of the Lutheran Chorales. In school choir, I had sung Bach's cantata setting of Wachet auf, so I sang today with much recognition and enjoyment, but noticed that our small congregation was also comfortable and adroit with this "old relic." Since this is a core Lutheran hymn, I suspected that our excellent organist would play a postlude based on this chorale tune, and she did. I was so pleased. :-)

Here is a YouTube link to the Ton Koopman production of Bach's "Wachet auf." It's just as old an old relic as the Methodist hymns (18th century). ;-)
https://www.youtube.com/watch?v=JCULWK4tNuc

Here is another YouTube link to a Bach prelude/postlude setting of the Wachet auf for the organ. It's not the one our organist played, every Lutheran composer writes multiple works based on Wachet auf. But it may signify how palatable an old bit of hymnodic music can be.
https://www.youtube.com/watch?v=5Z_UEeQfk_0

Last comment, I promise. Would you like a modern example of an application of Wachet auf composed in mode modern, something no older than yesterday's leftover lunch, so to speak. Distler is my go to boy for chorale tunes used in modern compositions. A German Lutheran composer of the mid 20th Century who did not survive the National Socialists. The jackboots were on his doorstep when he took a shortcut to eternity.
https://www.youtube.com/watch?v=lqW15K_IcTg

The loss of traditional Lutheran hymndy ultimately comes from a lack of regard and respect for our past - period.

Referencing my comment on the Latin roots of many Lutheran hymns...
A link to Matthew Carver's latest "bang up job," Liber hymnorum, at Emmanuel Press: http://emmanuelpress.us/books/liber-hymnorum/