What would Lutherans think if they witnessed these Divine Services?

Whenever the divine service once again follows the old Evangelical-Lutheran agendas (or church books), it seems that many raise a great cry that it is “Roman Catholic”; “Roman Catholic” when the pastor chants “The Lord be with you” and the congregation responds by chanting “and with thy spirit”; “Roman Catholic” when the pastor chants the collect and the blessing and the people respond with a chanted “Amen.” Even the simplest Christian can respond to this outcry: “Prove to me that this chanting is contrary to the Word of God, then I too will call it ‘Roman Catholic’ and have nothing more to do with it. However, you cannot prove this to me.” If you insist upon calling every element in the divine service “Romish” that has been used by the Roman Catholic Church, it must follow that the reading of the Epistle and Gospel is also “Romish.” Indeed, it is mischief to sing or preach in church, for the Roman Church has done this also. . . Those who cry out should remember that the Roman Catholic Church possesses every beautiful song of the old orthodox church. The chants and antiphons and responses were brought into the church long before the false teachings of Rome crept in. This Christian Church since the beginning, even in the Old Testament, has derived great joy from chanting. . . For more than 1700 years orthodox Christians have participated joyfully in the divine service. Should we, today, carry on by saying that such joyful participation is “Roman Catholic”? God forbid! Therefore, as we continue to hold and to restore our wonderful divine services in places where they have been forgotten, let us boldly confess that our worship forms do not tie us with the modern sects or with the church of Rome; rather, they join us to the one, holy Christian Church that is as old as the world and is built on the foundation of the apostles and prophets.

Clearly the things that make some, perhaps many Lutherans uncomfortable (vestments, chanting, ceremony, etc...) are the things that were once routine and normal among Lutherans.  While no one in their right mind makes this an issue of the thing itself (vestments, chanting, ceremony, etc...), how has our doctrine changed because our practice has become decidedly more Protestant and how has our identity changed because the things once ordinary have become exceptional?  That is the hitch.  Ceremony and church usages are not indifferent things but simply things about which man may not bind the conscience to be saved.  They are not indifferent at all but are the practice or public shaped of our belief, confession, and dogma.  For those who disagree, why do we Americans get so excited when someone burns our flag?  When a football player refuses to stand at the national anthem?  Only a fool says ceremonies don't matter.  Only a legalist insists that they matter enough to require them in order to be saved.  A Lutheran loves the ceremonies and church usages (our confessional terminology) that mirror in action what we believe in words. 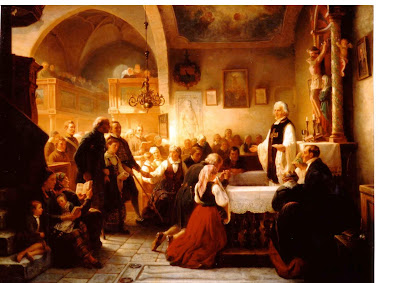 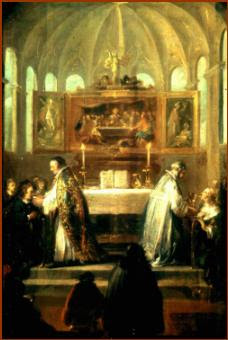 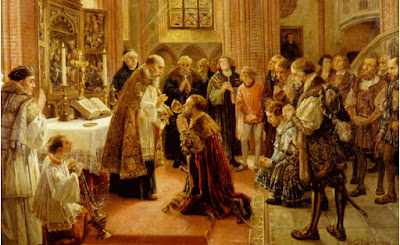 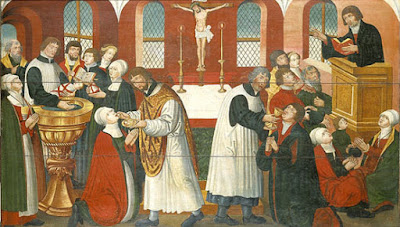 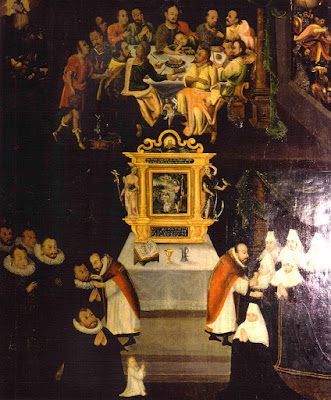 Perhaps it is this lack of ceremony and ritual (not theology) that sends some Lutherans across the divide to Rome? Practice is a distinguisher (is that a word?). Practice is what causes Lutherans to accuse pastors, churches and believers of being RC. If the average Lutheran (or Protestant, for that matter) knew enough theology to distinguish a Mormon from a Presbyterian, this might not be such an issue.

I got into it with a couple of lay folks when I finished Dr. Just's "Liturgy: Yesterday, Today and Forever" when he explained the significance of having the Crucifix on the altar. These ladies objected that "my Jesus is risen and not on the cross". My explanation got nowhere, as they had already decided that a crucifix is "Roman". When I pointed out that every Lutheran Church I visited and/or served in Poland, Lithuania, or Germany has a Crucifix on the altar; and if memory serves there is also a Crucifix at Trinity Lutheran in St Louis. Is that correct? Anyway, this is another very sad vestige of the era in the 1950's when we Lutherans wanted to be just like the Presbyterians with the individual communion cups, the black robes, the INfrequency of celebrating Holy Communion, etc.

While Vatican II did help some of us convince our congregations that Liturgical Renewal could be Lutheran too, the damage was done. Just like the LCMS will not get over Seminex until God calls all of those who lived through it home, so too perhaps those whose Lutheranism was defined as "not Catholic" will accept much of the richness of the Divine Service of the Reformation Era as it is described in our Confessions under "The Mass". I will be in heaven by then, but I never give up hope.

There is nothing more fitting to place on a Lutheran altar than a crucifix. It is a vivid, visual reminder of St. Paul's injunction in 1 Corinthians 11: "For as often as you eat this bread and drink the cup, you proclaim the Lord's death until he comes." We have an apostolic command to remember Christ's death; why not show it with that blessed emblem?