Christ the Door to the Sheep and their Good Shepherd. . . 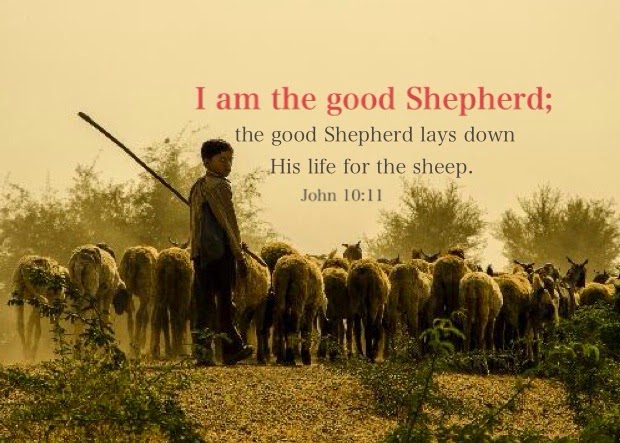 In the old movies, if you wanted to gain entrance into a speak easy or gin joint or poker game, you had a secret knock at the door.  A slide would open and you might repeat a secret code word or drop a name.  Then the door would open.  Too many of us treat the Kingdom of God as if it were some clandestine or hidden secret that required some special knock or secret code to gain entrance.  But not according to Jesus!  He is the door, the gate, the entrance.  His sheep know Him and He knows them.  And that is the radical promise of salvation.
The world is filled with lying strangers trying to steal.  They come to steal your hearts from the Gospel.  They whisper lies into your ears to entice you from the Good Shepherd.  They come to kill your hopes of eternity by distracting you with visions of today that just might seem enough to satisfy you and make death acceptable.  But they come only to destroy.
They come to tempt away the sheep, to steal the lambs born of baptismal water, to scatter and destroy the flock.  And the truth is we have all given into the lying voices of these strangers.  We have been tempted by other flocks and false shepherds.  Our sinful hearts by nature hearken to the false shepherds but fear the voice of God calling – it is sins lasting gift to each of us.
Jesus warns us.  Do not listen to them.  Their abundant life is a lie of health, wealth, and happiness gospels without truth or hope.  They would lead us to exchange the cross for a moment of good feelings and a lifetime of guilt, to surrender eternity for our best life now.  They have no door, only a dead end.
There is only one Good Shepherd.  We know Him by the power of the Holy Spirit.  This is the Shepherd who calls you by name.  This is the Shepherd who leads you from sin to forgiveness, from evil to righteousness, and from death to life.  He has not come to destroy you but to save you.  He saves not by hidden wisdom or secret knowledge but by the clean and plain witness of His blood shed and His life sacrificed for you.  He does not want to steal you but to guard you.
There is only one Good Shepherd who has won life from the jaws of death and who gives you this life not as a temporary treasure but an eternal gift.  He gives you not a life of abundance but a life abundant with the power that death cannot touch.  This life is not measured in dollars or pleasures stolen for a moment and that then must be guarded, no, He gives you freely His own life into your death and His life that death cannot touch.  He is the path, He is the door, and He is the destination.
Scripture tells us over and over again that people did not understand Jesus.  It isn’t because Jesus is hard to understand. It is because our sinful natures do not want to hear and do not want to understand.  The health and wealth preachers, the fake shepherds, appeal to us and their goal of happiness is exactly what we think we want and need.  Until we stand in the cemetery with tears that refuse to be consoled or in the shock of a diagnosis we hoped never to hear.  Until we stand in the shame of our sins found out and our evil hearts revealed.  Then a long life well lived is not enough and we yearn for that which the world cannot give and hireling shepherds cannot deliver.
And that is exactly what Jesus has come to deliver.  The Gospel is not secret wisdom but the sark and blunt truth of the cross.  It is not a nice shepherd who gives us what we want but a Good Shepherd strong enough to carry the weight of our sin and save us.  The door to salvation is not the door you must open but the door Christ has opened for you by His obedient life and life giving death and mighty resurrection.
Repent.  Give up the guilty pleasures of personality cults and TV preachers and internet gurus and pop gospels that are fake, that will destroy you.  Repent.  Return to the one Good Shepherd who fulfills Ezekiel’s promise and who walks before you the way of suffering that you may follow in the way of hope. He is not good because He is nice.  He is good because He alone died for your sins and rose for your justification.
Dear people of God, listen to His voice because He calls Your name.  He has washed you in the still quiet waters and led you to the rich green pasture of His Word.  He has set His table before you in the presence of Your enemies.  He hides nothing and makes all things plain.  He is the Good Shepherd, the door to the sheepfold.  Enter by Him and you having nothing to fear. Believe Him and follow Him.  He will create in you a clean and new heart.  He will teach you how to be holy.  He will teach you heaven’s wisdom.  He will school you in the commandments.  And He will create in you the will to follow Him, the ears to hear only His voice, and the joy that sorrow cannot diminish.
Christ is Risen!
Posted by Pastor Peters at 6:00 AM