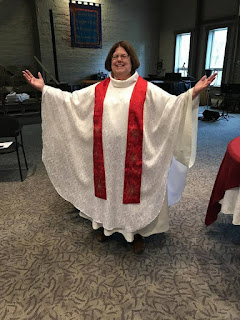 According to a Charlotte Observer story, another group has claimed to ordain a female priest in the Roman Catholic Church.  The only problem is that the woman who was ordained, maybe even the so-called bishop who ordained her, had been Roman Catholic lay people at one time but that lends nothing to their action or to its legitimacy.  According to the news release, the Association of Roman Catholic Women Priests, 250 women in 10 countries have been ordained as Catholic priests. In the United States, it said, women priests serve in 65 “inclusive churches.” That includes women priests affiliated with the association and with a second allied group – Roman Catholic Women Priests – that has the same mission.  The only problem is that none of these are recognized by or in full communion with the Roman Catholic Church.

An international group defiantly opposed to the Roman Catholic Church’s ban on women priests Sunday [April 30, 2017] ordained its first woman Catholic priest in the 46 counties that make up the Catholic Diocese of Charlotte.

The ordination ceremony for Abigail Eltzroth happened in Asheville at Jubilee! – a nondenominational faith community – with Bishop Bridget Mary Meehan presiding. Eltzroth, 64, said she is the second woman in North Carolina ordained by the rebel group, called the Association of Roman Catholic Women Priests.

The article notes:  Many, but not all, Protestant denominations in the United States have women clergy. The Episcopal Church and the United Methodist Church do, but most Southern Baptist churches do not. The Evangelical Lutheran Church in America ordains women, but the Lutheran Church-Missouri Synod does not. And the Presbyterian Church (USA) has women clergy, while the Presbyterian Church in America does not.  So, why did the woman not join one of those who does ordain women?  It is not like she has a shortage of choices.

My point is this.  The media love to flaunt those who live outside of or on the fringes of the churches because of their rebellious or heretical positions or actions.  That says little or nothing about those churches.  Not Missouri Synod Lutherans who choose to support the ordination of women in a church that does not, who see Adam and Eve as mythological characters in a church that believes them to be real people, or who believe everyone and anyone ought to commune in a church that practices close(d) communion.  The media is simply trying to corner churches into a gotcha position and since it accords with the media's own bias against objective truth, doctrinal integrity, and the like, they delight in false and misleading headlines like Rebel Catholic Group Defies Church - Ordains Woman in NC.  I wish the media were smart enough to know the difference between fake news and real news.  It should have been clue enough WHERE she was ordained that she was not ordained as a Roman Catholic Priest, but that would have ruined the headline and emptied the story of its steam.  Even Francis has not gone that far, for pete's sake, but if they are not smart enough to distinguish between the trivial and titilatious [why is THAT not a word?], you ought to be.


The The
Read more here: http://www.charlotteobserver.com/living/religion/article147737594.html#storylink=cpy
Posted by Pastor Peters at 6:00 AM

No surprise here. Again, Satan's unrelenting agenda is to wear down and tear down, to destroy the institutions that threaten idolatry. Are we, LC-MS Lutherans, really united in spirit when it comes to the sanctity of human life beginning at conception and ending in natural death? Are we united in spirit on the theory of macroevolution and man-made climate change (in view of God's promise alone in Genesis 8:20-22)? Are we united in spirit in the bond of peace regarding same-sex marriage? Are we united behind the Lutheran Confessions as a pure exposition of Holy Scripture and so what if they are? Are we united about the marks of the church, the office of the ministry, and the liturgy that flows naturally from them? Only persistent and patient teaching (of doctrine) from the Holy Spirit will bring to the Synod unity and peace. I am willing to leave my church over the unresolved issues of COWO, open communion, and women elders. I feel squeezed, and so few seem to understand or care why all this stuff matters.
Kyrie eleison